46′ – Hounds open 2nd half drawing a free kick. Forbes takes it, ball into box for Greenspan who redirects to Dos Santos who’s shot is saved by Kempin.

Wow. Jose Angulo strikes at Highmark again! Catches Hounds keeper Lundgaard off his line and bends it in from distance!

63′ – Velarde gets a nice feed on left side of box — tries to bounce it past Kempin, but shot is saved!

Bends it in from the top of the box! Hounds take 2-1 lead. That’s 20th all-time goal for the Scotsman in Highmark Stadium.  Assist from Anthony Velarde

75′ – Subs — Velarde and Kerr are out, making way for Mouhammad Dabo and Noah Franke.

84′ – Hometown boy Robbie Mertz is the Hounds final sub. In for Neco Brett.

1′ – In the lineup for Hartford includes both former Hounds, Jose Angulo and Ray Lee.

4′ – Columbus Crew loanee Luis Argudo in his first start with HFD, making an early physical play on Jordan Dover, knocking Hounds outside back to the ground. No call

9′ – With Dabo out of the lineup, Thomas Vancaeyezeele is playing in the holding MF spot tonight and Kenardo Forbes dropping back there too. Kerr, Velarde and Brett are all in attacking MF spots. Dos Santos at the top.

10′ – Phillip Rasumssen played a nice through ball, between Adewole and Greenspan, but lunges on shot attempt that goes over bar.

Hounds patient in possessing it in the final third, swing it around to Kevin Kerr, who delivers a perfect ball in the middle of the box to Dos Santos who outjumped a pair of defenders to head the ball into the net.

20′ – Brilliant ball through by Forbes, who drew a few defenders, for Dos Santos, but the low shot is right at Hartford keeper Jonathan Kempin.

34′ – Alex Dixon blows by Adewole and Ryan James to end line on right side — sends a rolling cross into the six. Angulo’s there, but not ready quickly enough for it and Hounds dodge a bullet.

39′ – Dos Santos playing some 1-2s with James — and on getting ball back, sticks leg out and draws foul. Another FK coming. Kerr takes it, but its headed away.

43′ – James finds Brett — but after keeper Kempin comes out to take away shot angle, Neco slide ball through the six for nobody. 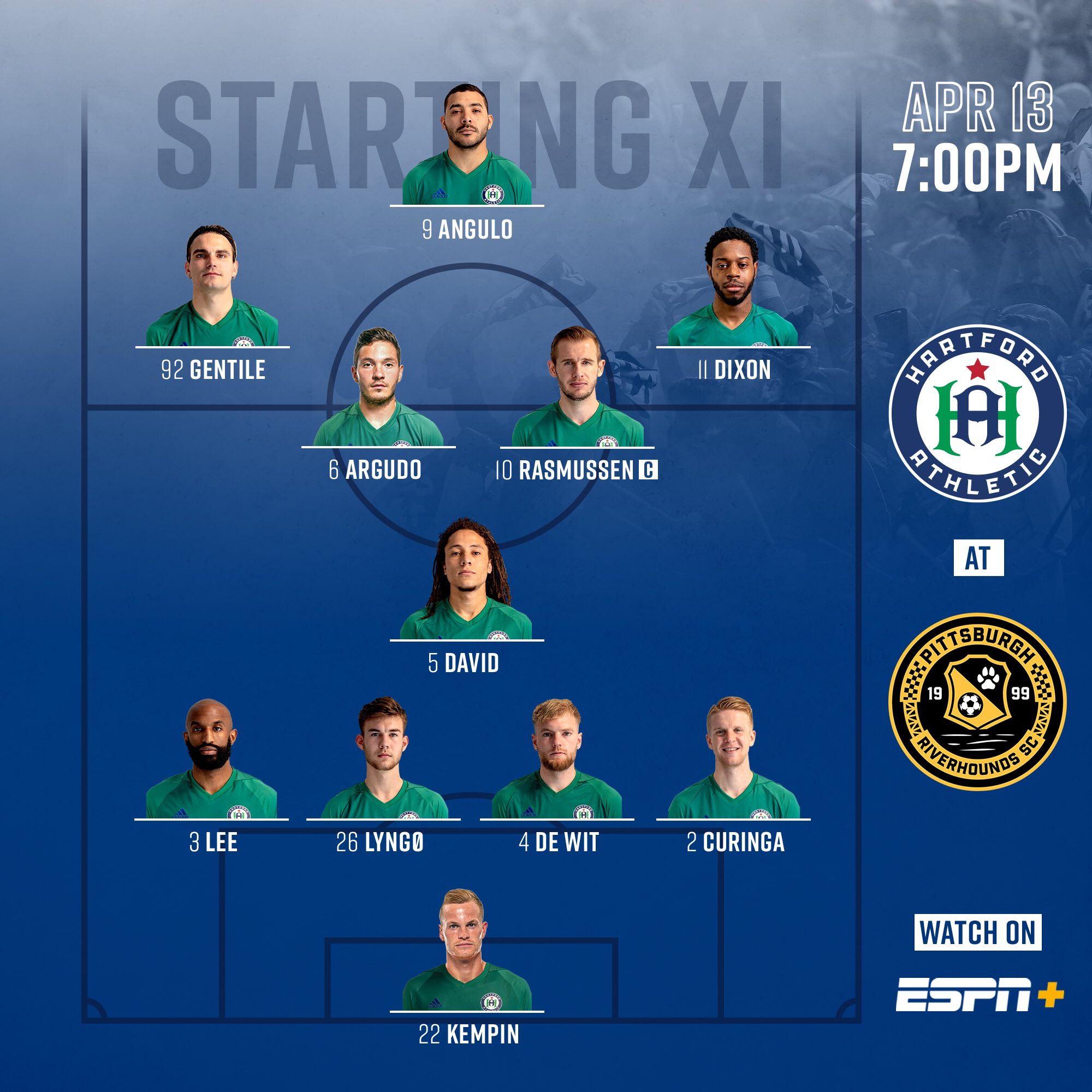 Well no surprise.
Spring road construction in Pittsburgh. On Carson right by @highmarkstadium. Wonderful to see them tearing up road on day of @RiverhoundsSC home opener. pic.twitter.com/eODo0LhjNv

View From The Booth: A touch of ‘sophistication’ is the goal

“Words can’t express how excited I am,” Adewole said. “It’s been very long, these last couple months we’ve been practicing in Coraopolis. So it’s good to get on our feet at home and get the ball running. I’m excited to see all the new fans how they open us up.”