NCAA DII Men’s Soccer Final Four: How they made it to Pittsburgh Once again, Pittsburgh will be hosting the NCAA Division II Soccer Championship weekend. Expect to see some very high level soccer once again at Highmark Stadium on Thursday and Saturday on the men’s side.

Here’s a brief run down of Thursday’s match-ups, and a little bit more on each team.

None of these teams made it to Pittsburgh a year ago, when Barry University defeated West Chester in the Final., but there’s some significant DII championship pedigree in this quartet along with a Cinderella story.

Charleston (20-2-1) has maintained its status as one of the nation’s top defensive teams this season, with five shutouts in five post-season matches.  Early in the season, head coach Dan Stratford decided to make one big adjustment — switching from playing with three center backs, to playing with a flat four back line — with two center backs.

Remarkably, this season is the third straight that UC has allowed fewer than 10 goals. The Golden Eagles allowed just seven in 2019 and eight in their national championship year of 2017, when Vancayeazeele earned Division II National Player of the Year status, and in its non-Final Four season, they just surrendered a staggering four in 2018.

“You recruit these players and you obviously have an idea of what they’re going to bring and what their strengths are and what positions they play,” Stratford told the Charleston Gazette-Mail. “But until you work a couple weeks with them and you really get to know what they are and what profile of player it is, you don’t know for certain.

After a 2-0 loss at Bellarmine early in the season, Stratford changed things up defensively. The Golden Eagles allowed five goals the rest of the season and never allowed more than one goal to an opponent in a match. UC’s 2-0 win over Franklin Pierce in the national quarterfinals was UC’s 16th shutout of the season.

ICYMI: For the fifth time in six years, @ucwv_msoccer is heading to the NCAA D-II Final Four.

The Golden Eagles had their last workout at home before heading to Pittsburgh to face Lynn (FL) on Thursday. @KeithMorehouse pic.twitter.com/tj5SWAM3ZM

Stratford admitted that it took some convincing – of both the players and himself – to change what they did defensively. After all, when something like UC’s three center back system works as well as it has, why mess with a good thing?

While the Golden Eagles have been impressive defensively, they’ve also scored 82 goals — with senior forward Freddy Tracey, from Sheffield, England, as the team’s leading scorer with 13 goals and 3 assists.

Who knows, we might be seeing another player from this squad who could follow in the lineage of Charleston alums who have made a living playing at Highmark Stadium?

Lynn and Charleston (WV) could be heading for yet another memorable postseason showdown. The two met in the championship match in both 2014 and 2017 which each team winning one.

Head coach John Rootes will be going to his fifth Final Four and is in pursuit of his third National Championship after winning in both 2012 and 2014.

Lynn avenged its only loss of the season, by beating conference foes Florida Tech in the NCAA tournament’s Sweet 16, 1-0, after losing in the Conference final.

Two days later, they won its Super Regional, with a dominating 3-0 win against Wingate.

Lynn secures the NCAA D-II Super Region Two Championship and advances to the National Semifinal for the first time since 2017.

Leading the way for the Fighting Knights have been a German forward combo of Levin Sandmann (10 goals and 5 assists) and Lukas Ostermann (9 goals and 4 assists) while junior Alexandre Horveno, from France, has been the play making midfielder, generating 12 assists this season.

This is the Cinderella team of the tournament. UIndy’s making its first-ever appearance in the National Semifinals.

UIndy has compiled one of the NCAA Tournament’s best storylines of 2019. As the No. 9 seed in Super Region 3, the Greyhounds earned an at-large bid with a 12-5-1 season. The team upset three opponents en route to the Final Four. The most impressive of these wins came in the Second Round when the team knocked out the region’s No. 1 seed, Lake Erie.

In that game, the Greyhounds struck in the 6th minute and never looked back. After midfielder Jakub Olczyk scored, he found the net again in the 55th minute, putting the Hounds up 2-0. UIndy’s defense was strong throughout the match. Goalkeeper Miles Palmer only had to make two saves during the game.

The Greyhounds continued their upset streak on Sunday against the 17th-ranked Saints of Maryville. A costly deflection off the boot of a Saints defender just outside the box found the back of the net, costing the team a ticket to the national semifinal.

The Greyhounds’ success this year has been anchored by a dynamic pair in the Steinwascher brothers (who have a sister also playing in Pittsburgh this weekend for Grand Valley State!). Javier and Alejandro Steinwascher respectively rank first and second on the team in goals, assists and points, and they have been a key force behind UIndy’s unlikely run through the NCAA tournament.

A 5-foot-11-inch sophomore, Alejandro has enjoyed a highly respectable season, racking up six goals and five assists. He ranked in the top-ten in the GLVC for assists per game while his brother led the conference in the same stat. However, it’s not only the conference that senior, Javier, has led.

Javier’s assist per game mark leads the nation, as the 5-foot-7-inch forward has notched 19 assists through 19 games. However, play making isn’t Javier’s only skill. With 14 goals, he is second in his conference in total goals, while ranking in the national top 30 in goals per game. His 47 total points rank him 6th in the nation, and no one in the GLVC has topped him. 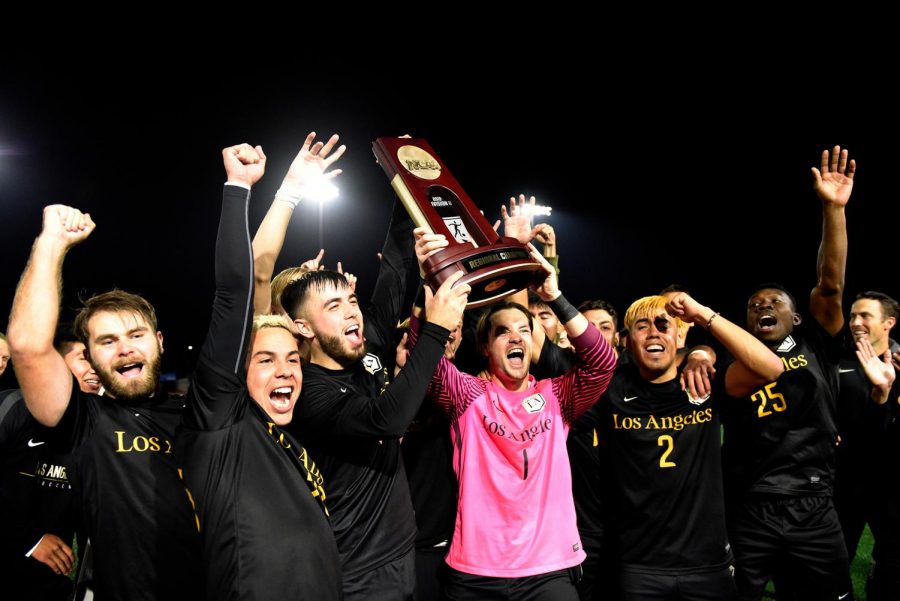 Entering this weekend as the top seed is Cal State LA, who’ve had a historical season – as they were able to celebrate with their home fans on Saturday after an exciting 2-0 win over Cal State San Bernardino on Saturday in University Stadium.

The Golden Eagles have outscored its opponents by a whopping 47-8 advantage this season. That’s an average goal output of 2.24 goals per game.

They’re also led by a sibling tandem, Jorge and Jose Orellana, who’ve together have been key in defending (one as center back, and other as holding midfielder). The rest of the squad features a balanced scoring attack with three players (David Elizaga, Robin Lindahl and Tim Kelfisch) leading the team with seven goals apiece.

Now, they’ve made the trip to the ‘Burgh hoping to close the deal on a first-ever National Championship.  The Golden Eagles (18-0-3), are the lone unbeaten team in the nation, thus earning the top seed when the NCAA announced the re-seeding for the Final Four on Sunday.

Cal State LA will be seeking its first appearance in a national championship game since 1981 and just the second in program history.

Members of the Shadyside Boys and Girls Club and City of Pittsburgh firefighters will unveil the American flag at Saturday’s matches.

SportsPittsburgh has partnered with Slippery Rock University to serve as hosts for the event.

Road to Highmark: Field is set for NCAA Division II men’s and women’s national semifinals
NCAA DII Women’s Final Four Preview: How they got to Pittsburgh