The number one ranked Pitt men’s soccer team held off Duke’s late second half push to earm a 2-1 victory in the ACC Championship quarterfinal round match Sunday night at Dail Soccer Field/Track Complex.

“It was a tremendous game for us considering the situation, coming back and pulling out a win in a big time game,” said head coach Jay Vidovich. “I am proud of the effort our guys showed out there and the personality of the steel weathering the storm. We found goals when needed to and it was overall a tremendous effort and a big step for the program.”

Duke controlled the early portion of the game, totaling three shots and one shot on goal in the first seven minutes of the game. Pitt, who last played October 23rd against Louisville, started to find its rhythm on the offensive end and capitalized in the 34th minute. The Panthers went on the attack in the middle of the field into Duke territory. Noel found Walti on the left side of the 18-yard box, who used his right foot to find the far post for the game’s opening goal.

The Panthers came out firing early in the second half, as both Noel and senior Alexander Dexter had shots on goal from five yards out. Duke knotted the contest up at one all in the 59th minute, as Stephen O’Connell gathered a rebound off a save from graduate student Nico Campuzano and found the back of the net.

Pitt answered back quickly, courtesy of Noel in the 62nd minute. Collecting the ball off a turnover, freshman Filip Mirkovic passed up-field to Dexter, who ran along the left sideline and crossed it in to Noel for the goal.

Duke put the pressure on Pitt’s back line late in the second half, forcing three shots including one that hit the cross bar in the final six minutes. The Panthers held off the Blue Devils’ late push and clinched a spot in the ACC Championship semifinals with a 2-1 victory.

Duke finished the game with a 15-12 shot advantage, only the second team to outshoot the Panthers this season (Virginia Tech). Duke also edged the Panthers in corner kicks, 6-5. Campuzano collected two saves in a complete game effort.

And then there were four 💪

See you on Wednesday for the Semis! pic.twitter.com/hy80L2DRkJ

Pitt next plays Notre Dame Wednesday, Nov. 18 at 8 PM. The game will be held at the Dail Soccer Field/Track Complex in Raleigh, N.C., and will be broadcast on the ACC Network.

Up next for Pitt, will be Notre Dame.

On to the ACC Championship semifinals ‼️

A few times Duke brought pressure, and despite some shaky moments playing it out of the back, Pitt kept its composure and held enough possession late to hold on for the win.

While Pitt allowed 15 shots, they only allowed three on frame.

It was Matthias Frick who was sent off.

For all their accolades, Pitt has allowed a goal in every game this year, including tonight. Defending in ACC is tough. They're hanging on now in late stages. #ACCMSoccer

Peperak, who played at Connellsville, being used at the top of the formation to keep high pressure on Duke’s back line.

. @jtyardley noting that Pitt 'has made two subs – you don't see that too often'. Luke Peperak, Matt Bailey on. Before today, Bailey had 222 minutes this season, Peperak had just 21 min.

Jay Vidovich has kept the same XI on the field most of the year.#H2P #ACCMSoccer

The sophomore answers with a goal on a nice ball from Alexander Dexter.

Mirkovic found Dexter who played it through to Noel.  Val is the first player in program history to score a goal in four consecutive contests.

61' Dexter down the wing, slips the perfect pass to Valentin Noel, and the Panthers are back on top 2-1.#H2P #ACCMSoccer pic.twitter.com/VuyhQsvFBU

Pariano ➡️ @steveoconnell31 and the Blue Devils TIE IT UP 👏👏👏

56′ | Duke called for its fourth yellow card of the evening. Pitt leads, 1-0, over the Blue Devils 11 minutes into the second half.

49′ | Pitt has forced its way into the box twice, putting two shots on goal early in the second half. Both teams have eight shots on the evening.

35' Jackson Walti on the break gets the goal, and #1 Pitt are on top of Duke 1-0!#H2P #ACCMSoccer pic.twitter.com/Beo2vBKBTO

33′ A nice long diagonal in to Petkovic, Dexter tries a funky back heel but doesn’t get enough on it.

29′ Very good man marking by Duke all over the field. Pitt isn’t getting much time to play through, and it’s keeping them from their normal crisp and dangerous attacks.

22′ Veljko Petkovic steps in front of a pass in the Duke half and whips it in. Duke’s defender turns it away, but it earns Pitt another corner. They can’t convert, though.

15′ Pitt has a free kick, turned away by the GK, then a corner, a reset and cross, and a blocked volley from the corner of the 18-yard box all in about a 60-second interval. Good looks, all.

13′ Yellow Card – Duke’s Mattias Frick brings down a Pitt attacker in an advanced spot and Soren Stoica pulls out the book again. That’s two CBs for Duke and two cards with yet a lot of soccer still to go.

8′ Yellow Card – Duke’s Antino Lopez goes into a slide tackle late on Valetin Noel, gets his leg, and a card. Noel not hurt.

7′ Alexander Dexter gets downfield for a long diagonal out of the middle, but he’s offside. That’s the second time we’ve seen that situation transpired in just a short period of time.

5′ Duke pressing aggressively in the Pitt end, and it’s keeping the Panthers off balance.

Pitt earned the number one seed out of the North Region for the ACC Championship, the highest seed in program history. The Panthers finished the regular season 5-0 and 4-0 in league play. 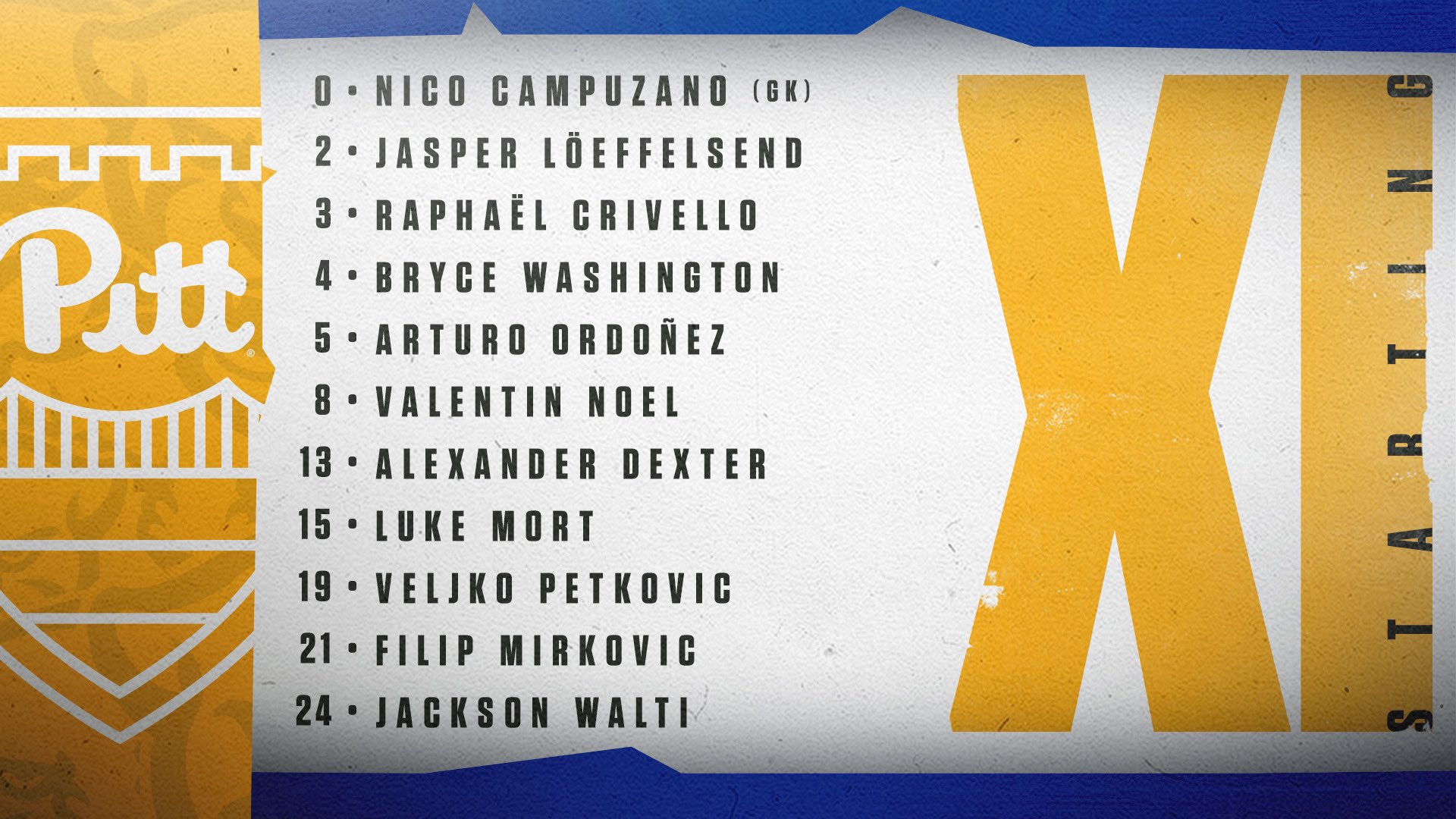 Received this statement from Pitt athletic dept around 5 p.m.

"Pitt has two players who will not be available for today’s men’s soccer game against Duke due to COVID-related protocols."

Tomorrow at 6️⃣ PM, the No. 1 Panthers take on the Blue Devils in the ACC Championship 🏆 quarterfinals ⚽️#H2P pic.twitter.com/Pygqb32GlV

GAME NOTES FROM UNIVERSITY OF PITTSBURGH

–          North Region No. 1 seed and No. 1 ranked team in the country Pitt squares off against the No. 4 South Region Duke Blue Devils in the quarterfinal round of the ACC Championship Tournament Sunday, Nov. 15.

–          The number one seed is the highest seed the Panthers have received in program history at the ACC Tournament.

–          All quarterfinal and semifinal games will be televised on the ACC Network, with the championship round aired on ESPNU.

–          This year has been a milestone season for Pitt, setting new program highs and making school history.

–          The Panthers earned a ranking of number one in the country on Oct. 20 for the first time in program history. Men’s soccer joins football and men’s basketball as the only Pitt athletics teams to earn the No. 1 spot in their respective polls.

–          Four of the five victories for the Panthers have been on the road. Pitt has won its first four road games of the season for the first time since 2000.

–          Sophomore midfielder Valentin Noel has led the offense this season and leads the nation in multiple categories.

–          Noel has scored a goal in each of his last three contests, becoming just the fifth Panther all-time to score in three consecutive games. The last player to do so was senior forward Alexander Dexter (2017) and a goal against Notre Dame will make Noel the first player in program history with a score in four-straight contests.

–          The Frenchman totaled three points in each of his first three games, with highlighted moments including a goal at both Notre Dame and Syracuse and three assists at home vs. Virginia Tech.

–          Jacquesson ranks number one in the country in assists per game (1.00), second in game-winning goals (2) and tied for first with teammate Jasper Löeffelsend total assists (5).

–          Pitt heads into the ACC Tournament with the number one scoring offense in the country, averaging 3.40 goals per game.

–          In five matches played, Pitt has scored at least three goals in all of them, including four goals in two contests (Virginia Tech, Louisville).

–          With an assist at Syracuse on Oct. 6, senior Alexander Dexter is now tied for second in program history with 14 career assists.

–          The last time these two teams met, Pitt scored four unanswered goals to come from behind and defeat the Blue Devils at home, 4-3, on Oct. 25, 2019. Sophomore Veljko Petkovic, junior Jackson Walti and senior Alexander Dexter all scored in that game, with Dexter’s being the decisive game-winner.

–          Duke enters the quarterfinal with a 2-5 overall record and 2-4 mark in ACC play. Both of Duke’s victories came against NC State, with all of its losses to teams who have been ranked in the top-five this season (Clemson, Kentucky, North Carolina twice & Wake Forest).

–          The Blue Devils enter the contest fourth in the nation in corner kicks per game with 6.14. They have also totaled seven assists, good for 10th in the nation.

–          Graduate student Jack Doran leads the Blue Devil offense with three goals, a number that is ninth in the country. Doran has tallied eight shots, six shots on goal, a .750 shot on goal percentage and one game-winner.

–          Senior Daniel Wright and freshman Nick Pariano have totaled four points, with Wright second on the team in goals (2) and Pariano with a score and two assists (team-best).

–          A win for the Panthers would advance them to the semifinals against the winner of two-seed North Carolina and three-seed Notre Dame.

–          All quarterfinal and semifinal contests will be aired on the ACC Network, with the championship game aired on ESPNU.