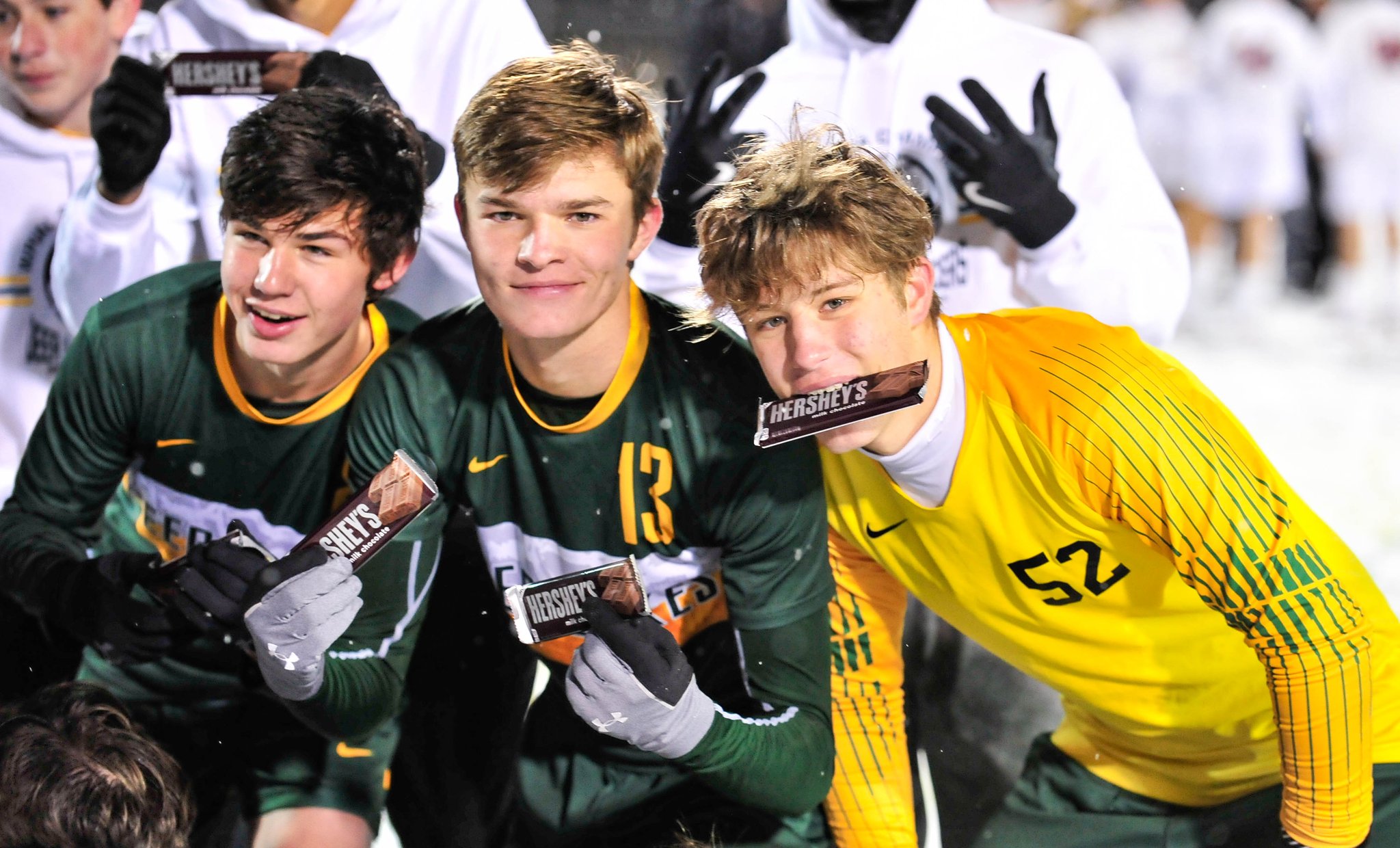 Mad respect to the Deer Lakes Student Section @dlhslancerland that sat in the cold and snow for almost 3 hours tonight. Pictures were taken pretty much in a "white out", but turned out pretty good. Great student section. @DeerLakesAth @BoysLakes @deerlakessd @pghsoccernow pic.twitter.com/bgT2uieGGe

BOOKED OUR TICKET. WE LIKE CHOCOLATE. 1-0 win over Cumberland Valley. Goal from Nathan Prex assisted by Mason Baldwin. We will compete in the state final Saturday. #WPIALSoccer @TribLiveHSSN @pghsoccernow

RAIDERS WIN!! On to the state finals!!! pic.twitter.com/MFpoQ32mGM

@BoysLakes @DeerLakesAth slide right into the @PIAASports championship game tonight with a big victory in the elements over @fairview_tigers. The Lancers will play Saturday in the PIAA State Championships in Hershey. See the recap at @pghsoccernow #WPIAL #PIAA pic.twitter.com/TZzeZB1VMI

GOAL! Nathan Prex scores off an assist from Mason Baldwin with 23:22 remaining in the first half. Raiders lead Eagles 1-0.

The goal came from a corner kick that Mason Fabean directed back across the frame and Carlos Dennis clean up and snuck it by the Brockway defense. @pghsoccernow

6 min left in the game@GCC_Centurions

We are at the half as GCC and Brockway are tied 1-1 in the Class A semi-final. @pghsoccernow @GCC_Centurions

Just like that on a quick free kick Brockway's Jared Marchiori makes 1-1 with 13 minutes left in the first half. @pghsoccernow @GCC_Centurions

It’s been a while since a boys program from the WPIAL won the PIAA’s highest classification title.

The WPIAL Champion Raiders got off to a good start in trying to be the first team from the district to return to the PIAA final since they were there in 2015, losing to Central Bucks East.  On Saturday, Seneca Valley exploded in the second half, scoring all of its goals in the final 45 minutes in beating State College, 6-0.  Once again, George Williams’ squad used a heavy dose of squad rotation to wear down State College.

Even with an impressive 16-1 record, Cumberland Valley may have had some fortune to have earned a spot in the state playoffs due to Manheim Township’s forfeit of the District 3 championship game, but they made the most of things in their PIAA opener on Saturday, shutting out District 4 champion, Williamsport, 1-0 and getting a timely, late second half goal.

Now the two teams will meet at a fairly equitable halfway point — in Altoona with a spot in the PIAA final at stake.

The winner plays the winner of Neshaminy/Emmaus on Saturday, at HersheyPark Stadium at 6:30 p.m.

Mars will face a Cathedral Prep squad that can light it up.  But of course, Chris Knauff’s team has seen this type of challenge already, having beat an immensely talented Franklin Regional in the WPIAL Final, 2-1.

On Saturday, the FIghting Planets rolled to a 4-1 win against District 6 champion Holidaysburg.

The Ramblers opened the PIAA playoffs with 13 goals in a win over DuBois on Saturday.

Saturday. Jack Foht, a Division I prospect, scored six first-half goals against DuBois and has 28 this season. Reece Johnson also scored on Saturday and has 15 goals, while Sam Louie has 14. Dominic Padalino leads Prep with 23 assists followed by Foht with 13 and Daniel Harrington with 10.

Mars will counter with solid defense that includes plenty of senior leadership — and a balanced scoring attack which turned things up a notch when trailing Franklin Regional early in the second half in the final.

Knauff won back-to-back WPIAL titles in 2007 and 2008 and the furthest the program advanced in the PIAA’s was to the final in 2007, where they lost to Palmyra, 2-0.  With a win on Tuesday, the Fighting Planets will return to the final for the first time since 2008.

The winner plays the winner of Northern/Upper Moreland on Friday, at HersheyPark Stadium at 6:30 p.m.

Deer Lakes can continue its impressive season and run, but they’ll have to do so against a team that hasn’t lost this season. On Saturday, the Lancers dominated Karns City in every aspect of its match, but they struggled to convert on numerous scoring chances until the second half.

Still, after a week between games, Deer Lakes possibly needed a full-80 minutes to get its act together. They’ll need to play better as the tournament continues Tuesday night.

“It’s been awesome around here after the WPIAL championship game, but we knew we weren’t done,” said Rodgers. “We want to go to states, and we’ve got a different mindset this time.” Deer Lakes, winner of 12 straight and producer of three clean sheets in five postseason outings, will take on District 10 champion Fairview.

Fairview rolled to a 3-1 win over Westmont Hilltop in the quarterfinals after a long trip to Johnstown. Aiden Piazza leads Fairview with 21 goals, while Zach Scott has 17 and Nathan George has 16. Josh Howells leads the Tigers with 15 assists and Drew Smith has 13.

This is Fairview’s first time back in the PIAA semifinals since 1992 when the Tigers fell to Quaker Valley 2-1.

The winner plays the Oley Valley-Lewisburg winner on Saturday at 1:30 p.m. at Hersheypark Stadium for the PIAA Class 2A championship.

The Centurions have a chance to reach their first-ever PIAA final with a win on Tuesday.

For all of its success in WPIAL playoffs, GCC has never won a PIAA title, but have reached the state semifinals the last two seasons, each time losing to WPIAL rival (last year it was Winchester Thurston and in 2018, it was Avonworth). This time around, they won’t have to face WPIAL opposition, as Brockway, the District 9 champions, stand in their way.

GCC won a hard-fought, physical quarterfinal match, 3-2, against Rockwood, as Carlos Denis’ late second half goal was the difference.

It was Denis’ 33rd goal of the season.  Tyler Solis’ squad are certainly battle-tested now that they’ve won back-to-back 3-2 wins if you count the WPIAL title win against section foes Winchester Thurston on Saturday, November 7.

Brockway, with a brace from Nolan Swanson plus goals from Dom Inzana and Dylan Antonuccio ended Belleville Mennonite’s season in the quarterfinals with an impressive 4-0 win.

The winner goes to the state final set for 1:30 p.m. Friday at Hersheypark Stadium.