For the first time in program history, the University of Pittsburgh men’s soccer team will play in the ACC Championship Final after a 3-1 victory Wednesday evening over Notre Dame in the semifinal round at Dail Soccer Field/Track Complex.

Sophomore Veljko Petkovic got Pitt on the board first with a goal in the 21st minute, taking a free-kick into the upper right 90 from 23 yards out. Pitt has scored the first goal in every contest in 2020. Notre Dame (5-4) had a chance to tie it shortly after the goal, heading a ball directly on goal off a free-kick. Campuzano made a diving save and deflected the ball over the cross bar, forcing a corner kick.

Noel added to Pitt’s lead in the 34th minute, taking a pass from sophomore Raphaël Crivello and using his left foot inside the six-yard box for the score. Noel, who recently set a record for consecutive games played with at least one goal at four against Duke, is now tied for first in the country in total goals with seven.

Ten minutes later, Petkovic netted his second goal of the game – his second multi-goal game of his career – and gave the Panthers a 3-0 lead late in the first half. Graduate student Jasper Löeffelsend tallied his sixth assist of the season on Petkovic’s second goal and is now in sole possession of first-place in total assists in the country.

Notre Dame had another opportunity to put a goal on the board, as the ball trickled into the box off a shot deflection. The Irish had an open net, but senior Jackson Walti used his body to stop the shot and keep the shutout intact.

Pitt outshot Notre Dame 8-6 in the first half and registered four saves to the Irish’s one.

Notre Dame put pressure on Pitt’s back line early in the second half, totaling five shots in the first six minutes of play. The Irish got on the board late, as Jack Lynn converted a penalty kick in the 87th minute to cut the lead 3-1. Pitt kept Notre Dame at bay the rest of the way, securing the victory and clinching a spot in the ACC Championship Final for the first time in program history.

The Irish finished the contest with 18 shots compared to Pitt’s 13. Notre Dame tallied 10 corner kicks, while the Panthers had zero for the night.

The No. 1 Panthers face Clemson in the ACC Final Sunday, Nov. 22 at 12 PM at WakeMed Park in Cary, N.C. The game will be broadcast on ESPNU.

–          The Panthers are now 4-1-1 in the past three seasons in ACC Tournament play. Head Coach Jay Vidovich improved his Pitt ACC postseason record to 4-3-1.

–          Sophomore Valentin Noel continued his scoring streak, netting his seventh goal of the season in the 34th minute. Noel has now scored in each of his past five games. 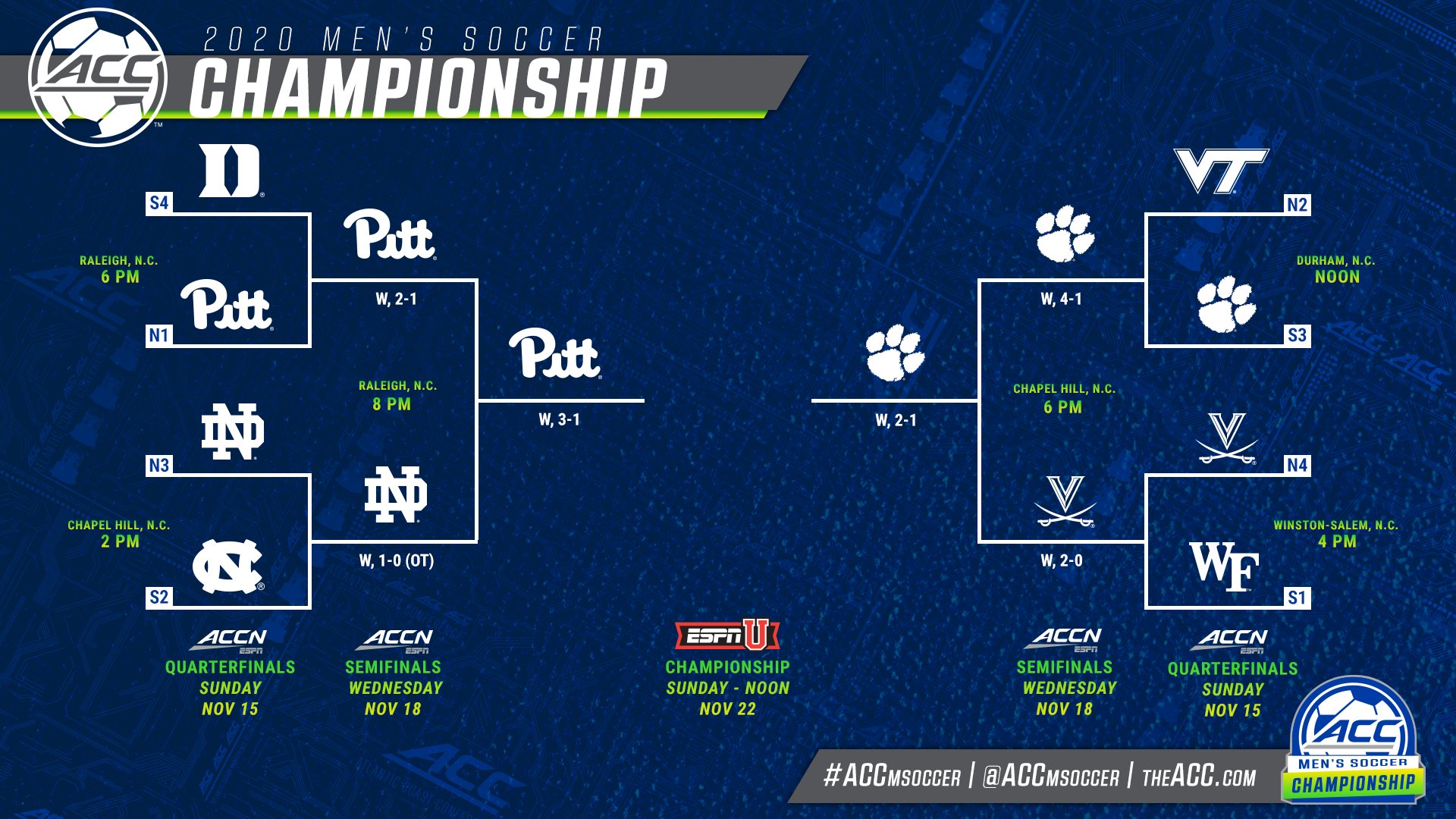 Jack Lynn converts a PK for the Irish to spoil Pitt’s shutout bid.

76′ – Nico Campuzano with sixth save of the game!  THis one from a ND free kick after Petkovic foul.

73′ – Pitt going with another bench player, Luis Lara in now.

71′ – Anas Amrani and Matt Bailey also in the line-up for Pitt now.

63′ – Jasper Loffellsend down with an injury after getting clipped. Luke Mort comes in for him.

60′ | Notre Dame has six shots in the second half.

52′ – early stages of second half — as you might expect Notre Dame pushing really hard for goal, have already earned three corners this half but Pitt doing decent job of defending.

Campuzano with two HUGE saves early in the second half again. Could be a different game.

This one could very well be 3-2.   Total shots are 8-6 in favor of Pitt and shots on target are even at 4-4. Couple great saves from the Panthers keeper Campuzano.

Petkovic gets credit for it — with hard shot deflects off ND defender and into goal. 3-0 Panthers 44′

We will say it again.

Raphael Crivello with a low cross to near post and Valentin Noel was there to one-time it in.

They can beat you so many different ways.

26′ — The Irish have had their chances. After a few set pieces — Pitt GK Nico Campuzano comes up big!

Campuzano with an incredible save to keep up 1-0.

20′ – ND with a number of set pieces — including a corner that nearly sees a redirected header goal, but Nico Campuzano with a big time save.

Petkovic's fourth goal of the season. 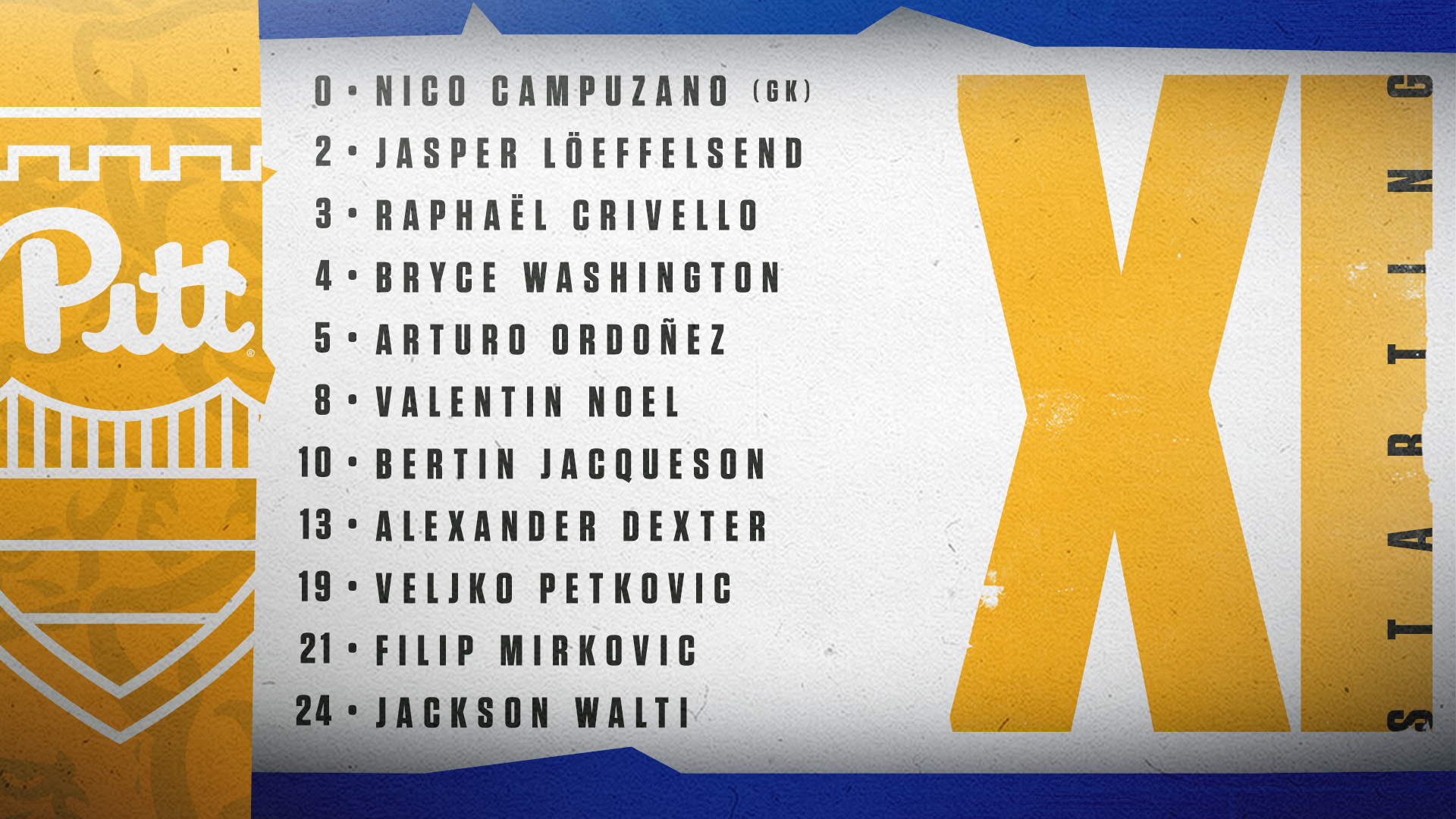 It wasn’t pretty, but Pitt got the job done in Sunday’s 2-1 win vs Duke.

Keep in mind, a few hours prior to the match, Pitt released a statement that a few players would still missing due to COVID protocols, as the Panthers were returning to the pitch after having the final two regular season games canceled.

This is the ACC — so no game will be easy — and that will be the case for Pitt as they face Notre Dame for the second time this year. Pitt opened its season with a 3-1 win at South Bend.

Pitt is playing through its talented midfield and getting into quick transition attacking mode, they can stretch and break down opponents in a moment’s notice.

They’re not reliant on any one player to pick up the scoring slack, as Valentin Noel, Alexander Dexter of Veljko Petkovic are key attacking threats.  Bertin Jacquesson, a talented freshman forward from France who started every match up until the ACC quarterfinal against Duke, did not play Sunday. If he’s able to play — that could only add another dangerous weapon for Pitt’s attack. In his place, Pitt started Luke Mort on Sunday. Pitt use Mort at the top of the formation, constantly pressing Duke’s back line. Mort, who is from Greensburg and played at Greensburg Central Catholic/Riverhounds Developmental Academy was effective in 69 minutes of action, along with Luke Peperak, another local product, from Connellsville, who came in the second half for 20 minutes.

The Irish will have a talented group who will test Pitt’s patience and be difficult to break down. Pitt will have to watch out for Jack Lynn and senior Aiden McFadden, who’s been solid during his senior campaign.

Pitt’s had an incredible run thus far this season, but they’ll have to be on top of their game to make it to the ACC Championship game for the first time ever.

The Panthers are playing in their second ACC semifinal game in program history and second in as many years. Pitt is 3-3-1 all-time in the ACC Tournament, all under head coach Jay Vidovich.

Vidovich and the Panthers are 3-1-1 in the past three seasons in the ACC Men’s Soccer Championship.