After a fairly quiet first half, Pitt stormed out of the gates in the second half and never looked back with a dominant performance in beating Notre Dame for the third time this season, 2-0, at Ambrose Urbanic Field on Saturday.

After holding a slight edge in shots (4-2, 1-0 on target) and corners (3-1) at the half, the Panthers brought wave after wave of pressure, forcing the Irish into numerous mistakes and defensive scrambles.

Ordonez capitalized on a second ball from Bryce Washington after Pitt’s first corner kick of the second half.

Ordoñez with his third goal of the year!

Pitt continued to own the possession edge, but did allow a few Notre Dame counter moments, finally conceding a shot on frame in the 74th minute on a free kick from 19 yards from Aiden McFadden.  Campuzano was there though for his lone save of the match.

Shortly after this, the Panthers made the stretched out Irish pay, as Veljko Petovic played a vertical ball, hitting Dexter in stride as he got behind the Notre Dame back line, then after taking a few touches, blasting a shot past goalkeeper Bryan Dowd.

That's the senior's fourth goal of the season!

The Panthers are now 12-2 overall, and 4-1 in ACC for the Spring season, putting them in the lead in the Coastal Division with one game left to play.

Pitt will return to action to wrap up the regular season, hosting Virginia on Thursday at Ambrose Urbanic Field.

That's the senior's fourth goal of the season!

Not sure what @Pitt_MSOC HC Jay Vidovich said at halftime, but the Panthers have been bringing relentless pressure for the entirety of this second half. Maybe their most impressive half of Spring season as they lead Notre Dame, 2-0 late. #ACCSoccer @ACCMSoccer

75′ – Pitt with a few deep advances, but can’t finish.  Notre Dame draws foul right on edge of box on right attacking side.  Free kick to the inside post area, but Campuzano is there to punch it away.

Two big saves over the last 10 minutes from Byran Dowd to keep us in this one. 17 minutes left to find a goal.#GoIrish☘️ pic.twitter.com/E17AEkpuq3

60′ – Pitt has really turned up the pressure and also playing more physical too, forcing the issue now.

Here’s a look at the Panthers’ goal.  Ordonez in the box, again.

Ordoñez with his third goal of the year!

Bryce Washington with the assist.

It’s been a tentative affair, with neither side giving much away.  Pitt thus far with the only shot on frame, coming from Alexander Dexter.

We are scoreless at the break. Jack Lynn had our best chance when he hit the woodwork from outside the box.#GoIrish☘️ pic.twitter.com/DrjJDst8qr

Look for lineups and gameday updates to be posted here.

We’re live at Ambrose with Ed Thompson getting pics tonight!

Still working but now with @pghsoccernow as @_MSOC and @NDMenSoccer square off here in Pittsburgh. @JohnKrysinsky will have the recap. Kickoff was 2:00 ago. pic.twitter.com/B5XHPpQVIS 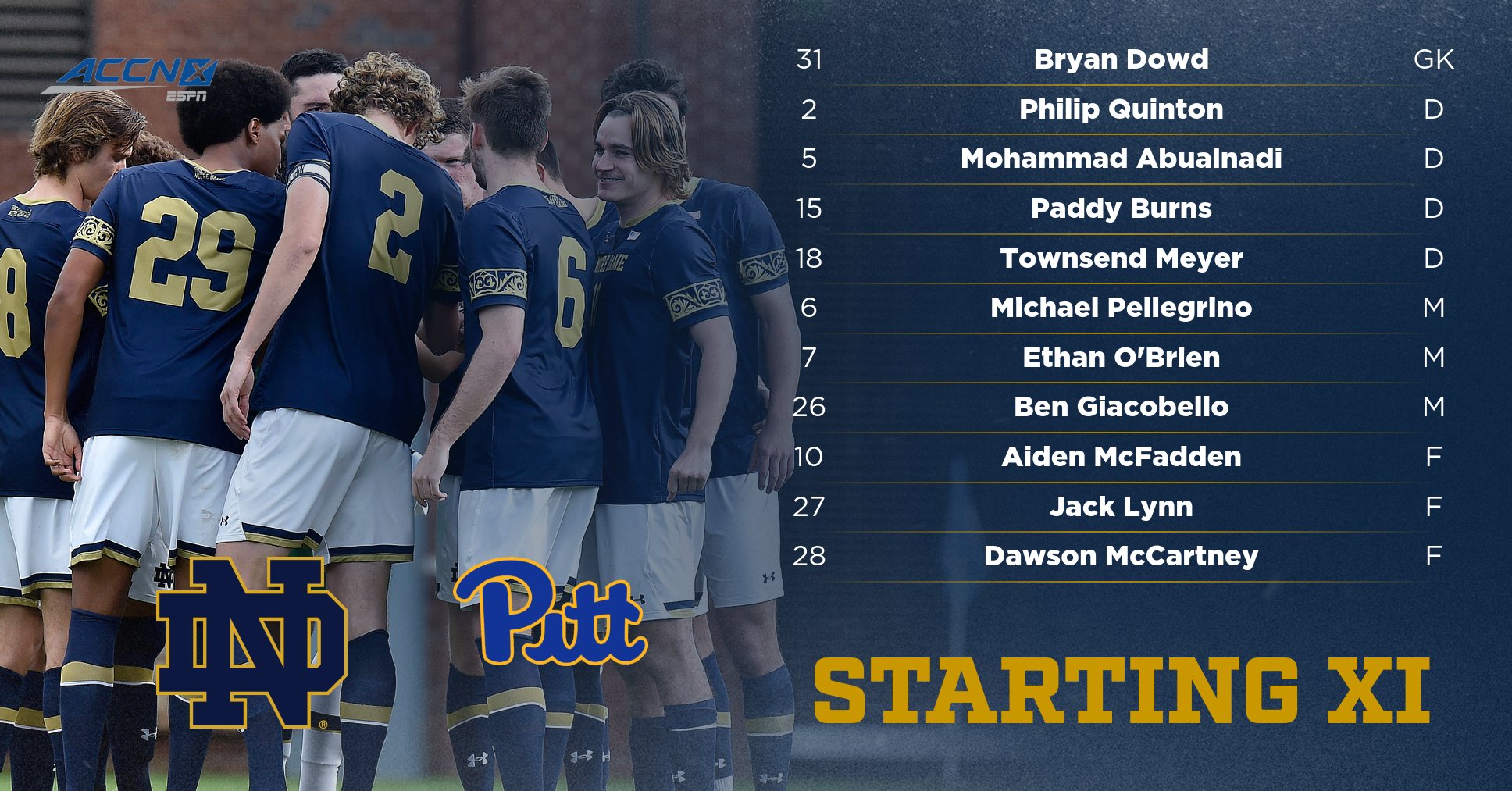 Coming off a two-game road stretch in which they pulled out consecutive overtime, golden-goal wins against Duke and Virginia Tech, the No. 3 University of Pittsburgh men’s soccer team returns home to Ambrose Urbanic Field and hosts ACC foe Notre Dame Saturday evening.

The Panthers (3-1, 9 pts) are on track to be a potential number high seed in the NCAA tournament but will need to keep winning to stay atop the ACC’s Coastal Division, slightly trailing North Carolina (3-1-1, 10 pts).  By closing out the season with two home victories, the Panthers should clinch the Division, putting them in position to play for the ACC’s automatic bid.

The Panthers have also moved up again in the National Rankings this week, to number three.

This will be the third meeting between Pitt and Notre Dame this season, as they met twice in the fall, with the Panthers winning each time by 3-1 scores.  The second meeting came in the ACC Tournament Semifinal.  Look for the return of Veljko Petkovic back to the lineup after the sophomore midfielder/forward had to sit out last week’s win vs Virginia Tech due to a red card in the previous match vs Duke.

Remarkably, this will only be Pitt’s fourth home match this entire season encompassing the fall and spring, as they only played once in the fall at Ambrose Urbanic Field (a 4-2 win vs Virginia Tech), along with victories over Duquesne and Boston College.

After Pitt’s win vs Notre Dame in November, Mark Goodman joined me for our postgame thoughts.

–        The Saturday evening affair will be the third meeting between the Panthers and Fighting Irish this season. Pitt won the first meeting, 3-1, Sept. 26, 2020 and won the second affair by the same score in the ACC Championship Semifinal Nov. 18, 2020.

–        Jack Lynn, one of the nation’s leading goal scorers, comes in with eight goals to his name, ranking second in the ACC and fourth in the nation. Lynn’s points per game (1.14) ranks sixth in the league, while his 16 total points is third in the ACC.

–        Goalkeeper Keegan McLaughlin has tallied 32 saves this year, fifth in the ACC. His 2.46 saves per game is eighth in the conference.

–        The Niort, France, native scored his first two goals of the spring campaign Mar. 19 at Duke in Pitt’s 2OT thrilling victory over the Blue Devils. He followed that up with a goal at Virginia Tech Mar. 27, giving Pitt a 1-0 lead at halftime in Pitt’s eventual 2-1 2OT victory over the Hokies.

–        Pitt enters the Notre Dame match with the number one scoring offense in the conference with a 2.38 goals per game mark, a number also good for 15th in the nation.

–        The Panthers have totaled 31 goals this season, which leads the nation. Pitt also leads the country in total points (92) and is second in total assists (30).

–        The Panthers have had nine different goal scorers this season and have had 11 different players assist a goal this year.

JASPER SENDS IT IN

–        Graduate student Jasper Löeffelsend has emerged as one of the best passers in the country, finding his teammates on seven different occasions this season for goals.

–        The Cologne, Germany, native’s seven assists are tied for first in the ACC and third in the nation.

–        Löeffelsend recorded an assist vs. Boston College Mar. 13 in the lone goal of the 1-0 shutout for his first of the spring campaign.

–        Junior Jackson Walti was named ACC Defensive Player of the Week Monday, Mar. 29 for his efforts in Pitt’s 2-1 2 OT victory at Virginia Tech.

–        Walti played the entire 103 minutes, aiding a back line of defense that held the Hokies to one shot in both overtimes and three corner kicks all game.

–        The weekly honor was the first of his career and sixth this season by a Panther.