It was a cruel result that ended a remarkable season for the Pitt Panthers, losing to the resilient and opportunistic Indiana Hoosiers, 1-0 on Friday night in the NCAA College Cup Semifinal at WakeMed Park in Cary, North Carolina.
Despite controlling much of the match, holding the edge in possession and shots (14-7, 2-2 on target), the Panthers were victimized by the game’s lone goal, late in the second half, on a brilliant strike from Herbert Endeley.
The Hoosiers will move on to face the Marshall Thundering Herd on Monday night in the College Cup final.
We’ll have more detailed breakdown of the match and  look back at Pitt’s remarkable season in the days to come.

Cruel result for the Panthers, who controlled much of the match, but the Hoosiers show their resiliency and opportunistic play again to reach the final.
The Hoosiers will move on to face the Marshall Thundering Herd on Monday night in the College Cup final.

87  — Jacquesson back on for Pitt. They could use his dynamic play on the width.

85′ — IU will be putting as many men behind the ball in the last six minutes as possible. They’ve been terrific in managing games when they’re under pressure all tournament. Only have allowed 5 goals all season.

84′ — Pitt with most of the possession here, but IU have numbers behind ball.

Not a stat Pitt faithful want to see, but when they score first they’re 16-0, when they give up the first goal, they’re 0-3

73′ — Pitt’s been very patient in build up. Another corner (5th of match) as Walti makes move into box. In swinging corner looks dangerous — Crivello header flys wide left of the post!

Mort and Bailey in
Jacquesson and Dexter out

66′ — Cross in for Noel — sets up another corner for Pitt. Ensuing corner — quick short 1-2 between Petkovic and Jacquesson. Petkovic left footed in-swinging ball in middle of goal box but nice job by IU’s Roman Celentano to secure ball.

Mirkovic looking to capitalize but JUST hitting one off the crossbar.#CollegeCup pic.twitter.com/rx7NIR8S2t

58′ — Mirkovic… Off the bar down to line and out!!! here’s comes instant replay!! But it shows didn’t cross line.

56′ — Bezarra with a couple shot attempts in transition — the latest coming in a 1v1 situation, then bends ball toward far post that just misses.

48′ — IU gets forward in transition — Bezarra shot — low and pretty routine save for Campuzano.

“Thought we managed them well. Press middle of half. Have to take care of ball in transition.  Need to be better in those moments. Kept it tight. Overall in good place. Have to do more offensively.  Those transition moments, keep it in front half a little more.  Second balls in box. We can create problems. More service.  We’ll have to keep it lock tight in the back.”

44′ — Great save by IU’s Celantano!!! Petkovic in for Noel — header was on frame but Pitt’s leading scorer was robbed.

42′ — it’s a Balkans connection… Great ball through from Mirkovic to Petkovic, who splits IU’s center backs, but shot sails over bar.

A VERY close call for Indiana 😯

16′ — Indiana’s been selective about bringing high press against Pitt. They just tried to do it, and Arturo Ordonez did some nifty work to evade a defender and push ball forward to wing to Dexter, who got forward and drew foul.

7′ — Pitt dodges an early bullet! Loeffelsend has trouble with first touch on cross that comes in, but blocks shot. IU corner to near post is cleared away.

8:44 pm — they’ve kicked off, and it’s Pitt with the early build-up that leads to Veljko Petkovic shot on frame. Easy save for IU’s Roman Celentano

No changes!
It's going to be the same @Pitt_MSOC Starting XI
Here's how they typically line up. #CollegeCup #H2P pic.twitter.com/vpdc6RlwFH 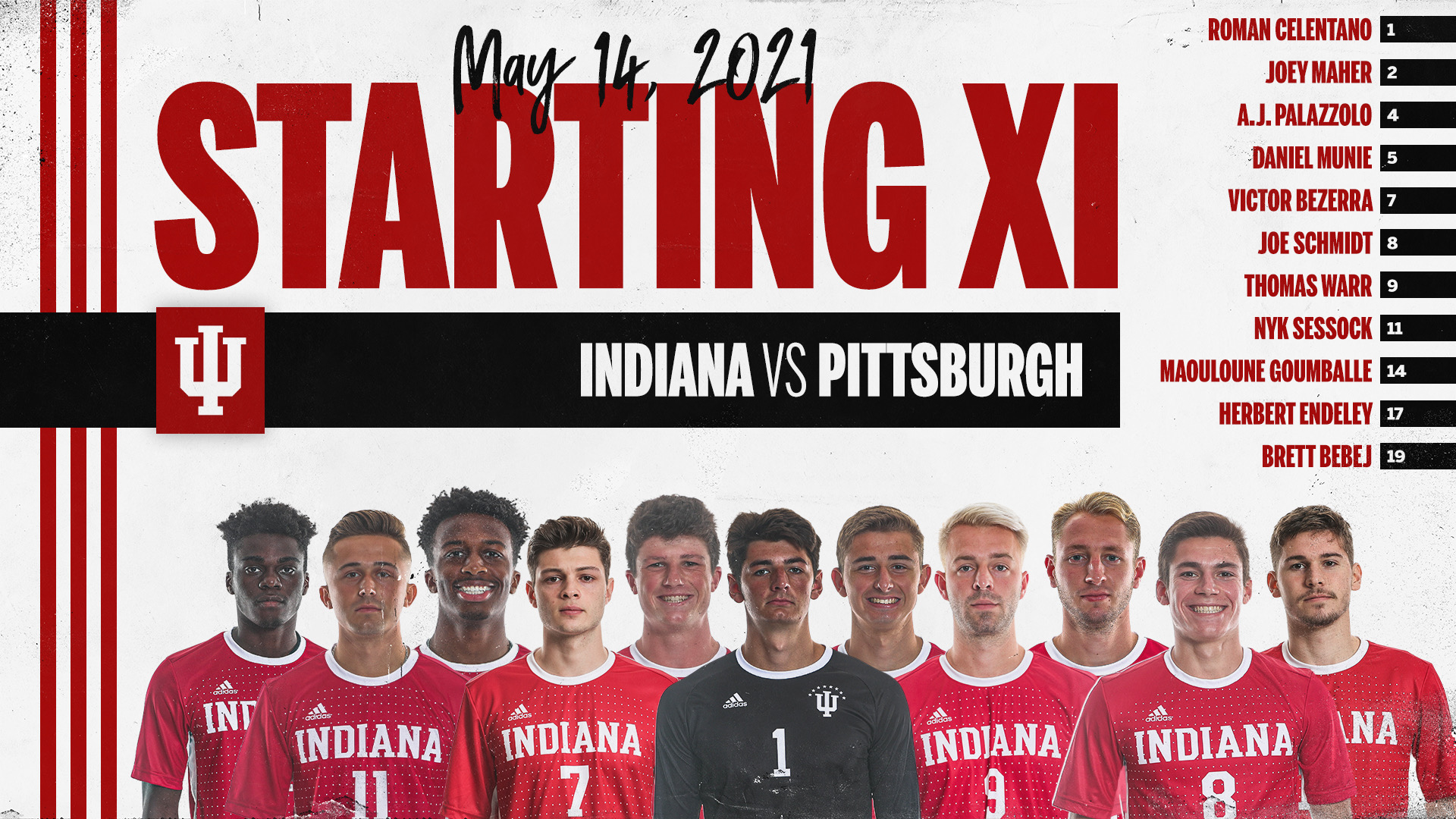 HAVE YOURSELF A CUP OF TEA 🤩

The countdown is on ⏲️ The NCAA Men’s Semifinal between No. 2 Pitt and No. 3 Indiana will be the second game of the College Cup doubleheader on Friday night  Look for lineups to be posted here approximately 15 minutes before kickoff.

We’ll also have updates throughout the match along with the postgame recap and reaction here on Pittsburgh Soccer Now.

The first National Semifinal between Marshall and North Carolina will kickoff at 6 p.m.

Vidovich: “We’re very excited about where we are.”

–        Indiana won the lone contest of the series by score of 3-2 in double overtime in the Adidas/IU Credit Union Classic in Bloomington.

–        The Hoosiers enter the match with a stout defense that has limited its opposition to five goals this season. As a team, Indiana is third in the country in goal differential (25), first in save percentage (.909), second in team goals against average (.343) and fourth in shutout percentage (.643).

–        Sophomore Victor Bezerra leads the Indiana offense with 12 goals and four assists on the season. Bezerra was named a MAC Hermann Trophy Finalist, as well as an All-Region First Team recipient and a First Team All-American. Bezerra has one goal and one assist in the NCAA Tournament.

–        Sophomore Roman Celentano is 10th in the nation with 50 total saves. Celentano leads the country with a .909 save percentage and has limited the opposition to five goals on the year.

PITT ADVANCES TO COLLEGE CUP WITH 3-0 WIN OVER NO. 7 WASHINGTON

–        The Pitt Panthers advanced to their first NCAA College Cup with a 3-0 shutout victory over No. 7 seed Washington Monday, May 10.

–        Sophomore Valentin Noel scored the first goal in the 52nd minute – his 14th of the year – and freshman Bertin Jacquesson and sophomore Veljko Petkovic added goals with less than five minutes to play to clinch the victory.

–        Graduate student Jasper Löeffelsend had an assist, his second of the NCAA Tournament and nation leading ninth of the year.

–        The Panthers earned a plethora of awards this past week, including five All-Region honors and two All-American recipients.

–        The duo become the first Panthers in program history to be named All-Americans.

–        The five Panthers on All-Region is the most of any season in school history. Pitt had a total of seven players since 1983 earn an All-Region spot.

–        Sophomore Valentin Noel was recognized by the United Soccer Coaches and Missouri Athletic Club Wednesday as a finalist for college men’s soccer’s most prestigious award, the MAC Hermann Trophy.

–        The award is the most coveted individual honor in NCAA Division I men’s soccer and has been awarded annually since 1967.

–        Sophomore Veljko Petkovic was named TopDrawerSoccer Player of the Week for his performance against UCF and Washington.

–        Petkovic scored three goals for the week, including a goal 23 seconds in to the UCF match, a school record for fastest goal scored to start a match.