The No. 7 Pitt men’s soccer team fell in double-overtime on the road to Notre Dame, 1-0, Saturday evening at Alumni Stadium.

The result drops the Panthers to 4-2 in ACC, and gives Notre Dame (now 4-1-1) a leg up in the race for first place in the Coastal Division.

It was a tight match throughout, with Pitt pushing numerous times into the final third, but they couldn’t unlock the well-organized Notre Dame defense.  As Pitt continued to run into a wall, the Fighting Irish built momentum, and began to look more dangerous on the counter later into the match.

Ultimately, the match would be decided on a costly mistake by Pitt and a heads up play by Notre Dame.

Into the second overtime, the Fighting Irish got the break it needed when Pitt goalkeeper Nico Campuzano came way off his line, past the edge of the box to head away a ball that got behind Pitt’s center backs.  The ball was played to the vicinity of Notre Dame’s Dawson McCartney, who quickly took a one-time shot from 30 yards which bounced into goal left open.

The grad student with a wonder strike to win it and send the Irish to the top of the table in the ACC!#GoIrish☘️ | #SCTop10 pic.twitter.com/r3oFCuU2zh

Both teams combined for seven shots in the first half, with Pitt totaling four to Notre Dame’s three. Junior Mohammad Abualnadi, who transferred from Notre Dame after the 2021 spring season, saw the first shot of the night sail just high of the bar via header in the seventh minute.

In the 30th minute, Notre Dame (8-4-1, 4-1-1) had a chance inside the box as Jack Lynn gathered a loose rebound and attempted a shot on net. With his heels on the goal line, graduate student Jackson Walti headed the shot back toward the field of play as the Pitt defense forced the ball out of bounds for a Fighting Irish corner.\

Graduate student Nico Campuzano tallied two saves in the second half’s first six minutes after registering zero in the first half. The Fighting Irish kept the offensive pressure high on the Panther back line for most of the second half, outshooting Pitt 5-1.

Both teams were unable to break the 0-0 tie as the match headed to overtime.

The Fighting Irish outshot the Panthers 14-5 for the match and led in corners 4-1, with most of the Notre Dame pressure coming in the second half and in overtime. Pitt actually held a 4-3 edge in shots at the half.

Pitt’s keeper Nico Campuzano comes way off his line to head the ball away from danger — but ball comes back out to ND’s Dawson McCartney about 35 yards from goal — and sends it on to the open goal for the game-winner. Pitt is now 4-2 in ACC

95′ | Nico Campuzano with a big stop  for his third save of the evening. Panthers and the Irish scoreless with five minutes left to play in the first overtime.

90′ — END OF REGULATION — PITT 0, NOTRE DAME 0
79′ — Build-up for the Panthers through the middle third and in the width has been decent, but every cross, short through ball or shot attempt has been denied by Notre Dame.
Pitt’s been knocking on the door all night long. The Irish won’t let them in.

73′ — Abdulnadi with a clutch tackle in the box on a Notre Dame counter, denies shot chance for Jack Lynn who broke behind Pitt’s center backs.

65′ — Pitt’s had to absorb some Notre Dame pressure early in the 2nd half — and they’re still struggling to connect that last pass in the final third when they get forward. Credit to ND’s defenders for staying compact and behind ball. 0-0

Pitt with slight edge in shots (4-3, 1-0 on target) and they’ve had more possession, but the Irish are well-organized, and won’t be easy to crack.

Also of note, this is Pitt center back Mohammad Abdulnadi’s return to South Bend, as he played with the Fighting Irish for two years. First start for Lucas Matuzewzski — who finished out the Duke match in place of injured Arturo Ordonez. 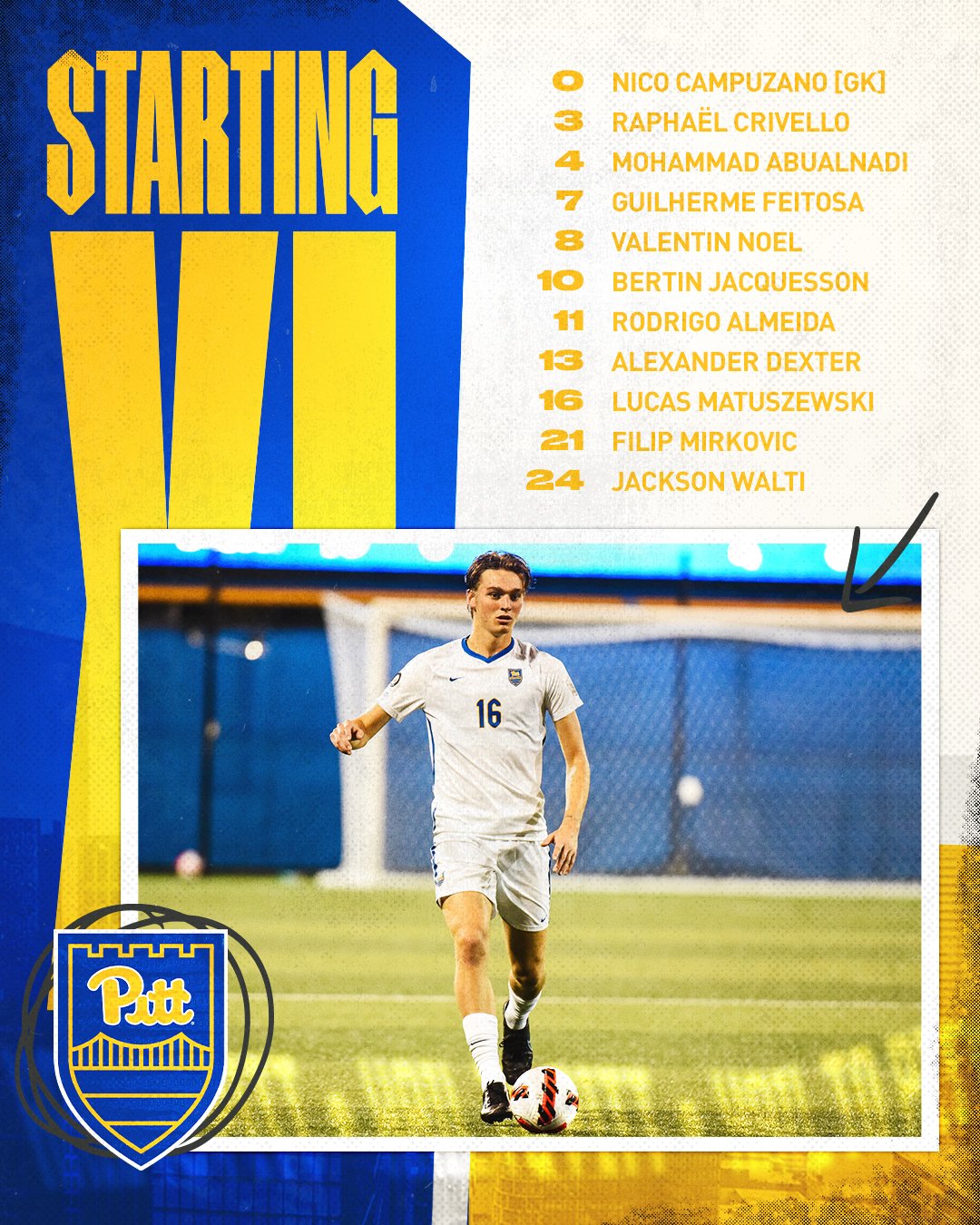 After an up-and-down start to the season, the Panthers have started to look more like the team that was favored to win the ACC and one that could return to the College Cup for the second straight season.

However, the Panthers are not immune to dealing with some challenges as they head into an important Coastal Division match at Notre Dame, who they’ve dominated in recent matches.

Pitt will be without All-American Graduate Student Jasper Loeffelsend, who will be serving a one-game suspension after being sent off after accumulating a pair of yellow cards in the Panthers’ 3-0 win vs Duke last Saturday.

In addition, one of the Panthers’ leading scorer this Fall, Veljko Petkovic sat out the Duke match, as he’s been nursing an injury.

The next man up approach has worked for the Panthers this season, with senior Rodrigo Almeida and freshman Guilherme Feitosa picking up the slack. Feitsosa was named ACC Co-Offensive Player of the Week, as he had all three assists in the last victory and a player that will be tough for Jay Vidovich to keep out of the lineup.

–        Saturday’s marks the 29th meeting between the Panthers and Fighting Irish. Notre Dame leads the all-time series 18-7-3, with Pitt winners of the last three.

–        Notre Dame is fourth in the nation – and tied first in the ACC – in scoring offense with 2.83 goals per game. It is also fifth in the country and first in the league with a 21 goal differential.

–        Both Pitt and Notre Dame enter as one of the best passing teams in the country, as Pitt is tied for first in total assists (36) while Notre Dame is fourth (34).

–        Matthew Roou has five goals and two assists for the year, while Daniel Russo – who was recently named ACC Co-Offensive Player of the Week – leads the team in assists with four.

PITT DEFEATS NO. 3 DUKE AT HOME

G WITH THE GOALS

–        Freshman Guilherme Feitosa has made a name for himself in the second half of the season, recording seven points in his last three matches.

–        He tallied a career-high three assists – his first assist as a Panther – in Pitt’s 3-2 victory over Duke. The three assists in one match is tied for second in a single-game at Pitt.

–        He was recently named ACC Co-Offensive Player of the Week Oct. 12 for his performance against Cleveland State and Duke.

PITT RANKED NO. 7 IN UPDATED POLL

–        The Panthers earned the ranking of No. 7 in the latest United Soccer Coaches Poll.

–        The Panthers have the highest RPI ranking among all ACC schools.

–        Pitt stays on the road for its final regular season away contest at Virginia Friday, Oct. 22.