Following a formula that worked in a regular season win, and for nearly 300 minutes of play heading into this match without surrendering a goal, the Notre Dame Fighting Irish ended Pitt’s 19-game home winning streak by scoring twice in a span of 14 seconds for 2-0 win at Ambrose Urbanic Field on Wednesday evening.

Notre Dame’s Jack Lynn and Daniel Russo each scored to stun the Panthers in less than a minute’s time.

TWO GOALS IN 12 SECONDS 🤯 @NDMenSoccer upsets No. 1 seed Pitt to advance to the ACC Championship! pic.twitter.com/nnjlGgKzsO

Pitt outshot Notre Dame, 17-10, but the Irish made their chances count, holding the 4-3 edge on shots on goal.

Pitt also controlled much of the first half, but the match swung in the second half, as Notre Dame continued to defend in its defensive third by blocking crosses, shots and clearing Pitt corners with regularity, then took advantage of its scoring chances by taking advantage of mistakes.

“We didn’t capitalize in the first half on numerous chances,” Pitt’s Head Coach Jay Vidovich. “The blood was in the water, but we didn’t push for it. They got their two goals against the run of play, off mistakes. Congratulations to Notre Dame.”

The Panthers held a whopping 17-3 edge on corner kicks, but failed to convert on their set piece opportunities.

Notre Dame will now await the winner of Clemson-Duke for a meeting in the ACC Championship game on Sunday.

With the loss, Pitt ended its 19-game win streak at home.  The Panthers will now await Monday’s NCAA tournament bracket selections to find out what their seeding and match-ups will be for the first and/or second round.

“We gave them some chances. We bent but we didn’t break,” Notre Dame Head Coach Chad Riley said. “In the second half, we started to get better defensive pressure on the ball that led to transition moments. It’s a game away from home, against one of the best teams in the country, you have to get comfortable not having the ball for a while.  We always want to be a team that gets stronger as the match goes on, and tonight was another example of that.”

We’ll be posting game updates here around kickoff and throughout the match along with post match reaction.

Here are the goals…

Pitt wanted offside call — but Panthers giveaway leads to another ND counter — as Russo broke behind Pitt back line after nice long thru ball from Jack Lynn.

62′ | Pitt keeps bringing pressure from the width. Now up to 13 corner kicks but Irish are defending them well — blocking bunch of crosses and a few shots too.

38′ | Irish on another counter, first time a shot on frame! it’s Russo with a hard lining shot but Campuzano with a stellar save.

36′ | Former Norwin standout Anthony Harding is in the match now, as well as Luis Sahmkow for Pitt. They’ve replaced Feitosa and Dexter.

33′ | Another short Dexter cross, just misses, this time it was Jacquesson making a break for it by far post.

29′ | The Irish continue to press high, forcing Pitt to play it out under pressure. Few times, Panthers have moved quickly into final third with shot chances. Latest coming from Loeffelsend, but shot goes wide left.

26′ | Pitt gets caught on counter — ND’s Jack Lynn gets forward on thru ball, but center back Arturo Ordonez with a terrific sliding save right in front of keeper Nico Campuzano who was coming off his line.

17′ | Five corners and five shots so far for the Panthers.

5′ | Nice quck advance by Pitt — Noel in space takes it to just inside box and drives shot barely missing it right. If Pitt has that kind of space getting forward, it will be a matter of time for a goal. 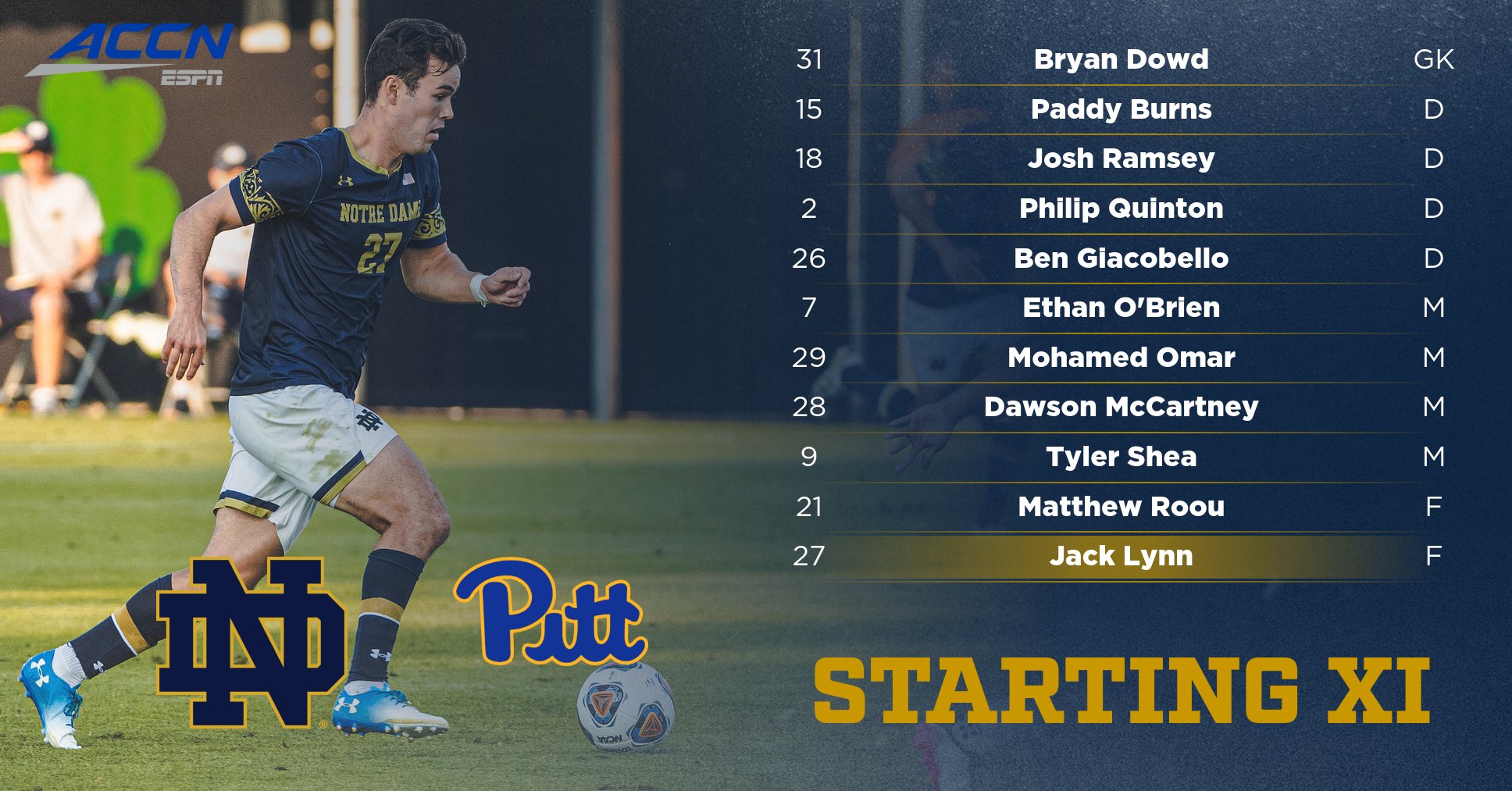 3:35 p.m. — Ahead of today’s match Pitt getting a number of honors as part of the ACC postseason awards….

PSN’s Ed Thompson will also be at Ambrose Urbanic Field to provide images.

The Pitt Panthers are riding an impressive 19-game home winning streak, but it was put to a stern test on Sunday in the Quarterfinal Round when Virginia Tech nearly executed an upset of the top-seeded team in the ACC Tournament with stingy defense, solid goalkeeping from former Riverhounds Development Academy and Philadelphia Union II standout Ben Martino and a counter-attack that had to keep Pitt honest.

Notre Dame, who stunned the Panthers in South Bend earlier this year in overtime, will try to follow the same formula. The Irish and the Panthers played an even match through 60 minutes the first time around, but Notre Dame were stronger in the late stages as they found opportunities to hit Pitt on the counter, eventually finding the game winner in extra time from Valentin Noel.

Remarkably, Notre Dame has played six matches this season that have gone to extra time, while Pitt has gone to extra time three times.  The Irish and Louisville went the distance on Sunday, playing a scoreless affair in regulations and extra time, with the Irish winning the match in a penalty kick shootout.

Speaking of Valentin Noel, here’s a feature on the talented Pitt junior, who may not be scoring goals at the same rate this season, but has still been an extremely valuable part of the Panthers’ success this Fall.

PITT RANKED NO. 5 IN UPDATED POLL