The Riverhounds SC couldn’t find the back of the net, despite getting a fair amount of shot opportunities, as they played to a scoreless draw against Old Guard Shield rival Charleston Battery on Wednesday night at Highmark Stadium.

With the result, the Hounds (14-7-6, 48 points) concede the season series to their rivals, who sit in 12th place. More importantly, Pittsburgh was unable to pick up any significant ground in the standings, remaining in fifth place, two points behind Birmingham Legion FC.

On what the team needs to work on: “Look, we’ve been inconsistent all year.”
/3 pic.twitter.com/VaC4IqgJFn

Pittsburgh held a 16-3 advantage in shots (but just 3-2 in shots on frame), as Charleston controlled possession, but the Hounds often moved into the edge of the box to generate shots, but not enough quality attempts on the night.

“I think we played the first half well. We could have done more to create chances and get around the edges more.”#PITvCHS #Houndtahn @pghsoccernow

Thanks in large part to center back Arturo Ordonez and goalkeeper Jahmali Waite, the Hounds kept a clean sheet, as both made dynamic second half saves.  It was Waite’s only save on the night, as the Hounds defended well throughout the match.

The Battery had more of the ball in the match with 58.6 percent of possession, but the Hounds kept most of the action in the Charleston end, outshooting their opponents 16-3.

Angelo Kelly nearly scored against his former team in just the fourth minute, as the Hounds midfielder pounced on a deflected cross but couldn’t tuck his shot from an angle inside the near post. Toby Sims put the game’s first shot on goal in the 19th minute, forcing a diving save and a rebound that was barely too far for a lunging Kelly to turn back on goal.

The Battery had their best chance of the game late in the half after a collision between Waite and defender Luke Biasi left the Hounds’ goal open, but Arturo Ordóñez hustled back to the goal line to head the ball over the bar and avert the danger.

The Hounds began the half with Dane Kelly winning a pair of free kicks in good shooting positions, but a curling effort by Alex Dixon rose over the bar, and a shot by Kenardo Forbes went straight to the gut of Kuzemka.

In the 83rd minute, Albert Dikwa forced a turnover from the Battery back line and sent the team in a 3-on-3 transition, but Charleston recovered well and forced Dixon to shoot from distance.

Waite’s lone save came at the 90-minute mark, as he backpedaled to tip a glancing header by Battery leading scorer Augustine Williams over the crossbar.

Danny Griffin, as often is the case in midfield battles, was the man all over the field for the Hounds. He led the team with 56 touches, completed 28 of 36 passes (including 8 of 9 in the final third), intercepted seven passes and won all three of his tackles.

The Hounds head back on the road to begin the new month, as they face Loudoun United FC at 7:30 p.m. on Sunday, Sept. 4 at Segra Field in Leesburg, Va. The Hounds won 2-0 in the first meeting this year with Loudoun (7-16-3), but the hosts come in on a high note after knocking off second-place Memphis, 1-0, on the road tonight.

Ideal result for @bhmlegion, which now holds a two-point lead for fourth place on #HOUNDTAHN with seven games to go for both. They square off on Sept. 14, should be a huge game for homefield advantage. https://t.co/dU9lxQNyR3

90′ – Waite with a big save to tip the header by Williams over the bar! Keeps things deadlocked.

84′ – Final Charleston substitution. Geobel Perez is in, Enock Kwakwa is the man who leaves.

83′ – Great anticipation by Dikwa to pick off a pass by the Battery defense. He pulls up instead of driving toward goal and feeds Dixon, who gets space but shoots just high.

80′ – That will be the end of the night for Angelo, and Dani Rovira enters the game as the final Hounds substitute.

71′ – Mertz takes a free kick near the sideline, and Wiedt’s up to win it again. That was tougher than his first-half chance, and it goes wide.

69′ – Great read on the play by Jelani Peters to jump into the attack. He wins the ball, carries it forward and gets off a firm shot, but Kuzemka makes the catch in the Battery goal.

65′ – Hounds change No. 4. Robbie Mertz enters the game, replacing Toby Sims, who was limping a little after putting in a good shift on the right flank.

59′ – Third Hounds change of the match. Albert Dikwa, fresh off his Team of the Week honor, checks in to replace Dane Kelly.

46′ – We’re back in action here, also with one Charleston substitution to report. Patrick Hogan is on the field for the Battery, trying to see who the player off is.

Hounds are conceding possession (Charleston with 62% of the ball). Pittsburgh have 7 shots but just one on frame.

45+1′ – Wiedt rises and wins a free kick cleanly, but his header curls just around the far post. Best chance yet by either side.

42′ – Dane Kelly controls the long ball into the box and gets a hard shot away, but Kilwien gets a boot in to redirect it behind for a corner.

39′ – Great save, by header of the goal line by Arturo Ordoñez.

23′ – YELLOW CARD – Marc Ybarra gets cautioned after a sliding challenge on Dominic Oduro. His face showed disbelief there was even a foul called, but he picks up the game’s first yellow.

4′ – A deflected cross falls to Angelo Kelly in the box, and he rips a shot from a sharp angle that just misses wide of the post. Almost got his first Hounds goal against his former team… 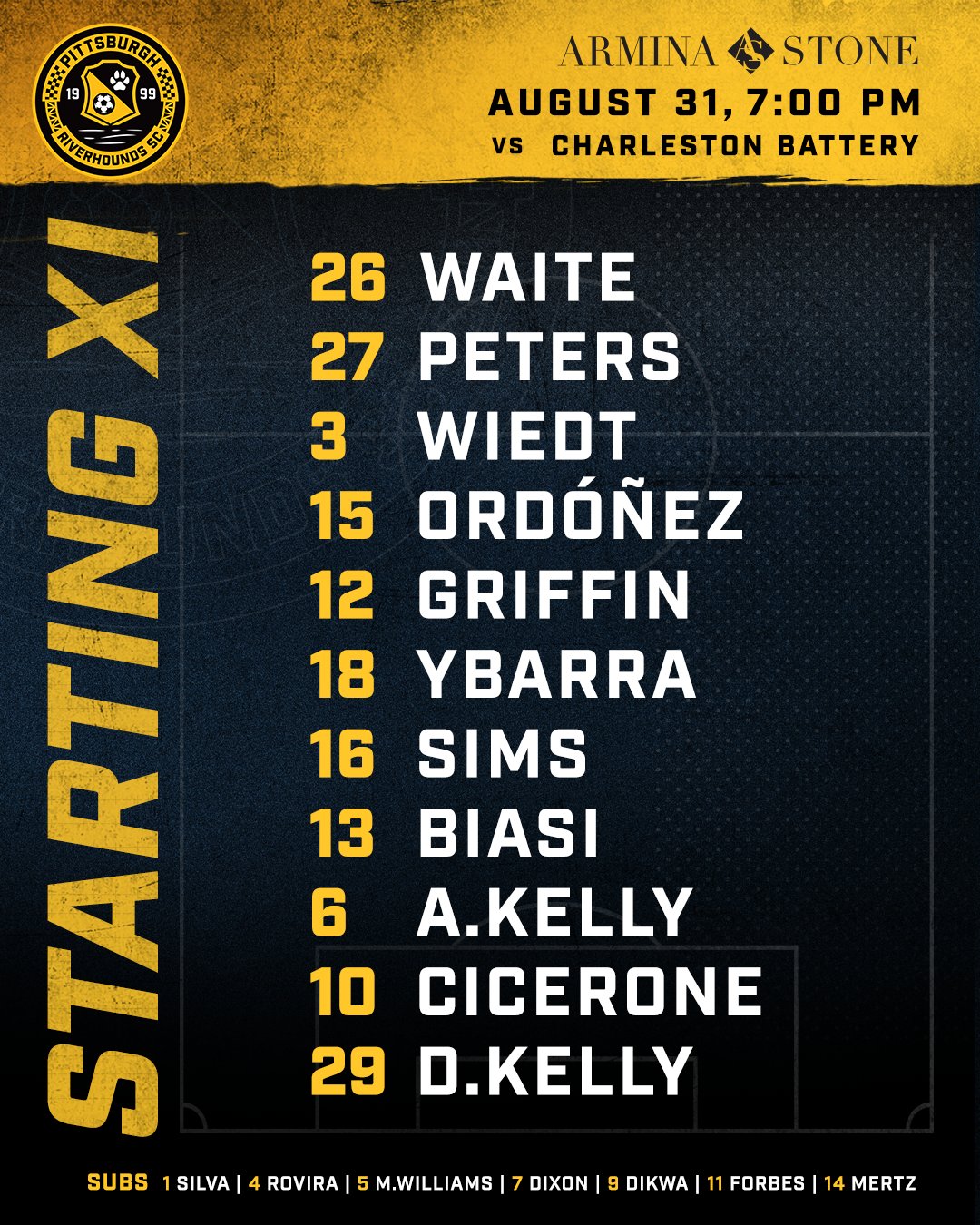 The boys are home versus Charleston at 7.

The Old Guard Shield is on the line and we're hoping Lilley told everyone to pack their shit kicking boots. We need a 3-0 final or to win by 4 to keep the Shield at @BulldogPGH.

August comes to a close with a renewal of the USL Championship’s oldest active rivalry, as the Hounds will host the Charleston Battery tonight at Highmark Stadium.

The game provides a chance for the Hounds to pull level in the Eastern Conference — both on points and games played — with fourth-place Birmingham Legion FC. It is also the third straight match for the Hounds against teams eliminated from the playoff hunt after a 2-2 draw with New York on Aug. 20 and a 2-1 win at Atlanta last Saturday.

The Hounds were beaten by the Battery in the year’s first meeting, 3-0 on June 11 in South Carolina, and they are 5-6-7 all-time in home games against Charleston.

In total, this will be the 39th meeting between the two teams since the Hounds’ 1999 inception, making the Battery the Hounds’ fourth-most-frequent opponent — only Rochester (46), Harrisburg (45) and Richmond (40) have battled the Hounds more often.

The in-form man for the Hounds is striker Albert Dikwa, who put in a top-grade shift as the No. 9 with both goals and 22 of 25 passes completed in the victory at Atlanta. But with this being the midweek game in a compact three-match stretch, the Hounds might choose to keep legs fresh, and they certainly are able to among the forwards after neither Dane Kelly nor Russell Cicerone played over the weekend.

One player who has never been subject to squad rotation is midfielder Danny Griffin, who hit a minor milestone in Atlanta with his 75th consecutive league match since beginning his pro career with the Hounds. The last Hounds player to play every match in three consecutive seasons was defender Nathan Salsi from 2006-09 (the team did not play in the 2007 season), but those were all 20-game seasons as opposed to the 34-game slate Griffin is navigating in Year 3 with the team.

For Charleston, there’s no question the man to watch is Augustine Williams. The Sierra Leonean striker is fifth in the USL Championship scoring race with 13 goals, including a second-minute opening goal in the first meeting with the Hounds this season.

It will also be a return to Highmark Stadium for defender Preston Kilwien, who played last season for the Hounds, and Battery coach Conor Casey will also have some fitness-based lineup decisions with his team also on short rest — Charleston fell 3-0 at home against Detroit on Saturday.

• For this second time this season and 39th time overall since these two teams first met in 1999, the Hounds and Battery face off as the oldest active rivalry in the USL Championship.
• The Battery have the edge in the all-time series and won this year’s first meeting in South Carolina, 3-0 on June 11, but the meetings in Pittsburgh have been fairly even. The Hounds are  5-6-7 at home in their history against Charleston.
• Forward Albert Dikwa powered the Hounds to a win last Saturday with both goals in a 2-1 road victory at Atlanta. It was  the second two-goal game of the season for Dikwa, and the 24-year-old striker has a career-high nine goals this year. The performance also earned his second USL Team of the Week honor for 2022.
• For the second year in a row, forward Russell Cicerone has hit his stride in the summer months. In 16 games since May 14,  Cicerone has nine goals and four assists. He leads the Hounds with 11 goals on the season — good for 10th in the league —  and he is just the third player in team history with consecutive double-digit goal seasons.
• Midfielder Danny Griffin has played all but 17 minutes since the beginning of the 2021 regular season, starting every league match during that time. He has not missed a league game since turning pro with the Hounds in 2020, appearing in 75 consecutive USL Championship contests.
• Defender Mekeil Williams scored his first goal with the Hounds and first in the league since 2019 with a headed finish from a corner kick against New York on Aug. 20. The Trinidadian international also played his 100th USL Championship match earlier this month against Memphis.
• Hounds captain Kenardo Forbes continues to hit playmaking milestones. The midfield veteran recorded his 40th assist with
the Hounds — pushing his USL Championship record total to 54 — with his service on Williams’ goal against New York. With
nine assists on the season, he is second in the league and on the verge of his first double-digit assist season.
• The Aug. 6 game against Indy was the 150th game for head coach Bob Lilley in all competitions with the Riverhounds. The
club’s all-time wins leader is 81-33-39 overall as he continueshis fifth season in charge.
• In 153 matches under Lilley in all competitions, the Houndshave allowed just 144 goals, an average of 0.94 goals per game.