Preview: Moon-Mars prepare for another ‘fight’ with berth in PIAA final at stake When the Moon Tigers and Mars Planets girls soccer teams came off the Highmark Stadium pitch following their much anticipated Class 3A Girls Soccer WPIAL Championship match on November 5, the prevailing sentiment was that it won’t be the last time the two teams would see each other this season.

Sure enough, they’ll have a rematch now on Wednesday night (originally scheduled Tuesday but weather pushed back all of the PIAA semifinals), this time at North Allegheny (6:30 p.m. kickoff) with a berth in the PIAA (State) Girls 3A Championship game on the line.

The Tigers held off the Planets the first time around, 1-0, as a first half goal from Tessa Romah held up.

In the process of winning its second consecutive WPIAL title, Moon also ended Mars’ impressive winning streak of 80 games, with a 78-0-2 record duing a four-year span.

Moon didn’t have too shabby of a record either heading into that showdown as they entered the game perfect on the season.  Moon was 91-2-1 during the same four year span that Mars ran its streak.

Following the match Moon’s Head Coach Bill Pfeiffer, was asked by one of the reporters in his postgame interview about the streak, he quipped with a smirk and a hint of polite arrogance.

Pfeiffer also stated at the beginning of the interview, that his squad were the underdogs coming into that match, all while also pointing out that his team had a pretty impressive record of their own over the past few seasons.

Considering Moon had most of their key starters back from an impressive WPIAL and PIAA Class 4A Championship season in 2021, they were hardly an underdog when facing Mars.

If that’s what Moon used to be motivated when playing Mars, by considering themselves as the underdogs, then so be it.

“You know, sometimes you have to step up. We’ve played 15 more games than them during the last four years,” Pfeiffer boasted and took another shot at the team his squad just beat.

So, let me get this straight.

Moon, which won both the WPIAL and PIAA at the highest classification (4A) in 2021, due to realignment, stepped down to Class 3A for the current two-year cycle.

This was a bit of a head scratcher to many, as they could have easily remained at the top level and probably had as good of a chance to win again. Meanwhile, there have been other schools, namely Peters Township boys, during this realignment cycle, who had the option to drop down to Class 3A, but in pursuit of staying in the highest classification and playing against best possible competition, remained in their familiar spot in the same section with many of their traditional rivals in Class 4A.

The only explaination that would make sense for Moon girls to justify moving down to Class 3A, after ruling the top classification, then, would have been to take on a new challenge of dethroning Mars from the Class 3A mantle.

Pfeiffer completely sidestepped that notion that they were soley motivated by the desire to move down to Class 3A just to take on and defeat Mars.

“I was thinking of it on the bus, and some girls have been dreaming of this moment and ready for this moment. We’ve been preparing for this game all season. To come out victorious is amazing. It really shows how hard we work.”

Whether or not they moved down to 3A just to face and knock off Mars didn’t take away from the fact that Pfeiffer’s Tigers were ready for the thrill of the fight against Mars.

“They fed off of that. They were prepared. They were focused,” Pfeiffer said.

“It wasn’t just another game.”

And now, the Planets and the Moon will clash again, as both sides have taken care of business in the State playoffs, and are looking forward to a showdown that will decide who gets to move on with a chance to win another PIAA title.

For Mars they could pull off a remarkable fourth straight title. It would be a chance for Moon to repeat winning back-to-back titles again, as they did in 2016 and 2017.

Those making their way out to North Allegheny should be in for another treat, as this will be no doubt, another instense fight on Tuesday night.

Before we look at the upcoming match, here’s a closer look back at the first confrontation.

With the level of talent on both sides, it became interesting to see in the WPIAL Final if both sides would feel each other out and be more methodical or open things up and not hold anything back.

One tough blow for Mars came right before the final, when 2021 All-State selection, Gwen Howell had to sit out due to an injury.  Howell, a senior, has been key contributor during the impressive streak. Most notably, Howell’s presence on the back line and getting on the end of Piper Coffield’s set pieces was sorely missed against Moon.

“It’s a big deal to put players in uncomfortable positions,” Blair Gerlach, Mars’ long-time coach, said when reflecting on how his team handled the change after that match.

“It changes the way you play a little bit. You take away a player who has one-v-one defending ability of Gwen, and take your leading scorer, and move her back to center-back.  She does a great job back there, but you take her out of the offense, so you have an idea of what the fight is going to look like.”

In addition to her solid defending skills, Howell also scored game-winning goals for the Planets in both of their WPIAL quarterfinal and semifinal matches to help get Mars into the Final.

Moon pushed their way into the box a few times in the early going, and sure enough, in the 12th minute, Romah slipped behind to the far post side, where she got in on the end of a cross, where she had a couple of chances to beat Kate McEnroe

McEnroe made the first save on Romah’s low-left footed attempt, but on the rebound the senior midfielder delivered a shot to sprang the net back and gave the Tigers a 1-0 lead.

“Skylar [Leseck] played a great first service instead of attacking the end line, like we’ve been doing all year,” Pfeiffer said.

“We had runners on the back side. Everything we put in the last couple days, that goal came from the training grounds.”

With Moon holding the early lead, the match shifted into a battle that played out for much of the remaining 68 minutes in the midfield, with neither side conceding much in the final third.

Moon had the table slightly tilted in its favor through the match, generating 11 shots (five on frame including the two from Romah early on), but Mars drew a number of fouls, creating chances for Indiana commit Piper Coffield to lineup some dangerous balls into the box.

The Tigers defended well, and had to contend with pressure from the Planets a few times, but Leech was there to make a couple saves and came off her line a few times to deny dangerous cross attempts.

In the 51st minute, Mars may have had its best chance when a few shot attempts were blocked by Moon defenders, then Mars’ Ansley Ray redirect poke toward an open net was saved off the line by Moon’s Ayva Wiech.

Gerlach said that all of his players reacted in unison, pointing out that it couldn’t have been a coincidence that they all were mistaken in thinking the ball crossed the line.

In the 64th minute, Leech made her most impressive play, when she showed off her impressive vertical leaping skills to snatch a dangerous cross away and deny a Coffield’s well-timed jump for a header attempt.

The match also got pretty physical, and at different times, both sides had some issues with the officiating, to the point where Mars’ bench did pick up a yellow card.

Mars set up a few more free kicks, eminating from Coffield, but Moon’s defense held its own.

“We didn’t do enough with our set pieces,” Mars’ Head Coach Blair Gerlach said as he reflected on the disappointment that day.

“They played a great game, and they’re a great team,” Gerlach said after his team’s first loss in nearly four years, to Moon.

The early rounds of the PIAA tournament brought a few tough challenges for both Moon and Mars, but ultimately they passed each test playing to their respective strengths.

Mars recovered from the WPIAL Final loss as they took to the road with a 5-0 romp vs Bradford, then beat Lower Dauphin, 2-0, in the quarterfinal round, as Howell returned to the lineup to score one of the Planets goals.

The Tigers reaped the rewards of their WPIAL win, by staying at home in the first round, beating fourth place Latrobe, 2-0, then cruised past Plum with a 4-1 victory, thanks in large part to its super striker, Hailey Longwell, who had a hat trick.

“The girls are excited to keep playing,” Pfeiffer told the Pittsburgh Tribune-Review after the PIAA Quarterfinal win.

“It’s not the same team as last year when we won (the PIAA Class 4A title). It’s a new experience for some of the kids with new goals and expectations. But the desire to win and be a champion never changes.”

With Howell back, the Planets have a chance to reinforce its backline against the Tigers, and add another key attacker to the fold.

Another interesting note, in the WPIAL FInal, Moon only used one player off the bench (Kendall Deydek), while the Planets used four subs for a total of 142 minutes.

As Moon reaches its 23rd game, using a lineup that only goes one player deep in big games, they may be tested by a Mars squad that’s not afraid to go to its bench, and could have one of its best players back for the rematch.  However, the Tigers haven’t had to venture too far, and Mars may be a bit more travel weary after taking two longer trips last week

Before walking off the Highmark Stadium turf, it was clear that Gerlach was hoping that these two teams would get a chance to meet again.

“This was highly anticipated because there are two good teams. Maybe we’ll be real fortunate, and both teams will be super healthy,” 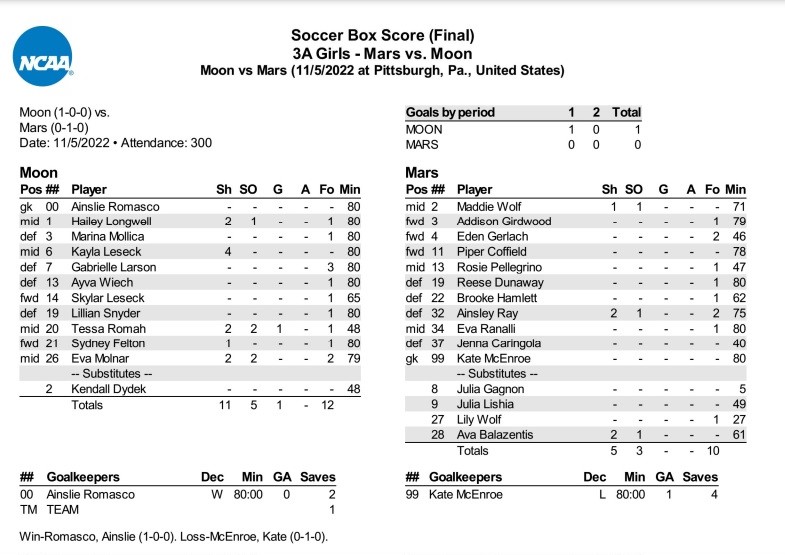