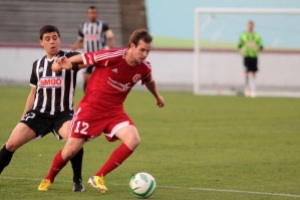 Brian Ownby goal in the 24th minute is the difference so far in Riverhounds-Kickers battle at Highmark Stadium.

FIRST HALF SUMMARY
Richmond Kickers 1 Pittsburgh Riverhounds 0  (GOAL:  Brian Ownby RICH  24′)
Both teams started off with a very deliberate pace, feeling each other out.
The Riverhounds seemed to be more concerned with staying organized — keeping numbers back.
They were able to set up a corner kick in the 13th minute as a Vini Dantas shot was blocked. Stephen Okai tried to send a one-timed shot on the rebound from about 25 yards, but missed right.
In the 16th minute, while Richmond was clearing a ball out of danger inside the box, a ball appeared to graze the arm of Cameroonian defender William Yomby. But the referee Donovan Noocha didn’t reach for the whistle and let them play on.
But in the 23rd minute, Hounds defender Anthony Arena slipped trying to clear a routine ball played to him, and Richmond’s Brian Ownby swept in, make a run inside the box and drilled a ball past Calle Brown to give the Kickers an early 1-0 lead.
It was Ownby’s fourth goal of the year, tying him for the team lead with Matthew Delicate, who didn’t start.
Riverhounds goalkeeper, Brown made his pro debut in place of Ryan Thompson, who was resting a sore back.
Riverhounds starting eleven included: Brown (GK), Anthony Arena, Willie Hunt, Tyler Pasher, Matt Dallman, Danny Earls, Stephen Okai, Mike Green, Rob Vincent, Kevin Kerr and Vini Dantas.