BREAKING DOWN THE HOUNDS: Looking To Light-up Louisville 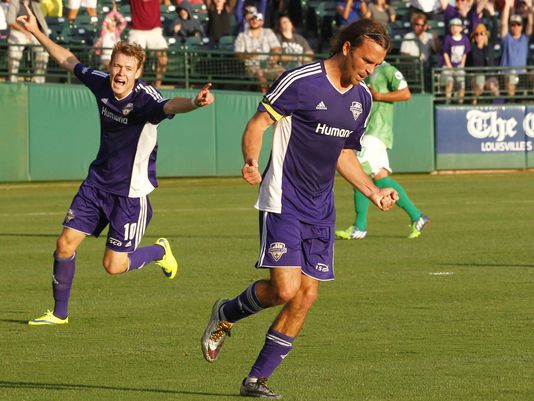 Former Riverhounds and Chicago Fire forward, Matt Fondy (18 goals) has brought star power to the Louisville line up this year.

Pittsburgh Riverhounds (9-9-5, 32 points) vs Louisville City FC (13-4-6, 45 points)
Saturday, August 29, 7:30 p.m.
Louisville Slugger Field
Hounds fans can watch a live stream of the game on Riverhounds.com.
CLOSER LOOK:  LOUISVILLE CITY FC – A TEAM ON A TEAR
It’s been an impressive debut season for Lousiville City FC.
You could make the case that they are the most dangerous team in the USL’s Eastern Conference right now.    They started off the season with a mostly impressive run of results relying on their strong defense.  But as the season has gone on, they’ve also become a potent scoring team.

James O’Connor’s team overtook Pittsburgh as the USL’s top scorers last weekend with a 3-1 win over the Charleston Battery. Louisville has found the net 48 times in 23 games with the Riverhounds scoring one fewer. Former Hound Matt Fondy scored twice against Charleston to bring his season tally to an Eastern Conference leading 18 goals, one ahead of Pittsburgh midfielder Rob Vincent.

Fondy’s recent scoring run for Louisville has moved him into third place in the USL’s all-time leading goalscorers list ahead of Jose Angulo, another ex-Hound, and Charlotte’s Jorge Herrera. The 26-year-old Californian now has 34 career goals in the league.

Here’s a nice feature about Louisville’s remarkable success in their inaugural season on USL web site.

PREVIOUS MEETINGS
The Hounds had a very late 1-0 lead in the teams first encounter at Highmark Stadium in April, but gave up an equalizing Kadeem Dacres goal in stoppage time to settle for a disappointing tie.  In July, LouCityFC returned to Pittsburgh to snatch a 2-1 win, thanks to Fondy’s winning goal from a corner kick on the night the Hounds honored U.S. Women’s World Cup winner and local hero, Meghan Klingenberg.
GAME STORYLINES
The USL’s top two offenses and two of the league’s top three goal scorers battle each other in this match-up.
City has scored a league-leading 48 goals and the Riverhounds have tallied 47. With Louisville’s Matt Fondy boasting 18 goals and the Riverhounds’ Rob Vincent right behind with 17, many eyes are on them to see if they can keep up with OKC Energy FC’s Danni König (19 goals) and potentially reach or surpass the USL single-season goal-scoring record of 20 set by Orlando City SC’s Kevin Molino in 2014.
The most important element in this matchup is reaching the USL Playoffs, and City is nearly there. A Louisville victory would clinch a postseason berth in the club’s first season.
Pittsburgh (9-9-5, 32 points) has dropped to seventh place and needs a strong run to cap off the season and gain a top-six spot in the Eastern Conference standings
INJURIES / SUSPENSIONS / ROSTER UPDATES

Pittsburgh captain Danny Earls misses this week’s trip after his late dismissal in Charlotte last weekend. Head coach Mark Steffens has an otherwise full roster to select his traveling party from, with one big exception.  Earls’ fellow holding midfield mate, Stephen Okai, will be sitting out due to a leg injury.

Riverhounds midfielder Kevin Kerr returns from a one-game ban for yellow card accumulation. Kerr continues to lead the USL in assists with nine.

WHAT TO EXPECT
It’s been the same old story for the Riverhounds when facing the tougher defensive units in the USL.   Their usually dangerous attack has been slowed down to the tune of an 0-6-2 record against the top defensive teams.  I wrote about this earlier in the week, outlining the Hounds difficulties against the top defensive teams.
Add to that the loss of both Okai and Earls, who are steady, unsung contributors in the center of the field, and the Hounds have their work cut out for them at Louisville.  Chances are that Steffens moves Vincent in to the middle and could likely start their newest pick up Ben Newnam to play one of those holding midfield spots.
The Hounds will have to figure out a way to contain former Hound Matt Fondy, who’s been on a tear of late.

“Good players will always find ways to be dangerous,” said Riverhounds assistant coach Josh Rife.
“Our goal is to limit Fondy’s opportunities and force situations that are difficult for him and favorable to us.
“We’re up to the task.”

UP NEXT
The Hounds return home Sept. 5 when the Charleston Battery visit Highmark Stadium for what promises to be another tense battle for playoff positioning. Charleston won 3-1 in this season’s only previous meeting in South Carolina on May 9