Rob Vincent left for a big opportunity with MLS last week.
Now today, Sterling Flunder, who was initially announced as one of the Riverhounds who re-signed with the team earlier this year, has announced his retirement.
I’ll have more on this later, but in the meantime, here’s the official Hounds release:

Pittsburgh Riverhounds have announced that veteran defender Sterling Flunder has retired from playing with immediate effect. He remains with the club in a full time capacity as a director of the Riverhounds Academy East youth training program.
Flunder, 30, signed his first professional contract with Pittsburgh in 2010 after playing collegiately at Marshall University in West Virginia. He made his debut against Charleston Battery on May 15, 2010. Flunder retires as the longest tenured player on the Riverhounds roster with 123 regular-season appearances in six seasons.
The Seattle area native made 18 appearances for the Hounds last year in all competitions. His final game was the 4-2 extra-time loss at the New York Red Bulls II last September that ended the Hound’s United Soccer League playoff run.
“I’m privileged to have played six years of professional soccer,” Flunder said. “It was a goal set many years ago and I feel fortunate to have accomplished one of my dreams.
“I am forever indebted to the Riverhounds fans, the Steel Army and everyone that has believed in me.
“I’m also very appreciative of the Riverhounds for providing me with a platform to develop young people through coaching.” 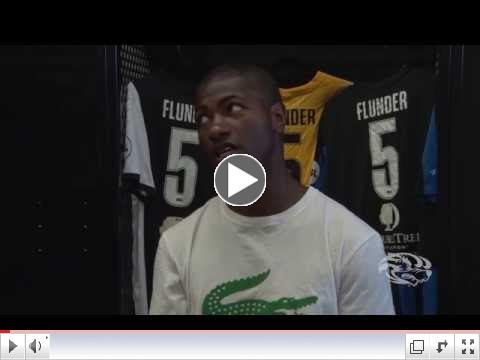 Flunder took on the challenge of developing the Academy East in a new market in 2013. Training takes place year-round in Scottdale, Pa. at the Shallenberger Recreation Center, a private facility offering a new synthetic turf surface and a Performance Training Center featuring equipment to help build strength and speed in young players.
The next phase of the Academy East’s development will see Flunder leading the club’s training program while also training coaches from local soccer associations and high school teams. About 250 young players train at the Academy East with the Riverhounds looking to expand this through the development of enhanced facilities.