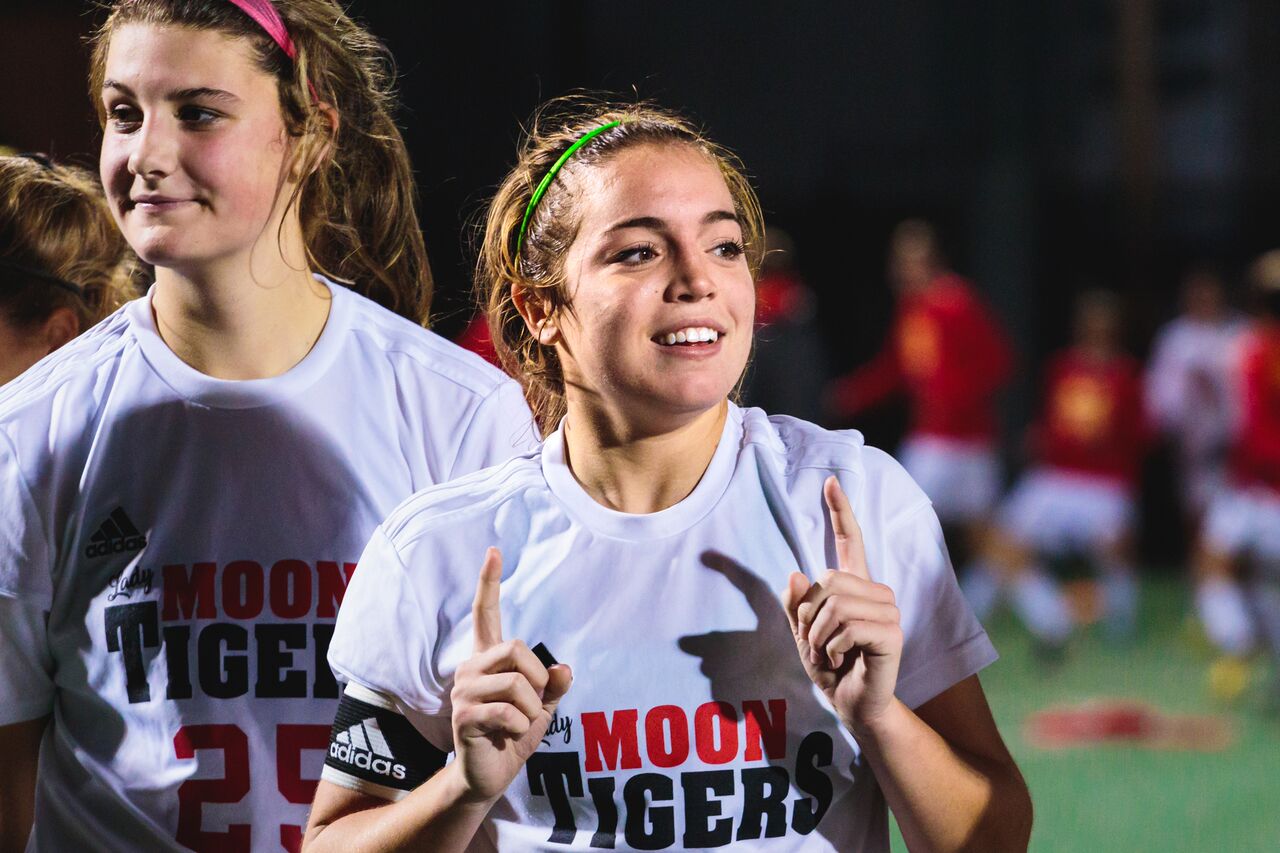 With Delaney Snyder — and a super supporting cast — the Moon Tigers completed an undefeated season by capturing its second consecutive PIAA championship on Saturday, beating Villa Joseph Marie 1-0, at Hershey Park Stadium.
In a match where both teams struggled to generate scoring chances in the final third, Moon controlled most of the play at midfield — then looked to its star forward, Snyder, to take matters into her own for the game’s lone goal near the end of the first half.
Snyder took control of ball near midfield, then darted past a few Villa Joseph Marie defenders — found room as she got into the box to unleash a shot that sailed into the left side of the goal.

GOOOAALLL@_MLTS_
Delaney Snyder takes care of it herself to give Tigers a 1-0 lead in 1st half.#PIAA pic.twitter.com/EYhOg5OFjA

It was Snyder’s 56th goal of the season.
The Tigers controlled much of the match — limiting the Lions’ attack as goalkeeper Madison Sleva was forced to make only two saves.
With the victory, the Tigers (26-0) extended its winning streak to 42 games, going back to last fall.

GOOOAALLL@_MLTS_
Delaney Snyder takes care of it herself to give Tigers a 1-0 lead in 1st half.#PIAA pic.twitter.com/EYhOg5OFjA

4:30 p.m. – not much to report. Few good efforts into box for Moon — mostly individual chances by Snyder, while Villa Joseph Marie have found room to counter, but Moon limiting them to one shot on targe.
4:02 p.m. – with boys game  before going late — looks like they’re kicking off closer to 4:15 p.m.
PREGAME NOTES:
Bill Pfeifer‘s Moon girls soccer program has had no match in the past two years in girls 3A WPIAL and PIAA competition — and have one more step to pull off an impressive repeat of both WPIAL and PIAA soccer crowns.
After being tested by a talented, but young Mars team in winning the WPIAL final 3-2, the Tigers have rolled through the first three rounds of the PIAA playoffs by an 18-1 margin.  They’re looking to complete an undefeated season with its second consecutive PIAA title — in a rematch of last year’s final. Miami (OH) recruit Delaney Snyder has been the leading force behind a talented group that includes Emily Orr sending in pinpoint passes from the midfield and flanks, and goalkeeper Madison Sleva who’s posted 18 clean sheets. Players such as defender Lauren Baumgartner, midfielder Chloe Kuminkoski and midfielder Kylee Evans, whose game-winning header secured WPIAL final win over Mars — are all part of what has been a special group that is riding a 42-game winning streak (last lost Sept. 2016).
In the semifinal — against Villa Marie (Erie), Snyder added three goals (all within the first 12 minutes!) to her season total of 55 in a 7-1 rout.
Now they take on Villa Joseph Marie (from Bucks County, not to be confused with Villa Marie, from Erie, who the Tigers just beat in the PIAA semifinal) in the rematch of last year’s 2-1 Moon win.
VJM is back in the state championship game for the fourth-consecutive season. The Jems are ranked No. 9 in the state by the Pennsylvania Soccer Coaches Association and No. 46 in the country by Top Drawer Soccer. Villa arguably has the most successful girls program in state tournament history. The Jems have won 10 state championships including the 2014 crown when they beat — yes you guessed it — Villa Maria. They will be searching for their 11th title in 17 trips to the final on Saturday.
This Villa squad, which was in a rebuilding mode early in the season, does not score a lot of goals, but finds ways to win. Senior midfielder Maddy Jiminez is always a threat to score as are fellow senior midfielders Miranda Behr and Megan O’Neill. Junior Sydney Riley can swing between midfield and defense and sophomore Jillian Hunter can score from up top and freshman Katie Sullivan is dangerous in the midfield.
Defensively, senior Erica Behr leads a talented group that has given up just 10 goals in 24 games. She is joined by sophomores Paige Santoro and Jackie Levins. They play in front of senior keeper Maria Tunney who has 16 shutouts in her first season as a starter.