The Pittsburgh Riverhounds SC’s attack got the jump start it needed after struggling early in the season, converting on its opportunities to beat the New York Red Bulls II, 3-0, for its first win of the season on a rainy Friday evening at Montclair State University Soccer Park in New Jersey.

The Hounds stretched out the high pressing Red Bulls II enough by using the width and forcing them into trying to play the ball out of the back, eventually capitalizing on a few key mistakes.

Pittsburgh scored twice in a five-minute span in the first half, with Danny Griffin and Alex Dixon scoring their first goals of the season, then Russell Cicerone added another in the second half after a brilliant bout of short passes.  Goalkeeper Danny Vitiello had four saves in earning his first clean sheet of the season.  Dixon also picked up an assist with a clever highlight reel back heel that set up Cicerone’s finish.

With the win, the Hounds improve its overall record to 1-2-1 (4 points). The win is the 50th in all competitions for Bob Lilley as the Hounds’ head coach, becoming the first in club history to hit that number, and the 301st win in his career.

Each goal came on an assist, with forward Albert Dikwa setting up Griffin in the 22nd minute with a pinpoint cross from the left side that gave the Hounds the early lead in the 23rd minute.

In the 28th minute, the Hounds high press forced a giveaway deep in the final third, as Dani Rovira seized the moment by taking possession, then sliding a low cross to the middle of the box for Dixon, who delivered a quick shot into the left side of goal to beat Red Bulls II’s keeper AJ Marcucci.

In total, the Hounds sent 14 crosses into the box in the first half, which saw each team with six shots — and three on target for each side.

The Red Bulls owned the possession battle on the wet surface and also looked very dangerous in countering transition moments on three occasions in a 10 minute stretch in the first half, but each time, Vitiello stood firm to come up with vital saves.

The Hounds put the match further out of reach early in the second half when they built up a few passes from the right side to the edge of the box, ending up with Cicerone and Dixon connecting on a 1-2, as Dixon slid a clever back pass through to Cicerone, who smashed a hard shot from eight yards into the back of the net.

Look for a more detailed recap and post match reaction later in the evening — and Analysis & Player Grades to be posted over the weekend. 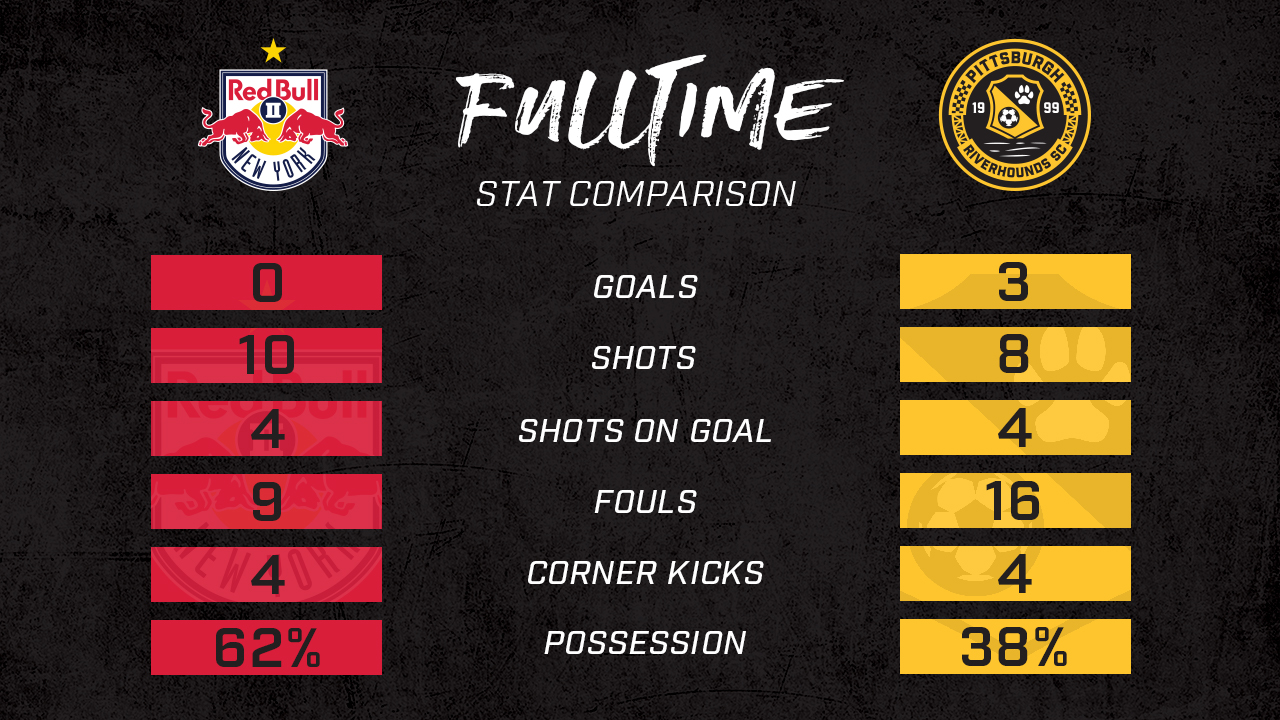 78′ — Red Bulls II get behind Hounds — as Mitchell has a chance but his low shot is saved by Vitello who comes off his line.

62‘ — Attempt missed. Mekeil Williams (Pittsburgh Riverhounds SC) header from the centre of the box is high and wide to the left. Assisted by Kenardo Forbes with a cross following a corner.

Russell Cicerone
Nice work by Hounds with short passes on edge and into box finishing with clever back heel by Alex Dixon through to Cicerone.
That’s the dynamic play in final 3rd Lilley’s looking for — isn’t it?
3-0 Hounds lead Red Bulls II

49′ — Forbes gets forward but can’t convert.

44′ — clever ball from near midfield from Dover that slips through for Dikwa but shot is saved!

35‘– Attempt saved. Omar Sowe (New York Red Bulls II) right footed shot from the right side of the box is saved in the bottom right corner. Assisted by Jake LaCava.

29′ — Red Bulls almost get one back. Jake LaCava tries a through ball, but Roald Mitchell is caught offside.

Alex Dixon buries it!
Nice work by Hounds high press to get turnover on the end line.  It’s Kenardo Forbes from left side who lays ball through middle of box.
2-0 Hounds lead

Nice cross in from Albert Dikwa — and Griffin takes it from there with a clinical one-time finish!

18′ — good work by Russell Cicerone to set up corner.

15′ — RB dangerous in transition getting forward and into box quickly. Attempt missed. Jeremy Rafanello right footed shot from the right side of the box misses to the left. Assisted by Roald Mitchell.

11′ — Hounds high press is working well to generate a few turnovers. Latest ends up with Dover open on right side (edge of box)

3′ — Both sides with early corners — each time they missed their mark.

7:05 — the match has kicked off — as they’re playing in soggy conditions at MSU Soccer Park. 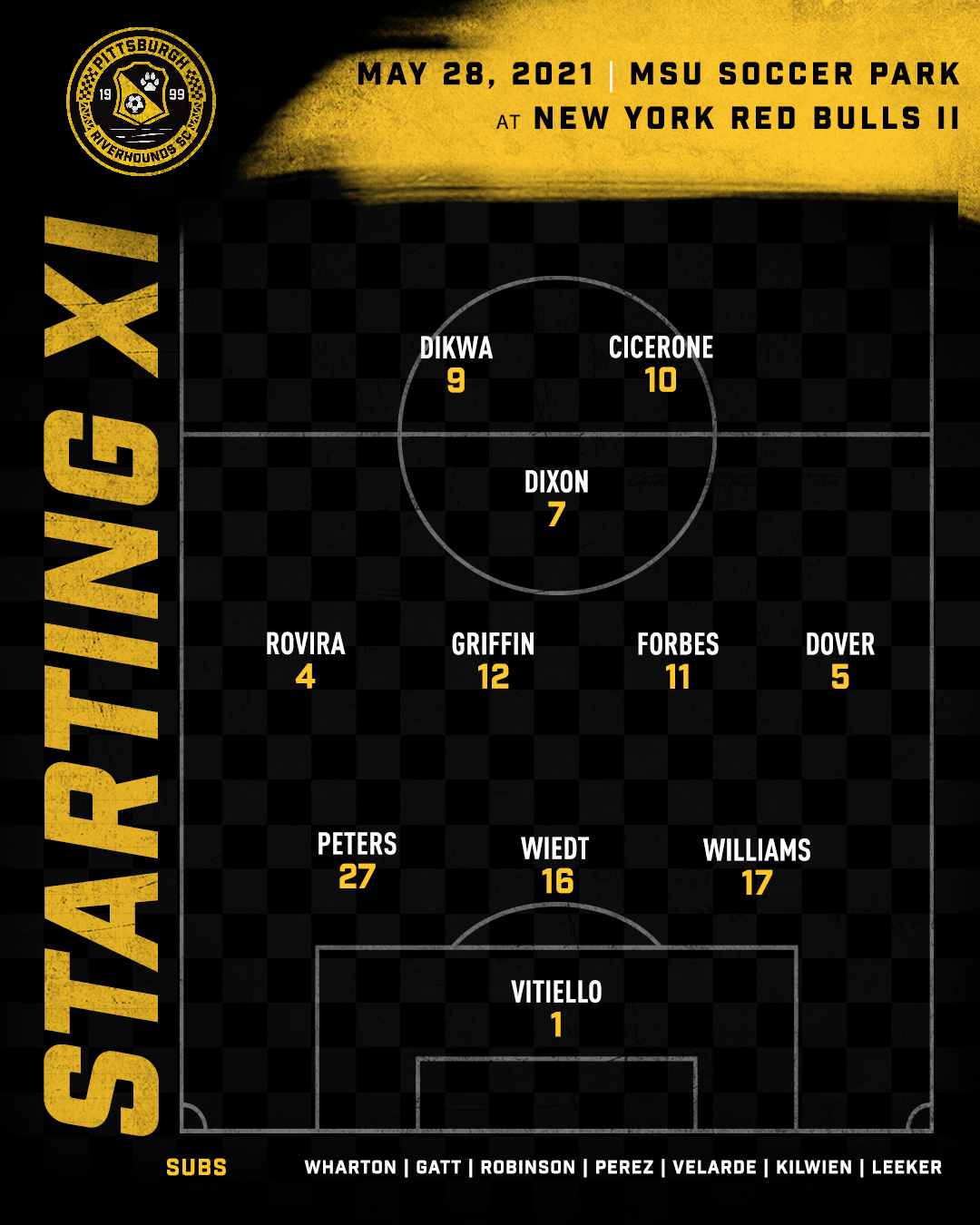 We have boots on the ground in Jersey.

Hounds Notebook: Without a win, pressure mounts with another two-game road swing

Analysis & Player Grades: Lots of ‘half-chances’ add up to zero for Hounds

The Hounds seek their first win of the season when it plays New York Red Bulls II at 7 p.m. this Friday, May 28 at MSU Soccer Park. The match will be streamed via ESPN+.

The Hounds (0-2-1) could not find the net in their home opener last Saturday against Charlotte Independence, despite attempting 21 shots. Meanwhile, New York (1-2-2) scored two second-half goals to earn a point at the Charleston Battery on May 23.

The Hounds haven’t failed to earn a win in their first four matches since 2016, but given their recent history against New York Red Bulls II, there is reason for optimism. Dating back to the arrival of Bob Lilley in 2018, the Hounds have won five of seven matchups against New York and didn’t allow more than two goals in any of those matches.

Preview: We know, and do not know, the Red Bulls
Analysis & Player Grades: Hounds capitalize on chances in final third to earn first win
Loading Comments...