Despite first place standing, Lilley’s not going to ‘sugarcoat’ his team’s performance

While it might be understandable to savor the team’s current status of jumping to the top of the standings on the strength of a 5-1-1 record in the past seven games, Riverhounds SC head coach Bob Lilley is still not satisfied with his team’s overall play.

Despite boasting a 7-4-3 overall record, good for 24 points, the Hounds veteran head coach wasn’t impressed with what he called a ‘hallow’ one-goal victory against the division’s last place team on Saturday.

“We had more of the dangerous moments, but overall we were poor on the night,” Lilley said after the match. “It’s frustrating because we started the game brightly, then we can’t string five passes together. We didn’t possess the ball; we didn’t try to possess.”

Loudoun had 59 percent of possession, but the Hounds held a 10-6 advantage in total shots.

Lilley has crafted a team that is designed to be more dynamic in the final third. When things don’t go the way he would like them to, he likes to let his players know about it right after each match.

Twice this season, after losses at home against Austin and on the road against Loudoun, Lilley has held nearly one-hour long huddles with his players on the field.

On Saturday — after a win — he held them on the Highmark Stadium pitch for a little more than 20 minutes.

“I could sugarcoat this, but if we play this way next week, we’re going to get hammered by four or five goals,” Lilley said. “We’re not close to the mark, game in and game out.

“Overall for me, we’ve underperformed. Our record is decent. We’re decent in the table. We should be coming of age right now. We think it should just magically happen. We made that game a coin flip tonight and I’m not OK with it.”

While there wasn’t a Zoom call with coach Lilley this week, the Hounds have put in a full week of training, gearing up for a Friday evening match at NY Red Bulls II — who despite sitting in 7th place — are unbeaten in their last three matches.

On Monday, Lilley decided to his get his team out and then off the field earlier than usual, to make some time for a film study session.

On Wednesday, defenders Mekeil Williams and Jelani Peters were back in training after representing Trinidad & Tobago in the CONCACAF Gold Cup.

Good to see our guys back on the South
Shore! 👋 👋 Welcome back @MekeilWilliams &
Jelani Peters 🇹🇹 pic.twitter.com/qYV22Ny03r

The Hounds have already earned a pair of wins vs the Baby Bulls this season, 2-1 decision at home on June 25 and a 3-0 triumph in New Jersey on May 28.

Against NYRBII, the Hounds are preparing for an opponent who wants to press and play at break-neck speed, especially on their home turf.

That has been a point of emphasis in practice this week, and as assistant coach Dan Visser pointed out after Wednesday’s training session, even the team’s 3-0 win on their previous trip to New Jersey wasn’t as comfortable as the scoreline seemed. New York outshot the Hounds, 8-6, and the Baby Bulls generally made life difficult for the Hounds, chasing them into a season-low 61.1 percent passing accuracy. For the second time this season, Hounds midfielder Danny Griffin was named to the USL Championship Team of the Week for Week 13, the league announced on Tuesday afternoon.

Griffin played a crucial role in the Hounds’ 1-0 shutout win over Loudoun United FC on Saturday, disrupting the Loudoun attack regularly from his central holding role. He won 4 of his 5 tackles in the match, made 15 recoveries and had six interceptions, all of which were team highs.

It is the second Team of the Week honor this season for Griffin, who holds the distinction of being the only Hounds player to have played every minute thus far in 2021 — 1,260 minutes in 14 matches. The second-year pro previously was on the Team of the Week in Week 6.

Stat of the Week

Hounds now are 7-0-2 in matches in which they have scored first, and 7-0-1 when they lead at halftime.

On the other side, the Hounds are 0-4-1 when conceding first and 0-4-1 when trailing at the half.  The one result came in their last road match at Charleston, when Pittsburgh found the equalizer from Tommy Williamson in the 85th minute. 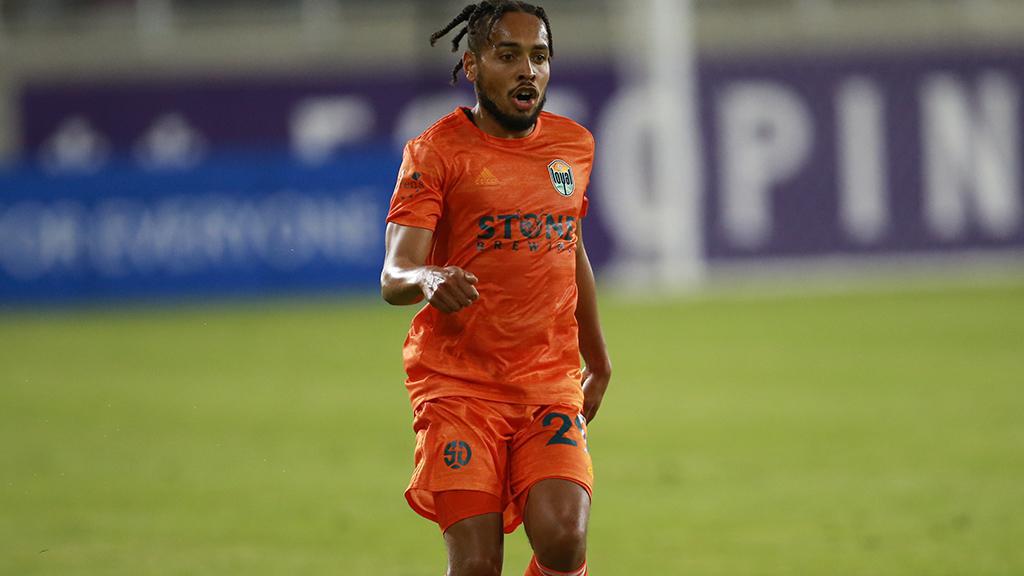 Thought this would be a good time to check in to see how some former Riverhounds SC players who recently played in Pittsburgh are doing.  While it’s not a complete list, here’s what some former Hounds are up to:

Thomas Vancaeyezeele (Birmingham Legion) – was recently acquired by Birmingham Legion in a deal with San Diego Loyal. where he made seven starts in the club’s first eight games of the season, before joining the French Guiana National Team for 2021 CONCACAF Gold Cup qualification matches. French Guiana made it to the final round of qualification before falling to Trinidad and Tobago this past Tuesday night in a penalty shootout. Vancaeyezeele started and played the full 90 minutes in the match and scored his penalty kick chance.

Neco Brett (Birmingham Legion) – Neco has been among the league leaders in goals scored in his second season in BIrmingham. The former Robert Morris University standout scored nine goals to lead the Legion in 2020, and currently has eight goals in 12 matches.

Kyle Morton (Houston Dynamo/Memphis 901 FC) – Morton was named USL Championship’s player of the Week in week 12 as he shone in first start after being loaned to Memphis.   After being the Hounds regular starter in 2019, Morton signed with and featured for Saint Louis FC in 2020.  He was signed by Major League Soccer’s Houston Dynamo this past offseason.

Robbie Mertz (Atlanta United FC 2) – After an early season injury which sidelined him for a number of games, Mertz has been a regular in the ATLUTD2 lineup, appearing in 10 matches, starting nine and logging 819 total minutes.  The Upper St. Clair High School and University of Michigan grad has not scored yet, but has an assist. Mertz has brought his usual, consistent high-level work rate in central midfield with 350 total passes (at rate of 35 per match), with 83% accuracy and second on the squad with 13 chances created. Mertz will return to Highmark Stadium in August when the Hounds take on ATLUTD2.

Ryan James (Birmingham Legion) – the Steel Army’s 2020 Player of the Year, James has been a constant in Birmingham’s lineup, making 12 appearances, with an assist as he’s played mostly outside left back.

Steevan Dos Santos (Tampa Bay Rowdies) – Dos Santos had an early impact with the Rowdies, scoring three goals (one of those against the Hounds!), in four appearances. Since then, the 31-year old forward has been sidelined by an injury.

Noah Franke (FC Tucson) – Franke didn’t play in USL Championship in 2020, but has returned in 2021 as he’s started 10 matches in this season, logging 862 minutes for the USL League One side.

Austin Pack (Charlotte) – the Hounds back-up keeper in 2019 has been with Charlotte the past two seasons, as back-up to Brandon Miller.  Pack has made one appearances in 2021.

Tobi Adewole (Phoenix Rising FC) – After a year with Saint Louis, Adewole signed with Phoenix in the offseason.  The former George Washington University standout has made seven starts in nine appearances with the USL Championship’s leading team in terms of total points and goals scored.

Hugh Roberts (Charlotte Independence) – Following a memorable season in 2018, Roberts moved on to Charlotte, where the veteran center back and former All-USL defender is now in his third season anchoring the back line for one of the Hounds Atlantic Division rivals.  (Roberts’ Tweet is from July 10 match when Charlotte played Phoenix to a 1-1 draw)

Christian Volesky (Keflavík) — following a solid bounce-back campaign in 2020 with the Colorado Switchbacks when he scored five goals in 16 appearances, Volesky played in 2021 in Iceland with Keflavík, where he’s scored one goal in seven matches.

Taylor Washington (Nashville SC) — Washington has been a constant with Nashville SC from its first two seasons in USL Championship and remained with the club as it transitioned to MLS.  This season, he’s made four appearances after making two in 2020 as an option as a left back and winger off the bench.  With Nashville’s USL side, the 27-year old former SuperDraft selection of the Philadelphia Union, made 59 appearances and scored twice.

Skylar Thomas (Memphis 901 FC — after a solid season in Pittsburgh in 2020, Thomas has moved on to Memphis, where he’s made nine appearances and scored one goal.

Ropapa Mensah (Sporting KC II) — Mensah has made seven appearances for SKCII, and has not scored yet this season.

Patrick Bunk-Andersen (Hillerød) – Bunk-Andersen returned to Europe in the offseason, and has since signed with Hillerød in his home country of Denmark.

Joe Greenspan – shortly after the 2021 season kicked off, I reached out to Joe to see how he was doing and if he was going to continue playing after the San Diego Loyal did not pick up his contract option after 2020 season.  Greenspan, the 2019 USL Defender of the Year, informed me that he decided to not pursue his pro soccer career any further.  Greenspan has decided to stay in San Diego, taking a job in the digital marketing space, as he let me know that he’s really starting to dive into some individual pursuits that were limited due to soccer.

Things continue to be transient when it comes to the landscape of professional soccer in the United States, and the USL continues to look to set itself apart.

The latest news coming out of the mid-summer meetings has USL starting to develop a plan to further separate its leagues (USL Championship and USL League One and League Two) from Major League Soccer (MLS).

Here are some bullet points of the meeting highlights as reported by Jeff Rueter of The Athletic.

Also, there was this nugget that’s been floating around…

Charlotte Independence management is looking at a self-delegation from USL Championship to USL League One, with MLS coming to town. #sportsbiz #soccerbiz https://t.co/C0u3Vq4zYi

Look for preview of the third match between the Hounds and NYRBII to be up on Friday along with a live gameday blog and postgame reaction.