Beating any team three times in the same season is never an easy task.

The Pittsburgh Riverhounds SC needed a strong second half to seal the deal in beating the NY Red Bulls II, 3-1, with goals from Russell Cicerone and Albert Dikwa, at MSU Soccer Park on Friday evening. Alex Dixon also scored in the 10th minute and added an assist and Kenardo Forbes added two assists to bring his USL Championship all-time leading total up to 43 helpers. With those two assists, he also became the Riverhounds SC’s all-time assists leader, with 29, surpassing Kevin Kerr.

With the win, the Hounds now stand alone in the top spot, at the moment in the USL Championship’s Atlantic Division, with 27 points and a 8-4-3 overall record.

The Hounds started the match brightly, advancing into the final third a number of times in the first 10 minutes.

They created the game’s opening goal after quickly building out of the back from their left side — then playing it through the center of the field to Kenardo Forbes, the USL Championship’s all-time assist leader.  From there, Forbes didn’t waste any time to sent a ball to the right side for Alex Dixon, who then did all the work himself to score his second goal of the season.

While Pittsburgh had the edge and more scoring chances in the first 25 minutes, the Red Bulls kept pushing every chance they could to get into the final third to create dangerous moments.

In the 27th minute, they broke through when midfielder Jake La Cava had too much room to advance into space, then sent a diagonal thru ball to split the Hounds backs to find Omar Sowe on the right edge toward the end line.

Hounds keeper Danny Vitiello came out to cut Sowe’s angle, but Sowe managed to find enough space to deliver a perfectly placed shot that barely rolled into the goal, just inside the left post.

Despite his stellar play in the central midfield, Forbes hasn’t scored a goal since the 2019 season, but he was sniffing a few in this match.  In the 43rd minute, he came close, but his finish after a nice, low cross from Dixon was waved off, as the flag was up.

Pittsburgh came out strong in the second half, pushing for the go-ahead goal.

Cicerone had a nice individual effort to create a shot opporutnity in the box despite running into a bunch of defenders in front of him in the 48th minute.

The Hounds took the lead in the 52nd minute on another assist from Forbes, who left the creative work again to the finisher. In this case it was Cicerone, who made a nice move to his left to get around a defender and the Red Bulls II keeper A.J. Marcucci for his career high and team leading seventh goal of the season.

Russell Cicerone jumps back into the top five in the league with his seventh tally of the year. @R_Cicerone7 🐶#NYvPIT | @RiverhoundsSC pic.twitter.com/6kpYNOFWvF

The Hounds completed the scoring when Dikwa made a well-timed run into the goal box to knock-in a cross from Dixon, from the right side, after a quick build up.

It was the second goal of season for the Hounds’ top man,.

The Hounds’ continued its dominance in the past few years against the Red Bulls II, as this was their fifth straight win, as they now lead the all-time series. 9-7-1. 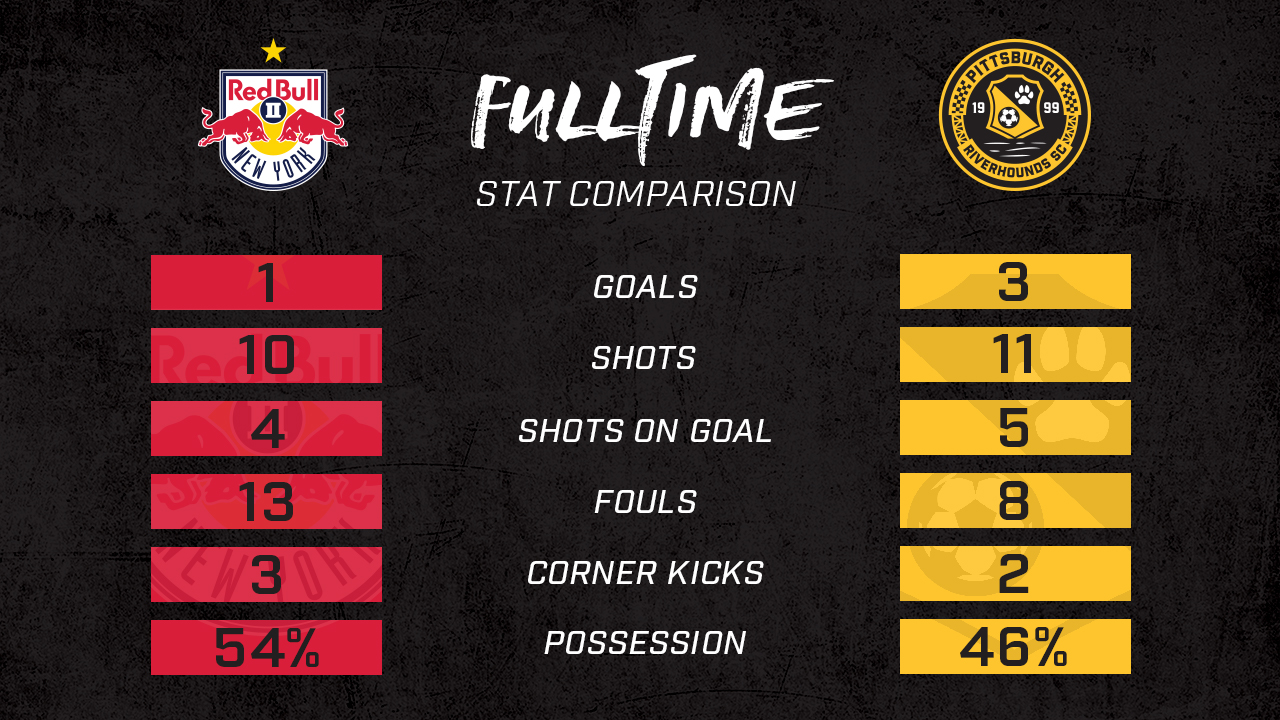 80′ — Hounds are defending better in 2nd half. NYRBII with just three shots (one on target — that nice save by Vitiello on La Cava) — forcing the Baby Bulls to try to be more patient.

Dikwa gets to it! Cross in from Alex Dixon, from the right side, on quick build up.

Second goal of season for the Hounds’ top man

Russell Cicerone jumps back into the top five in the league with his seventh tally of the year. @R_Cicerone7 🐶#NYvPIT | @RiverhoundsSC pic.twitter.com/6kpYNOFWvF

56′ — Another nice save by Vitiello who is in good position to deny La Cava who got behind Wiedt.
Hounds hanging on to its 2-1 lead — at moment — by skin of Vitiello’s glove.

48′ — Hounds start the 2nd half with no changes (no surprise) — and Cicerone with a nice individual effort to create a shot opporutnity in box despite a bunch of defenders in front of him.

Here's the disallowed goal, although without a great angle on it.

For the second week in a row (after figuring out who scored for us last week), we let you be the judge.#UNLEASH #NYvPIT pic.twitter.com/y2gV7Dzion

43′ — Goal waved off — flag up. Nice quick passing — Cicerone outside center of box to Dixon on right side, who sends a quick low cross to Forbes breaking for near post. Forbes knocked it in but he remains snakebit and w/o a goal in 2020 and now 2021.

36′ — Great play by Vitiello to come out and get hand on La Cava low cross that was intended for Sowe who was breaking behind by far post.

32′ — YELLOW CARD – Dani Rovira (Pgh)
Things are too open-ended for Bob Lilley’s comfort right now.
Rovira picks up a yellow card with challenge that slows down another RBII quick counter.

Nice thru ball from Jake La Cava splits the Hounds backs.
Vitiello comes out to cut angle away, but Pittsburgh gave away too much space to allow that to happen.
Sowe with tough angle shot, but puts it through

Here’s a look at the Hounds goal, which started with a quick build-up out of the back from the left side — through the middle to Kenardo Forbes — and ended with a dynamic play by Dixon working his way in from the right edge.

14′ — Cicerone now from the top of the box — forces Marcucci into another save.

Terrific, quick build-up leads to Dixon beating his man on the edge of box as he finds room to deliver a left footed shot from 16 yards out.  It was Kenardo Forbes wit wh the assist.

8′ — Hounds called for handball about 30 yards from goal. Great free kick chance for NYRBII. Rafanello puts it on as Vitiello dives to get a hand on it as it also grazes off right post!

5′ — Hounds with a few decent advances into final third. Latest Through ball from Wharton to Cicerone is saved by Marcucci, but also flag was up for off side. 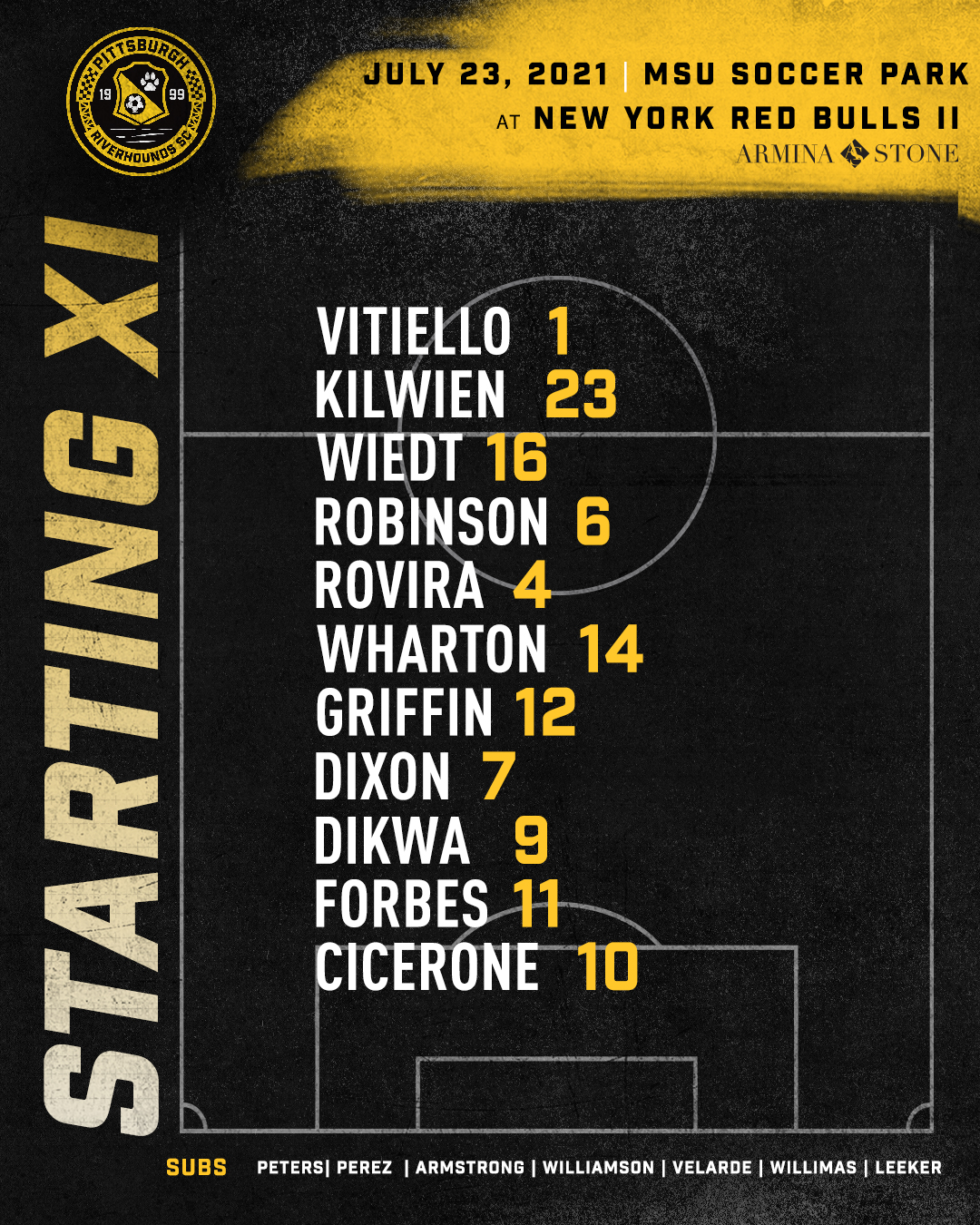 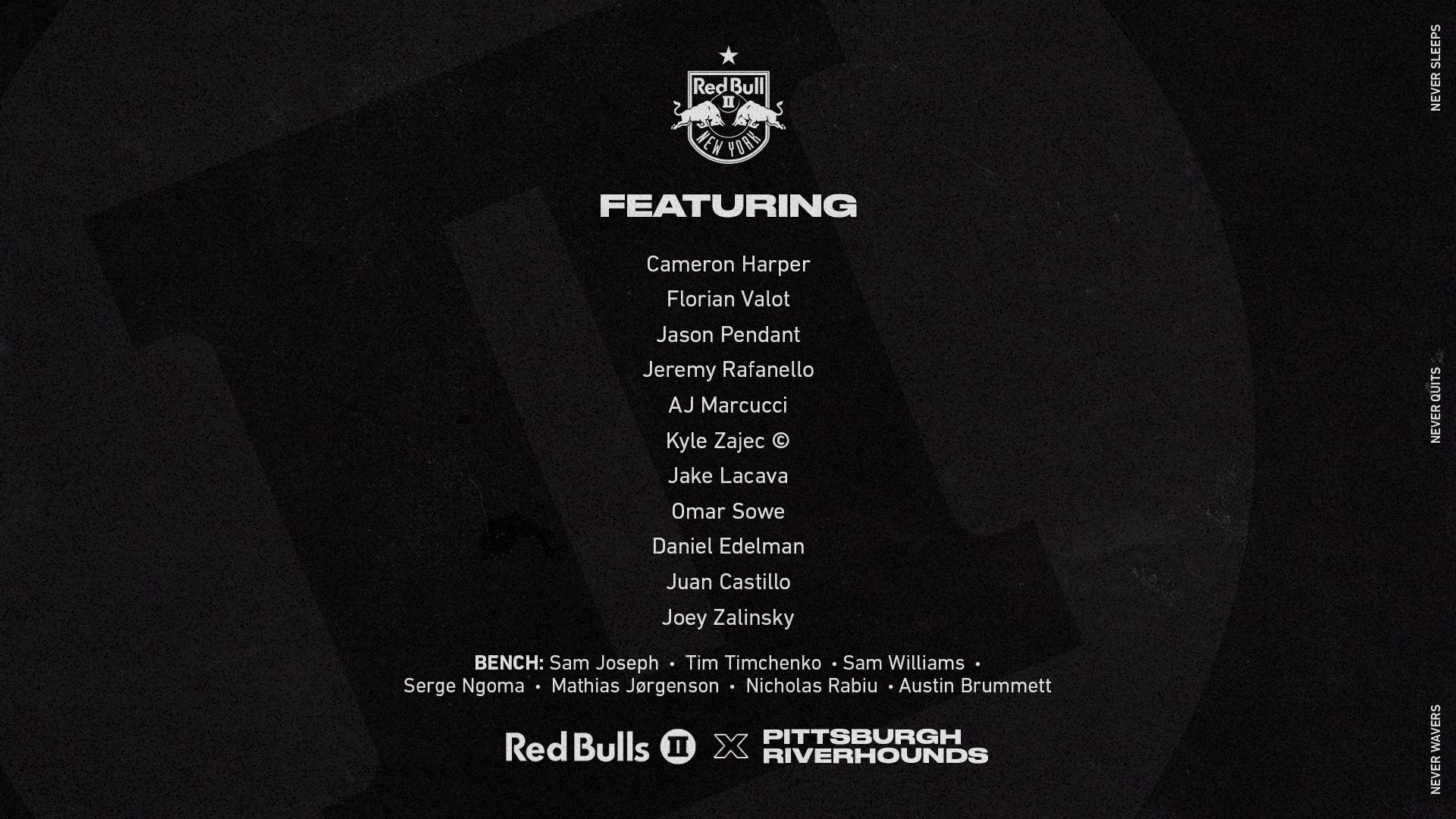 Bus 491 and operator both WOKE UP THIS MORNING FEELING FINE CAUSE WE'VE GOT THE RIVERHOUNDS ON OUR MINDS!!!!

Coming off a hard-fought, 1-0 home win over Loudoun United FC last Saturday that saw Russell Cicerone score his team-leading sixth goal of the season, the Hounds (7-4-3) aim to keep their momentum going with a series of games against fellow Atlantic Division title contenders looming. The Hounds won 3-0 at Red Bulls II on May 28 and 2-1 against them at home on June 25.

Reinforcements have arrived for the Hounds back line, as center backs Mekeil Williams and Jelani Peters rejoined the team in training Tuesday after playing for Trinidad & Tobago in the CONCACAF Gold Cup. Both made the trip with the team and could play Friday.

New York (3-6-4) has been a team in improved form recently. The Baby Bulls are 2-1-2 in their past five matches, with the lone loss being the June 25 match in Pittsburgh.

Most recently, New York drew 2-2 with Hartford on July 10. Their team was scheduled to host Charlotte last weekend, but the match was postponed due to a positive Covid-19 test within the New York organization. Red Bulls II was able to return to training this week, and Friday’s match is slated to go on as planned.

Because of the postponed match, New York will be without starting defender Emir Tombul against the Hounds because of his suspension for being sent off in the draw with Hartford.

All-time, the Hounds are 8-7-1 against Red Bulls II, a result of winning the past four meetings between the sides.