The Wake Forest Demon Deacons came out charging and never looked back in beating No. 5 Pitt, 3-1, at W. Dennie Spry Stadium on Friday.

Wake Forest came out with a high press, leading to numerous Pitt giveaways.

In the 16th minute, Nico Campuzao made a great save on initlal shot from Wake Forest’s Omar Hernandez after one of those Pitt turnovers.

Campuzano couldn’t corral the ball, and Kyle Holcomb gets to it for the goal in the box.

Pitt had a chance to tie, as sophomore Bertin Jacquesson sent a cross from left to right inside the box to Rodrigo Almeida, but the senior from Salvador Brazil’s shot was saved by Trace Alphin.

On the Demon Deacons next corner kick attempt, Garrison Tubbs rose above the crowd at the far post to give the home side a 2-0 lead.

The Panthers matched the Deacons in the first half shot total (6-6), but couldn’t convert on its chances, as their efforts in the final third fizzled with shot attempts from distance.

Trailing by two goals, Pitt started the second half trying to methodically build up possession and keep the ball in the attacking side of the field to offset Wake’s pressure.  The home side defended well, then eventually caught the Panthers on the counter in the 70th minute.

Pitt’s defenders couldn’t recover as Chase Oliver’s shot was deflected but caught goalkeeper Nico Campuzano out of position, as the ball trickled past the goal line to give Wake a commanding 3-0 lead.

The Panthers pushed hard in the final 15 minutes, eventually getting one back, when Veljko Petkovic scored his fifth goal of the season, as Pitt finally broke down Wake Forest in the box. Rodrigo Almeida had the assist.

With the loss, the Panthers drop to 1-1 in the ACC.  It was Pitt’s third loss in four road matches this season.

The Panthers will stay on the road when they return to action next Saturday, September 25 against No. 2 Clemson.

Look for starting line-ups and updates from the game to be posted here.

Late push in last 15 minutes results in a goal for Panthers, but clearly not enough. Pitt is now 1-3 on road this season and now 1-1 in

Wake’s Leo Guarino gets the Red Card!
Playing up a man, Pitt has five minutes to try to get two back.
Anything’s possible.

Veljko Petkovic — the assist from Rodrigo Almeida — and the Panthers finally break down the Deacons for a nice goal.
Might be too little, too late.

76′ — The Panthers have been lacking patience once they get the ball near the 18. Settling for too many low percentage shots from distance. Credit to Wake’s back line though. They’ve been well positioned all night.

74′ — Closest Pitt has been tonight — Valentin Noel bangs one off the right post after clever pass from Matt Bailey.

Chase with his second goal of the season as Leo collects the first assist of his collegiate career!

this time on the counter,
Chase Oliver’s shot is blocked but deflection gets into goal past Pitt GK Nico Campuzano who couldn’t recover.
Panthers road woes continue.

65′ — The pace has slowed in the second half but Pitt can’t create anything dangerous in the box. Both shot attempts in half from Mirkovic and Sena have been from distance.

Deacons press has bothered Pitt throughout the first half.

Guilherme Feitosa (In) Veljko Petkovic (Out)

Garrison Tubbs with the header in a crowded box. The big fella outjumps everyone by the far post.

Pitt now in a hole, traling 2-0 early on the road.

Another early road goal surrendered by Pitt. Nico Campuzao with a great save on initlal shot from Wake Forest’s Omar Hernandez. But Campuzano couldn’t corral the ball, and Kyle Holcomb gets to it for the goal in the box.

4′ — Great chance early for Petkovic — but nice tip diving save by WF keeper. 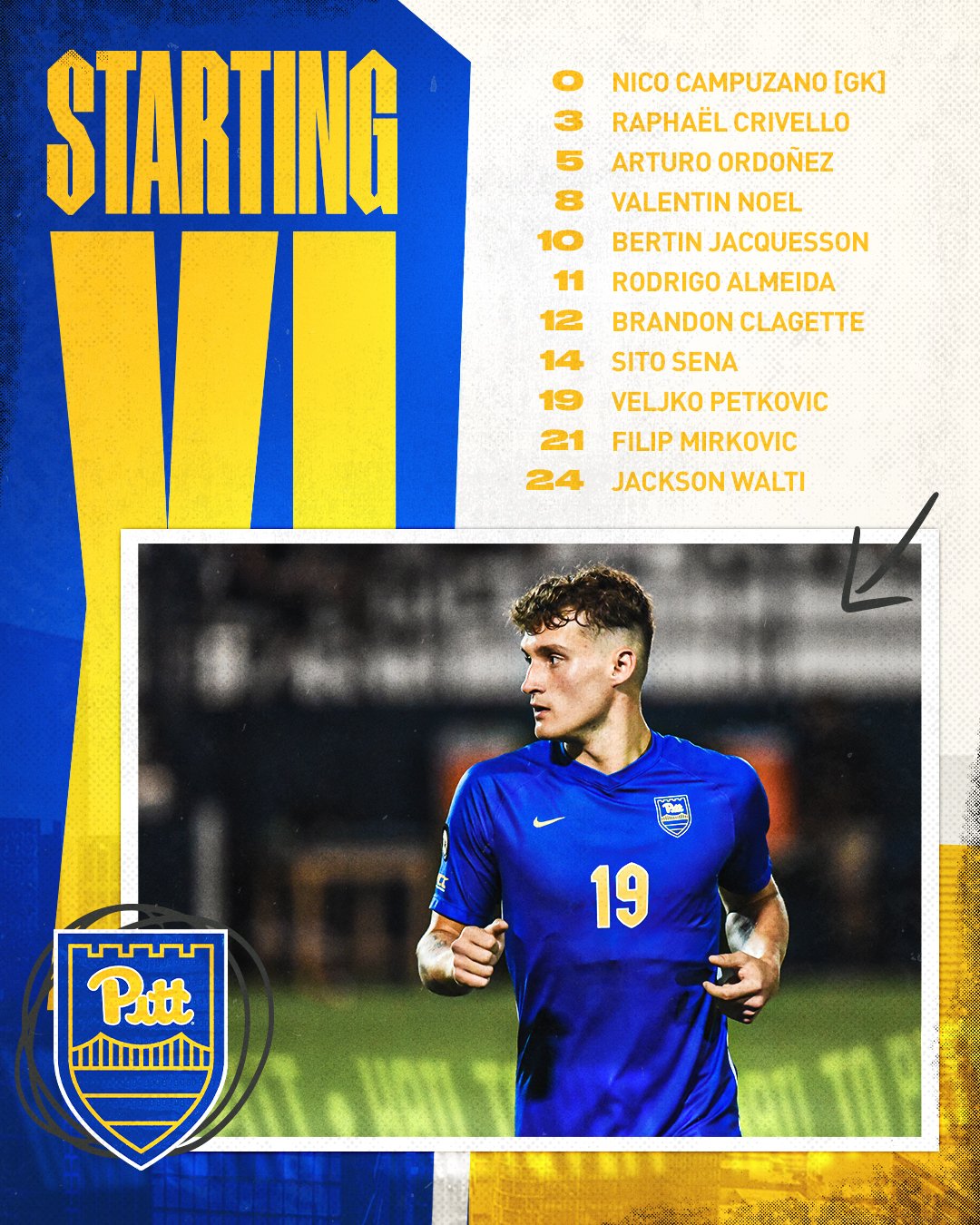 –        The Demon Deacons have met the Panthers four times prior to Friday night, winning all four matches dating back to 2013.

–        Both Omar Hernandez and Chase Oliver have one goal and one assist each.

–        Rodrigo Almeida scored his fifth goal of the season and third in his last two games.

–        Jasper Löeffelsend and Arturo Ordoñez each tallied an assist on Almeida’s goal. Löeffelsend left Penn State as the nation’s leader in assists with five.

–        Among his accomplishments at Wake Forest was a national championship in 2007, guiding the Demon Deacons to a 22-2-2 record. Wake Forest made four consecutive College Cup appearances from 2006-09.

–        Graduate student Jasper Löeffelsend (yas-pur Law-full-zend) finished the 2020-21 season as one of the best passers in the country and is keeping that status early on this season.

–        The defender recorded his first assist of the year at West Virginia and followed that match up with two at home vs. Lehigh.

–        Löeffelsend has tallied an assist in each of his last two matches, including North Carolina at home and Penn State on the road.

–        It is a rematch of last year’s ACC Tournament Championship.