The Riverhounds SC and the New Mexico United, two teams that came into their inter-conference match-up with 33 points apiece, both in fourth place in their respective conference standings played to a hard-fought draw in the first meeting ever between the sides at Isotopes Park in Albuquerque, NM, on Saturday night.

The United’s Jerome Keisewetter scored in the the first minute of the match, taking advantage of a Hounds giveaway.  The Hounds responded in the second half when Dane Kelly broke out of his goal scoring drought, to come off the bench to deliver the equalizer in the 75th minute.

In the first minute of the match, Hounds defender Shane Wiedt played a ball right back to the United, which turned into a quick three-on-one break into the final third.

Former Hound Neco Brett spotted Keisewetter breaking into the box, and the New Mexico forward had an easy finish.

The Hounds were held in check until a pair of subs helped spark the effort to get the game’s tying goal.  Angelo Kelly-Rosales connected with Russell Cicerone to get the ball into the edge of the box. From there, Cicerone laid a perfect through ball that caught Dane Kelly in stride.  The USL Championship’s all-time leading goal scorer took a clever touch to beat his defender and goalkeeper Alex Timbakis for the goal.

It was the first-ever meeting between the teams, and the Hounds notched a point in the standings battling 98-degree heat and at 5,100 feet above sea level — the highest elevation for a match in team history.

The biggest moment of the half occurred just 51 seconds into the match, when former Hounds striker Neco Brett intercepted a pass out of the Hounds defense from Shane Wiedt.

Brett quickly spotted Kiesewetter moving down the right side and sent his strike partner toward goal with a through pass. Kiesewetter was on target with his low shot to the left corner, putting the hosts ahead.

The Hounds thought they had pulled even in the 21st minute when Russell Cicerone put away the rebound of a long-range shot by Danny Griffin, but the offside flag was raised against Cicerone.

Six minutes later, Alex Dixon got behind the defense down the right side, but with no options for a pass, he elected for a sharp-angled shot that skimmed across the face of goal and wide.

New Mexico nearly pulled further ahead in the 60th minute after a good team move forward that ended with Josh Suggs hitting the top of the crossbar from the left side of the box. Moments later, Hounds coach Bob Lilley went to his bench; he made four changes in the next 10 minutes, including introducing Kelly in the 62nd minute.

The moves paid off, as another substitute, Angelo Kelly, fed a pass forward to Cicerone, who deftly redirected the ball behind the New Mexico defense to hit Dane Kelly in stride for a one-touch finish. The 75th-minute goal was Dane Kelly’s seventh of the season and ended a 10-match scoring drought for the USL Championship’s all-time leading scorer.

Cicerone nearly gave the Hounds the lead two minutes later by pouncing on a New Mexico turnover on the bumpy infield dirt, but his shot was saved by onrushing goalkeeper Alex Tambakis.

Stoppage time saw each team get one final chance, as a volley by Sam Hamilton missed narrowly wide for New Mexico, and a late Dane Kelly header of a Marc Ybarra free kick was equally close for the Hounds. 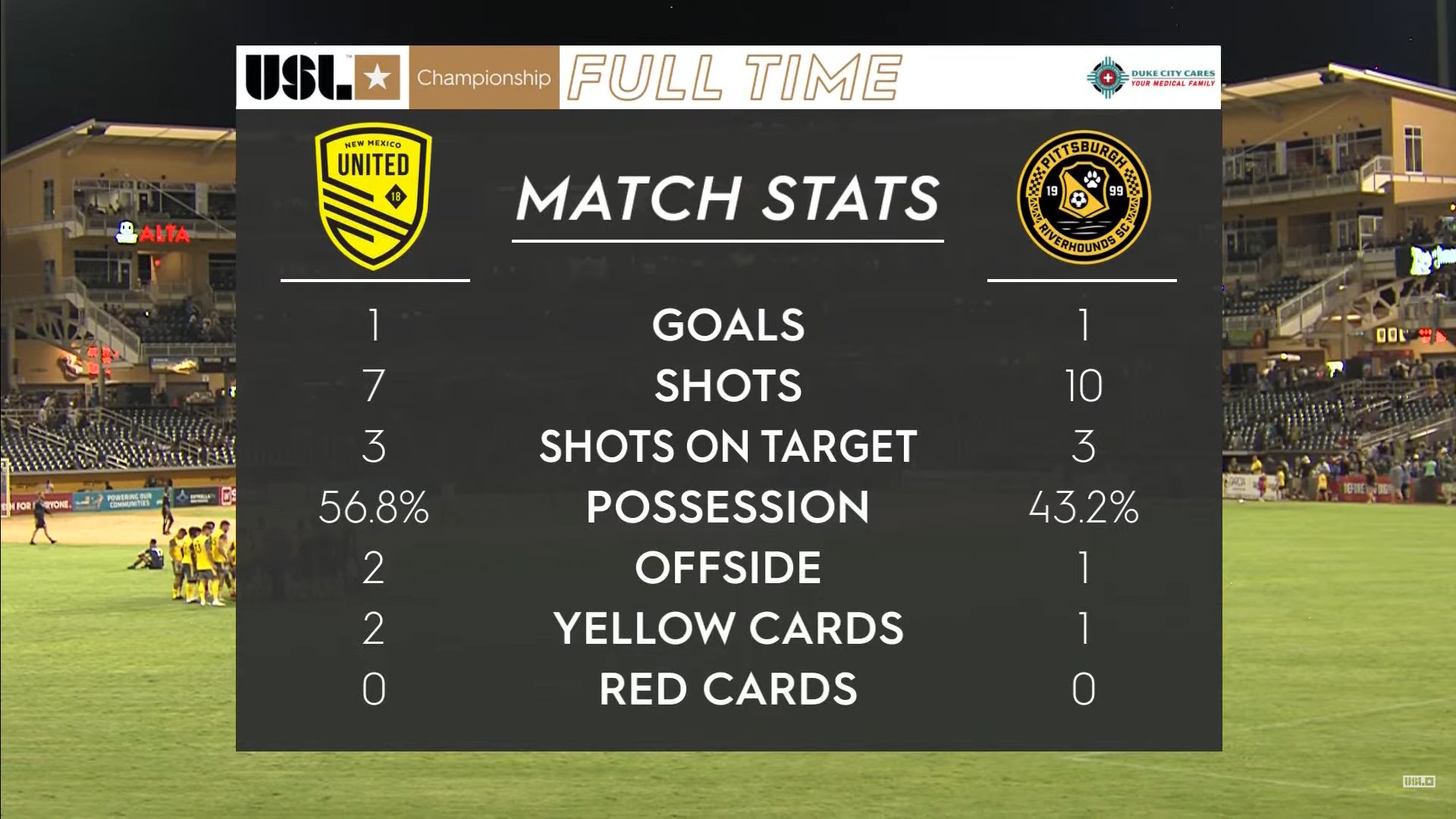 Shared points between the teams that entered the day in fourth place in their respective conferences, but #HOUNDTAHN might be disappointed not to have grabbed a winner. #NMvPIT https://t.co/2HTVTkHoi1

The Hounds remain on the road to complete their final set of back-to-back away matches when they visit Hartford Athletic at 7 p.m. Saturday, July 23, at Dillon Stadium in the Connecticut capital. Hartford (4-11-4) dropped a 3-1 match earlier tonight at the Charleston Battery. Final – Riverhounds and NM United draw 1-1. Kiesewetter and Dane Kelly are the goal scorers. Over 12,000 in attendance in Albuquerque on a hot day, very impressive. Post game video with John Krysinsky to be posted later.

90′ – 4 minutes of stoppage time added. Going to be a grind till the finish.

84′ – Preston Tabort Etaka comes on for New Mexico. Rashid Tettah subs off. Luke Biasi for the Hounds replaces Nathan Dossantos as it looks like he cramped up. Both teams looking tired.

75′ – WHAT A PLAY! Dane Kelly the super sub scores his 106th goal in the USL and 7th of the season. Cicerone checks in and makes a beautiful flick into space, Kelly runs on and taps it past the keeper. 1-1 game!

69′ – Riverhounds make two more subs. Ybarra and Mekeil Williams on for Wiedt and Peters. Harry Swartz and Neco Brett off for New Mexico. Sergio Rivas and Daniel Bruce are on.

62′ – Harry Swartz on New Mexico now given a yellow card for a late tackle on Forbes.

61′ – Angelo Kelly Rosales and Dane Kelly subbed on. Dikwa and Rovira subbed off.

60′ – Another bad turnover by the Hounds defense and Suggs hits the crossbar. Not the start I expected from Pittsburgh this half.

57′ – Dossantos gets a yellow card. Definitely a sign of frustration.

55′ – There’s been at least 5 goal kicks for the Hounds 10 minutes into this second half. Struggling to hold the ball up top.

45′ – Start of the second half begins now. No subs that I see out there.

Half – Hounds down 1-0 after 45 minutes. A few bad turnovers and a lack of possession but a few good scoring chances. I’d bet we see super sub Dane Kelly come on the pitch soon.

30′ – Both teams getting a hydration break. It’s 99 degrees in Albuquerque. Pittsburgh players definitely not used to this kind of heat.

22′ – Goal for Hounds but called offsides!! A brilliant step over move and shot by Griffin. Tambakis had to really dive over and make the save. Cicerone tapped it in but offsides.

16′ – Peters and Waite collide on a cross. Peters is down in some pain.

6′ – Will Seymour with some great dribbling on the attack. New Mexico with another chance in the box. Not the start the Hounds were looking for tonight.

2′ – Terrible giveaway by Wiedt and just like that, New Mexico is up 1-0. Kiesewetter scores for United.

Look for starting lineups, in-game highlights and post match recap and reaction to be posted here. 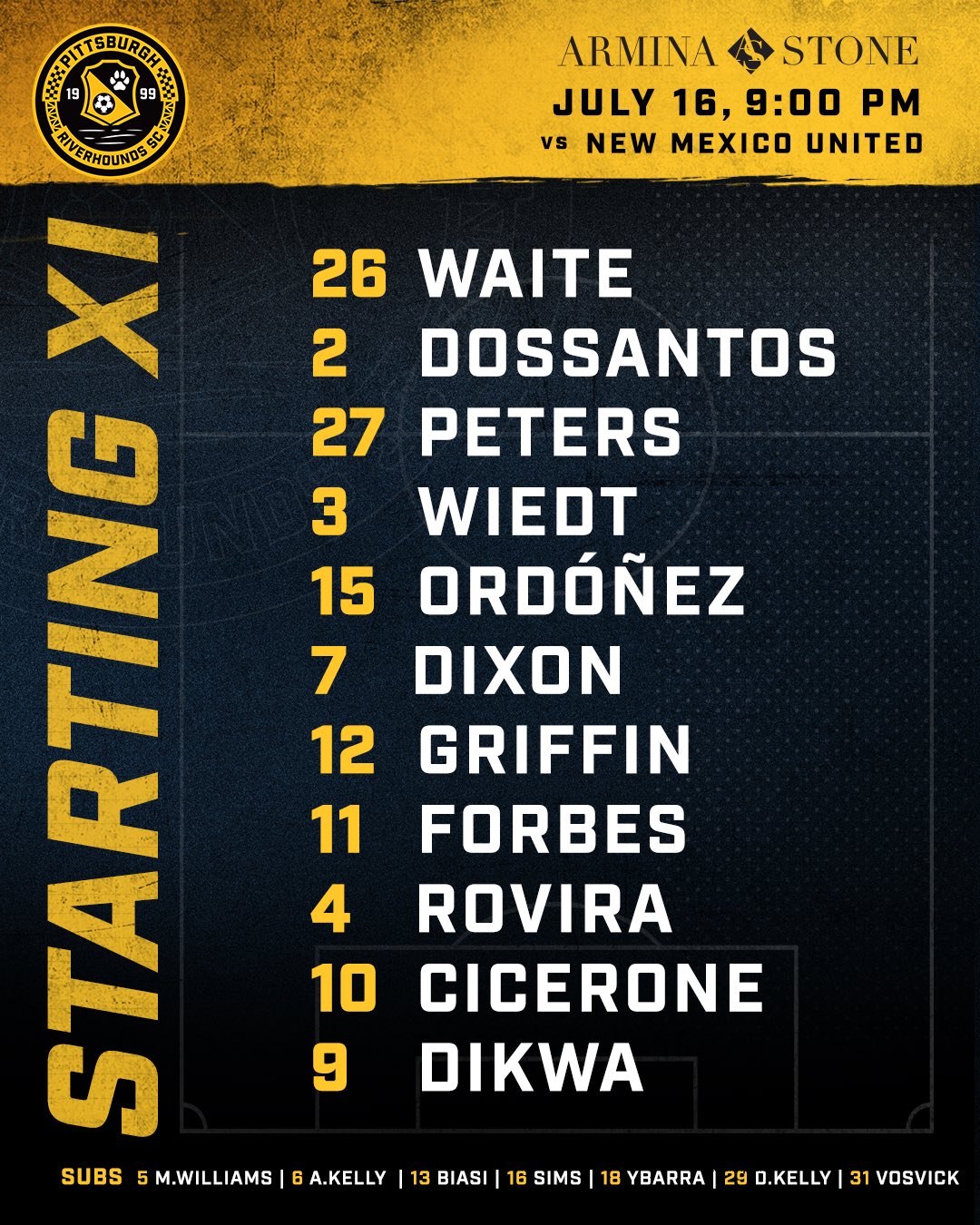 It was earlier in the week, but while the Hounds were adding Edward Kizza to the roster, NM added Romario Williams, a proven scorer in the USLC.

The 27yo forward and Jamaican international already has 53 career goals to his name, with plenty more to add. Welcome to New Mexico Romario! #SomosUnidos pic.twitter.com/3l7VSnzCP8

After back-to-back home wins and three straight victories overall, the Hounds are back on the road to face New Mexico United for the first time at the high altitude of Isotopes Park in Albuquerque, N.M.

This will be a meeting of two teams that are in very similar position at this point in the 2022 season.  They both sit in fourth place in their respective conferences with 33 points.

The Hounds are traveling to the state of New Mexico for the first time and will take the field for their first game in the Mountain Time Zone since 2014 but it is the team’s second Western Conference road trip of the season, having already played in Las Vegas back in April. With three important points on the line, the Hounds turn to the momentum from their last three victories in hopes of finding more success tonight.

Contribution from up and down the Hounds’ roster has allowed the team to come away with these victories. Defender Jelani Peters is coming off his first career two-goal game and a Team of the Week selection after scoring only once last season. Kenardo Forbes continues to rack up assists and is entering tonight’s game with a career total of 52 after two against Miami, putting him into a tie for the USL Championship lead with seven. The Hounds’ leading goal scorer, Russell Cicerone, has six goals and two assists in his last 10 games for a season total of eight goals.

In their last three games, the Hounds have only allowed one goal, and that came in stoppage time of the 4-1 win last Saturday over Miami FC. A strong defense will be needed in what could be a low-scoring affair with New Mexico, which only has one loss in its last 12 games and has not allowed three goals in a game yet this season.

Tonight marks New Mexico’s fifth match in 14 days, and in that stretch, the team has two wins and two draws. Justin Portillo holds the lead for most goals with six for United, including the game-winning penalty Wednesday in a 2-1 win over Tulsa, while Daniel Bruce leads in assists with four.

The Hounds are reuniting with New Mexico’s Neco Brett, who led the Hounds in scoring in each of Bob Lilley’s first two seasons as head coach. Brett’s 34 goals in all competitions with the Hounds is the second-most in team history, but tonight, the Hounds hope to shut down United’s striker and come away with a win.

The Hounds continue to make new acquaintances as they travel to visit New Mexico United for the first time. This is the Hounds’ sixth first-time USL Championship opponent this season, with the seventh and final new foe — Oakland Roots SC — scheduled for the final day of the season.