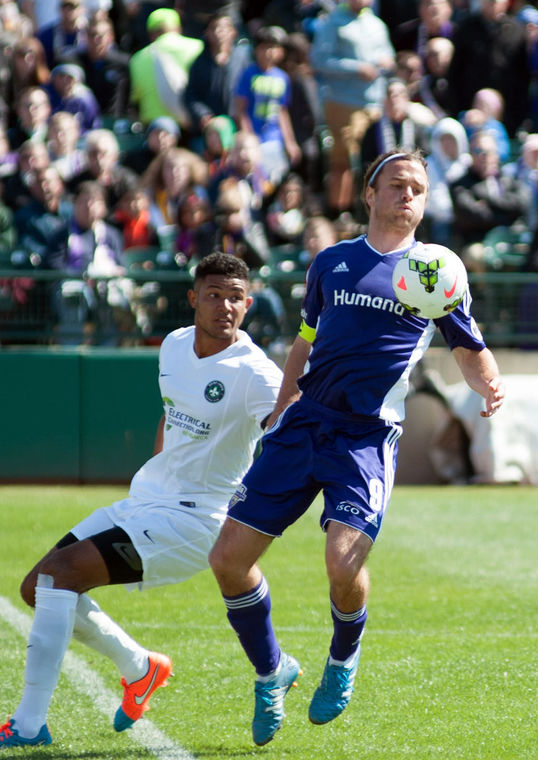 Matt Fondy tallied his first assist of 2015 on Thursday against Rochester.

Last game: played to a 1-1 draw on Thursday, against Rochester Rhinos, the only team to beat the Riverhounds this year. Louisville currently sits in third place with five points from a 1-0-2 start, just behind Rochester and the undefeated Charleston Battery.
Hounds Storylines:
The Hounds (1-1-1, 4 points) had a very good second half showing — coming back from a 1-0 deficit on the road — in St. Louis last Saturday.  After making some key adjustments, getting a strong goalkeeping performance from Ryan Thompson and Brazilian forward Vini Dantas scored his first goal for the club — they salvaged a point in their first road game of the season.  A win can push the Hounds right into the mix, near the top line of the USL’s Eastern Conference standings.
Injury Report — The Riverhounds have some injury concerns leading into the weekend. Dantas tweaked a hip flexor at Saint Louis while defender Fejiro Okiomah strained quad muscle. As of now, reports have both players likely to be penciled in the Hounds lineup on Sunday.  Max Touloute’s availability is less certain. The Haitian forward is struggling with a swollen left knee.  Matt Dallman and Drew Russell remain sidelined. Dallman is expected to resume full training next week.
New Player — Earlier this week, the Riverhounds made the signing of Guinean forward Amara Soumah official. There’s a good chance that Soumah will be on the 18-man game day selection. Soumah started for the Hounds in the recent scrimmage wins over the University of Pittsburgh and Saint Francis University.

What to Expect from Louisville FC
They’re basically the remnants of the old USL Orlando City empire — who have awakened as a dangerous threat to the rest of the USL in Louisville this season.  They wear the same colors (sharp purple and gold combination with an alternative red jersey).
Rookie coach James O’Connor,  a former Orlando City player who also had a stint with English team Stoke City, has put together a pretty formidable team that plays their home games at Slugger Field, the long time home of the Louisville Bats AAA Baseball affiliate of the Cincinnati Reds.  The Field sits in the backdrop of the Louisville skyline, on the banks of the Ohio River – for soccer sightlines sits 8,000.  LCFC supporters by the way — founded in 2013 — are known as the Coopers — taking their name from Louisville’s bourbon distilling tradition, where coopers made barrels that were used to age bourbon and give it a distinct flavor.
In three games so far, LCFC only conceded two goals — and goalkeeper Scott Goodman’s been solid in facing limited pressure with nine saves overall.
Louisville’s main catalyst appears to be midfielder Matt Fondy.
Fondy is the team captain — and comes to Louisville with MLS experience with both Chicago and Chivas. In the first three games, although he hasn’t scored a goal yet, he’s already had an impact, and he’ll be a guy that the Hounds will have to keep a close eye on and be marking throughout the match on Sunday.
On Thursday, Fondy set up Juan Guzman for the go-ahead goal early against Rochester. Guzman has been LCFC’s leading scorer with a goal, and two assists. Magnus Rasmussen is another key player, who scored the first goal for Louisville in the opener vs St. Louis.
A strong midfield and back line led by strong MLS prospects like Bryan Burke and Connor Shanosky have been instrumental in keeping opponents so far from creating a lot of scoring chances.
This will be a tough challenge for Mark Steffens and his Riverhounds club that has been inconsistent so far in the first half, but have had three strong second half performances.
“There is a lot of height and strength on the Louisville team as well as midfield creativity,” said Riverhounds head coach Mark Steffens.
“Hopefully we’ve put together an effective plan to overcome them.”
Last Word

Highmark Stadium was used for Pitt Blue-Gold Game on Saturday.  Which is a nice thing for the Riverhounds (exposure) and Highmark Stadium (more revenue $$$$$).
But to the soccer purists (yeah, yeah — snobs, elitists, etc. ) — that means potential football lines still being on the field for the match.  That might cause a big panic among those of us who love the World’s game.  We’ll see come game time if this is or not the case.   But either way, it’s a nice thing to see the place packed and Pitt fans can have an intimate venue for their annual spring game.
The real question, will the weather hold off Sunday?   (expecting rain and possible thundershowers in forecast late afternoon).  Last year there had to be about six bad weather/rain delays during the Riverhounds season.   Now, will the Riverhounds entertainment staff be prepared to have another classic all-rain weather delay song mix ready to go?
If so, I am putting my request in now for “November Rain.”