“We played a quality opponent who pushed us and stayed in the game until the very end,” said head coach Jay Vidovich. “Our guys still have room to grow and we are going to continue to mature, but I think this was a really great growth moment for us. It didn’t go right for us at the end of regulation but they found a way to win it.”

Noel scored the first goal of the contest just three minutes in, as the Niort, France, native took a ricochet off an Ordoñez shot from the post and volleyed in the score. The goal was the second-straight contest a Panther has scored in the third minute of the game.

At the 27:56 mark, Noel again found the back of the net with help from graduate student Jasper Löeffelsend. Löeffelsend crossed the ball in from right to left to Noel, who gathered a fortunate bounce off a Cavalier defender and found the left side of the net to put the Panthers up 2-0.

The score remained the same at half, with Pitt totaling a 10-2 shot advantage after 45 minutes.

Virginia pressured the 18-yard box heavily in the second half, and in the 66th minute, scored its first goal off the foot of Kaya Ignacio. The Panthers kept Virginia at bay until the closing minute of the contest, as Nick Berghold knotted the game up at two with just 49 seconds to spare in regulation. Ignacio passed it off to Berghold with his back heel and Berghold took two dribbles to his right and found the left side of the goal for the equalizer.

The Cavaliers outshot the Panthers, 9-4, in the second half and entered overtime with a 6-3 advantage in corners.

Pitt, who defeated Syracuse 3-2 in double overtime on Oct. 6, quickly maneuvered the ball into Virginia territory. Senior Matt Bailey, who came on late as a substitute, forced a Pitt corner, deflecting the ball off a Cavalier defender. Crivello took the corner and found Ordoñez from eight yards out, who headed it in to the right side of the net. The game-winner was the second overtime victory for the Panthers this season and third game-winning goal of the year.

“It was a team effort,” said Vidovich. “Matt Bailey coming in off the bench made a tremendous difference for us who helped earn that corner kick that got us the win. Big moment for us and we took advantage of it.”

Pitt stays on the road for its final road contest of the fall Friday, Oct. 23 at Louisville. Kick-off is slated for 7 PM on the ACCNX.

Arturo for the win 🤫

A header from the second corner kick during a sequence early in the first OT!  We’ll have the summary later here on this thread.

Let's plays some FREE soccer here at Klöckner thanks to some late game heroics from Nick Berghold!!! #GoHoos

90′ | GOAL UVA with the equalizer with just 43 seconds left.

83′ | Things getting very physical — little scuffle between the two sides after Pitt player goes down.

62′ | UVA best chances coming on set pieces. Last free kick — nice diversion to play ball wide with most Pitt defenders in box, but cross in is cleared away. 62′

60′ | Pitt with 11 shots, including four shots on goal as we approach the 60th minute of the game.

Here are the highlights of Noel’s two goals…

4️⃣ goals in his last two games, including two tonight!

43′ | Now, Pitt’s hitting UVA on the counter — great chance again for Noel to get the hat trick after long cross over to back side of box. His one-time shot bounces on frame — but saved by UVA keeper Colin Shutler.
2-0 Pitt

Ball gets through — and it's Valentin Noel with the early brace! Pass came in from Jasper Loeffelsend.
Pitt's early high press is paying serious dividends.
23'
Pitt 2-0 over UVA#ACCSoccer

Valentin Noel picks up right where he left off from last game, scoring off a ricochet from the post.

Here are the starting lineups. 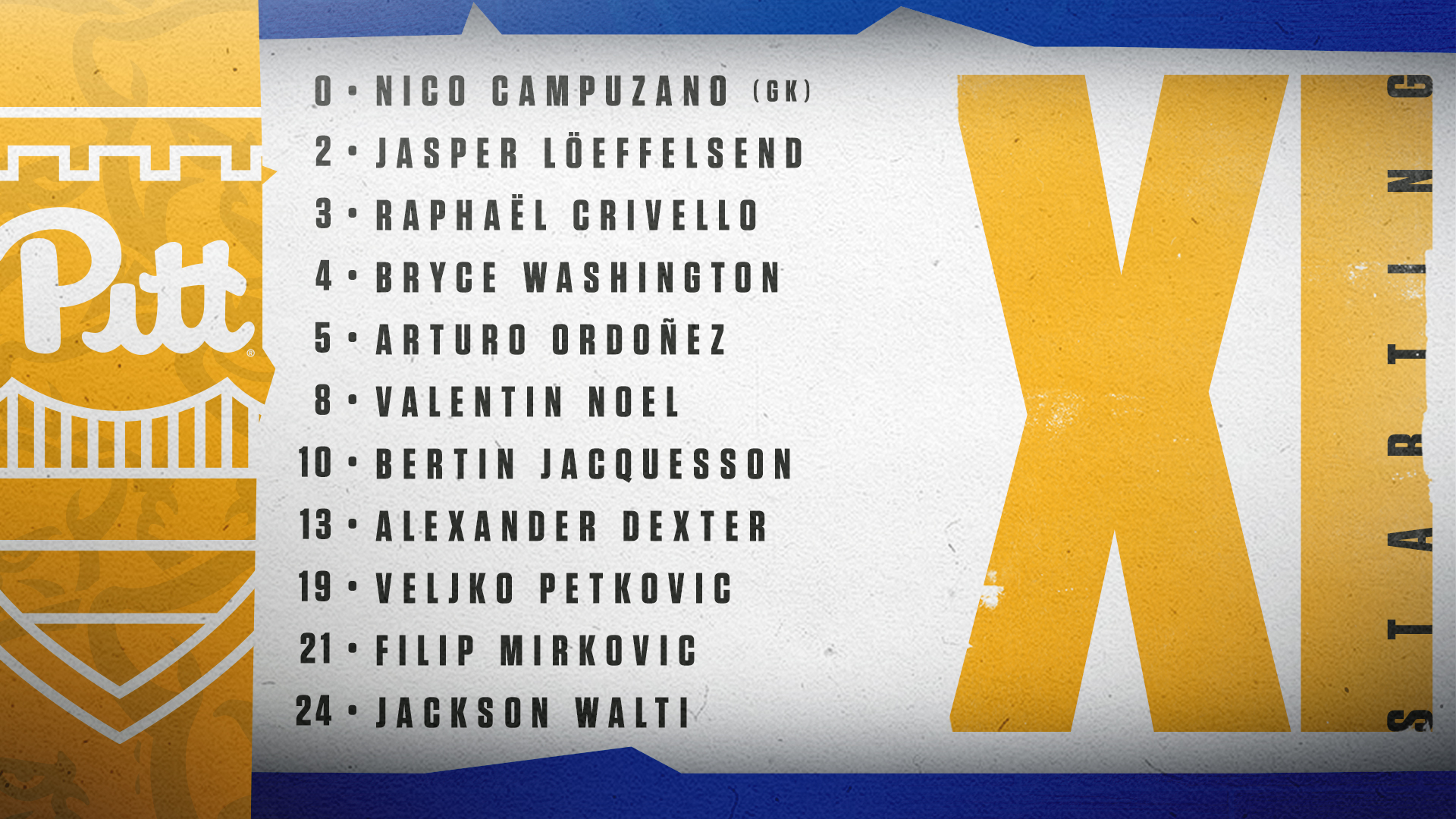 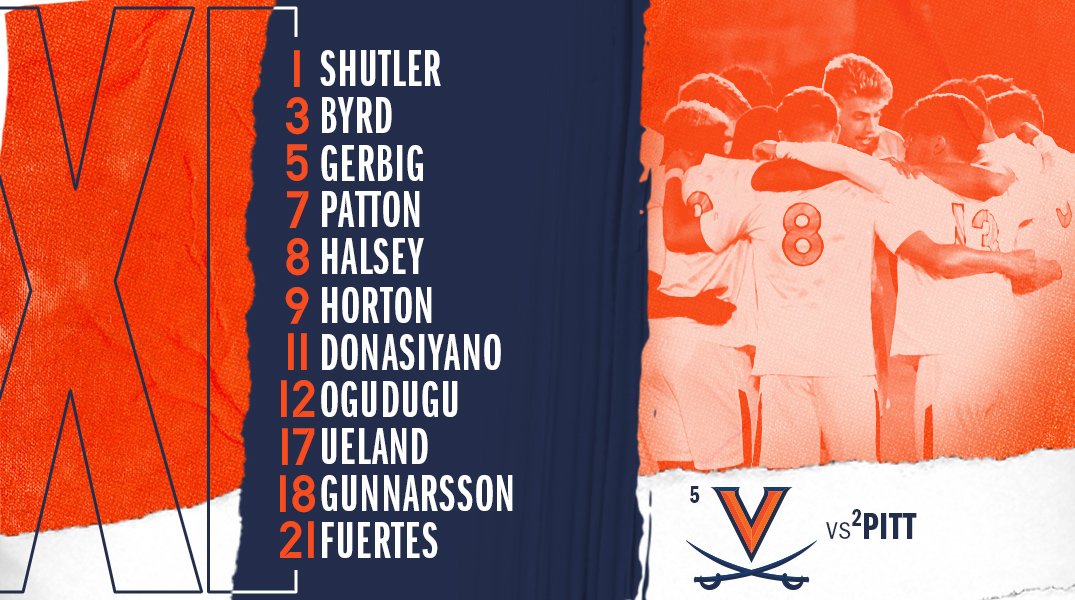 With Clemson’s 2-1 win vs No. 1 Wake Forest, with a win on Sunday night, Pitt could conceivably move up to number one in the United Soccer Coaches rankings.

–          Sophomore Valentin Noel scored twice, including a goal in the 87th minute to seal the deal for the second-ranked Panthers.

–          Graduate student goalkeeper Nico Campuzano recorded a career-high six saves. Campuzano has 11 on the season, good for sixth in country and second in the ACC.

–          The Frenchman has totaled three points in each of his first three games, with highlighted moments including a goal at both Notre Dame and Syracuse and three assists at home vs. Virginia Tech.

–          With an assist at Syracuse on Oct. 6, senior Alexander Dexter is now tied for second in program history with 14 career assists.

–          The Panthers have won the last two meetings against the Cavaliers, most recently on the road Oct. 18, 2019. Virginia was ranked No. 1 in the country, and the 2-0 victory was the first time the Panthers defeated the number one team in program history.

–          Graduate Student Joan Gilbert leads the team in points with three, as he scored the lone goal against the Hokies and tallied an assist vs. Louisville.

–          Goalkeeper Colin Shutler has proved to be a top GK so far this season, recording 12 saves and a .857 save percentage. His eight save performance against Louisville earned him Co-Defensive Player of the Week honors by the ACC.

–          Sophomore midfielder Veljko Petkovic was named ACC Offensive Player of the Week on Oct. 12 for his showing at Syracuse and at home against Virginia Tech.

–          The Nis, Serbia, native scored three goals and tallied an assist for the week, including scoring twice vs. the Orange.

–          Petkovic joins teammates Bertin Jacquesson and Arturo Ordoñez on being named ACC Player of the Week. Both Jacquesson and Ordoñez were named Co-Offensive and Defensive players, respectively, on Sept. 28.

–          Freshman Bertin Jacquesson was recognized by TopDrawerSoccer on Oct. 13, earning Player of the Week for his performances against Syracuse and Virginia Tech.

–          Sophomore Veljko Petkovic was also named to the Team of the Week, while classmate Valentin Noel earned Honorable Mention honors.

–          The TopDrawerSoccer Team of the Week nod is Jacquesson’s second this season, as he was recognized on Sept. 26. Both graduate student goalkeeper Nico Campuzano and senior forward Alexander Dexter were also honored on Sept. 26.

–          The Panthers stay on the road and visit Louisville Friday, Oct. 23 for their last away contest of the regular season.

Second half surge thrusts Pitt women to 2-0 win vs Miami on Senior Day
Number One! Pitt ascends to the top of United Soccer Coaches poll for first time in program history