Alex Dixon’s header in the 90th minute stole a point for Pittsburgh Riverhounds SC, as the first meeting between the Hounds and San Antonio FC ended in a 1-1 draw Saturday night at Toyota Field in San Antonio, Texas.

Dixon, a native of Bay City, Texas, just outside of Houston, made a back post run and got on the end of a Louis Pérez pass from the left flank to score his eighth goal of the season for the Hounds (13-6-5) in the game’s final moments.

San Antonio (8-5-7) took the lead in the 64th minute on a header by leading scorer Nathan, but the hosts were unable to do more with a 10-3 edge in shots for the game.

The start of the match looked like a game between two teams who have never met, as both teams took a cautious, conservative approach.

The Hounds elected to rest a handful of players at the start of the game, opening the door for 17-year-old USL Academy contract signee Wyatt Borso to make his first career start and play 45 minutes before being replaced at the break by Russell Cicerone.

Chances were scarce in the first half, as San Antonio’s only shot on goal was a poked attempt in traffic from a corner kick, while the Hounds didn’t record a shot on goal until Pérez put one on target in the final minute.

San Antonio winger Jose Gallegos was their most dangerous player for much of the match, and he drew a penalty kick in the 48th minute when Shane Wiedt was called for handling a cross as he scrambled to defend.

Nathan stepped up for the spot kick, but the Brazilian striker fired the ball over the crossbar to keep the match scoreless.

Nathan made amends in the 64th minute, when Marcus Epps sent a diagonal cross in from atop the penalty area, and the San Antonio finisher beat Hounds goalkeeper Jake Leeker at the back post with his header.

The Hounds continued to bring in attacking players, as halftime substitutes Dixon, Cicerone and Kenardo Forbes were joined in the 72nd minute by Tommy Williamson. Forbes then initiated the decisive play by carrying the ball toward goal before finding Pérez to his left, and Pérez placed the cross perfectly for Dixon’s game-tying header that went back across the face of goal. 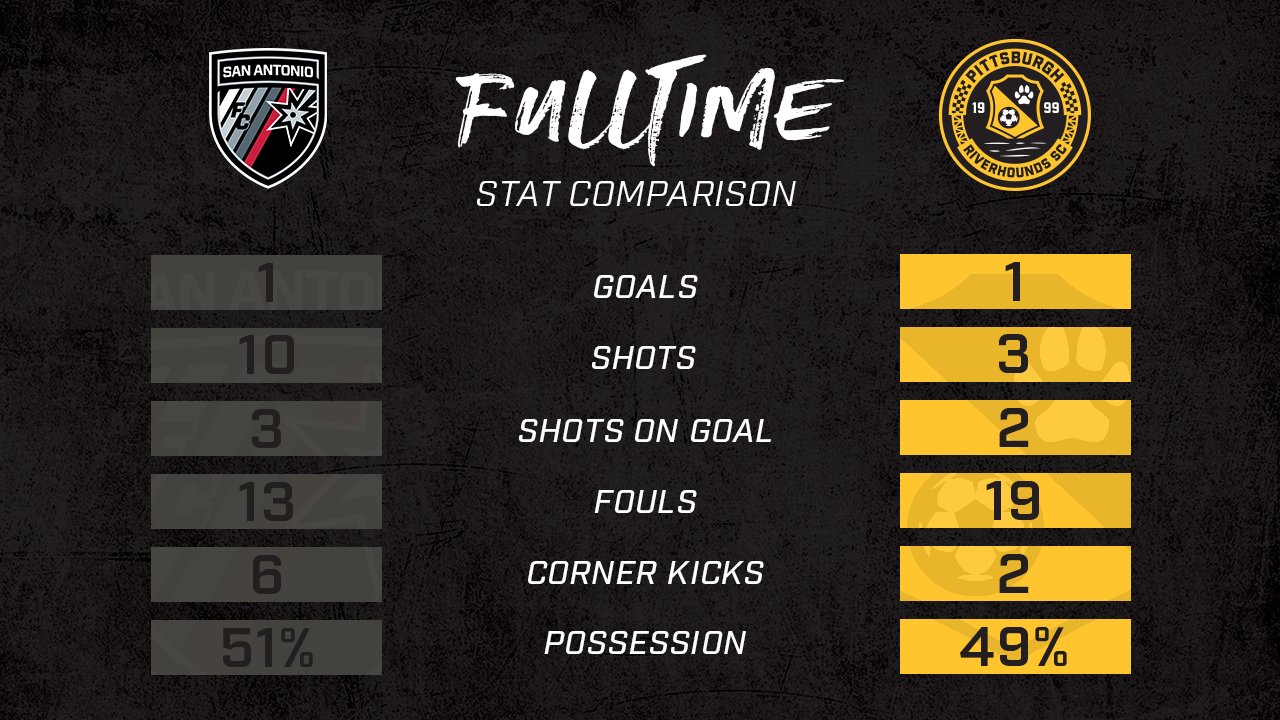 The Hounds settle in for the final quarter of their season with one divisional game each of the next eight weekends.

Up first is the final meeting of the year with Loudoun United (3-15-2), which got a road draw Saturday at Rio Grande Valley FC. The teams meet for the fourth time Sept. 11 at 7 p.m. at Highmark Stadium.  Pittsburgh Soccer Now will have full coverage of that match.