If Pitt men’s soccer team had its way, they’d probably play every home match against a top-five ranked team.

The No. 13 Panthers controlled play throughout, overcoming an early 1-0 deficit, then hung on after playing down a man in the late moments to defeat No. 3 Duke, 3-2, at Ambrose Urbanic Field on Saturday night.

“It was a tremendous effort by the guys tonight,” Pitt Head Coach Jay Vidovich said. “I thought it was great we didn’t panic after the first half and we kept pushing. The guys responded well with resiliency tonight.”

Leading the way for Pitt, sophomore midfielder Filip Mirkovic scored a pair of goals emanating from shots outside the box and Bertin Jacquesson delivered a late-game tally as all three assists came from its breakout star in the making, Guilherme Feitosa.

With the win, Pitt (8-3, 4-1 in ACC) won its 16th straight home match and more importantly, overtakes Duke for the top spot (based on head-to-head tiebreaker) in the ACC’s Coastal Division standings, as both teams now have identical conference records (good for 12 points).

The Panthers have now beaten three top-5 ranked teams in the past four weeks, having also topped Clemson and North Carolina previously. The North Carolina and Duke wins have come at Ambrose Urbanic Field.

Pitt opened up the match putting immediate pressure on Duke, when Bertin Jacquesson made a deep advance after kickoff, only to be denied by goalkeeper Eliot Hamill from making a shot or short cross.

The Panthers never really let up, but couldn’t solve Duke for most of the first half.

Despite a huge advantage in possession (more than 60 percent), shots (13-3, 7-1 on target) and corners (5-1) in the first half, the Panthers found themselves trailing after 28 minutes.

Duke took advantage of its first corner attempt of the match when the ACC’s leading scorer, Thor Ulfarssonmade a great effort to rise above the crowded box with a well-timed effort to get to a second ball played back to the near post.

The Panthers stayed the course, continuing to push forward as they were using the width and space Duke gave them with Jasper Loeffelsend, Bertin Jacquesson and Guilherme Feitosa along with sub Alexander Dexter sending in numerous cross attempts and setting up a handful of corners.

Pitt finally capitalized in the 40th minute when Feitosa received a ball in the center of the box after a decent build-up that ended with a Dexter pass. Feitosa then played the ball back to Mirkovic, who ripped a low shot that found its way into the back of the left side of the net from 25 yards.

Keeping the same level of play up in the second half, the Panthers benefited from another Feitosa-Mirkovic connection.

This time, Mirkovic had some help with a deflection in the 53rd minute that gave the Panthers a 2-1 lead.

Pitt’s Jasper Loeffelsend was sent off in the 85th minute — forcing the Panthers to play down a man for the remaining moments of the match.

After fighting off a Duke corner attempt, the Panthers found another goal when Feitosa found Jacquesson in stride on the right side.  The Frenchman delivered the finish from outside the box to give Pitt a 3-1 lead.

Duke would score a late goal in the 89th minute, as Peter Stroud’s shot deflected a few times, then found its way past Pitt keeper Nico Campuzano.

Despite the late Blue Devils goal which made things interesting, the Panthers would hold on for the win when Campuzano held on to the ball on Duke’s last ditch cross in the final seconds of the match.

Look for more recap and reaction here on PSN!

The Feitosa 🤝 Mirkovic connection is on tonight.

A rocket of a goal 🚀

Mirkovic's pass from Feitosa was the equalizer in the first half.

The Panthers hang on. The last play of the match, Duke sends a cross into the box, but Nico Campuzano is there to grab it.

Peter Stroud — shot deflected along way in box but goes in!

Bertin Jacquesson buries it on the counter from tough angle and just outside box.
It’s a HAT TRICK ASSIST night for Guilherme Feitosa
Pitt now

84′ – Second Yellow to Pitt’s Jasper Loeffellsend! The Panthers leading assist man is sent off for another hard challnege at midfield. Pitt will be down a man for final 7 minutes of regulation holding on to 2-1 lead vs Duke.

66′ — Duke’s Nick Pariano loses his composure — and starts pushing and shoving with a few Pitt players after a hard foul. Officials now reviewing what transpired. Both teams over to their benches.

It’s a brace for Filip Mirkovic

Again the assist comes from Feitosa.

This time another low shot from 24 yards is deflected and finds its way past Duke’s GK Eliot Hamill.
Panthers now lead Duke, 2-1

Pitt’s depth being put to the test… Not so good news for Pitt, is they start the second half with Arturo Ordonez out of the line-up. Seldom used Lucas Matuszewski is now in there at center back paired with Mohammad Abdulnadi.

itt’s been the better side, but Duke has shown they can defend well under pressure and they have a legit scorer. Should be a great second half. 1st place in ACC Coastal Division on the line.

44′ — What a diagonal ball from Jackson Walti catching Alexander Dexter in stride on left side — gets behind Duke defender, but right footed shot attempt just inside box is saved by Hamill, who comes off his line.

Filip Mirkovic with a turf-burner from 19 yards!
Feitosa with back to goal plays it back to Mirkovic who nails the equalizer.

Duke brings a handful of subs (Kelly, Taylor, Barajas), but Pitt’s Alexander Dexter now also coming in for Rodrigo Almeida. Feitosa now slides into the middle, and Jacquesson over to the right wing.

28′ — Pitt’s Loeffelsend brings the crowd to its feet as he gets into the box with a few moves and flashes forward, but his shot sails about four feet over the bar.

For all of Pitt’s attempts and chances in a crowded box, it was Duke who had a player who made a dynamite effort to get to ball and put it through.

Pitt couldn’t clear the corner attempt. Should have never been a corner, but Abdulnadi headed a ball away over the end line instead of clearing it to the side. 23′

20′ — Unbelieveable ball — so well timed — from Feitosa coming forward on right to Jacquesson in the box. It’s a laser shot but close enough for Hamill to handle.

18′ — Duke’s Santa Ihara with a blast from outside the box but it goes well over the bar.

15 – 16 ‘ — Pitt with consecutive corners. Two great saves by Hamill and another by Duke defender on the line saving a Raphael Crivello shot.

9′ — My goodness Jasper Loeffelsend just undressed the Duke defender on right side to get into box, but his pass attempt to midde of box is block. The crowd loved it.

8′ — Feitosa with cross from right side forces Hamill to go down to punch it away. Mirkovic attempts shot from top of box but it’s blocked.

6′ — Free kick for Pitt. Feitosa job to pick off pass a midfield, Then earns the foul.  Free kick though, soft shot on frame. Easy save for Hamill.

Jacquesson gets all the way to end line but Duke keeper Hamill comes out to take away shot or cross attempt.

7:01 — A better look at Pitt’s tactical formation for tonight… 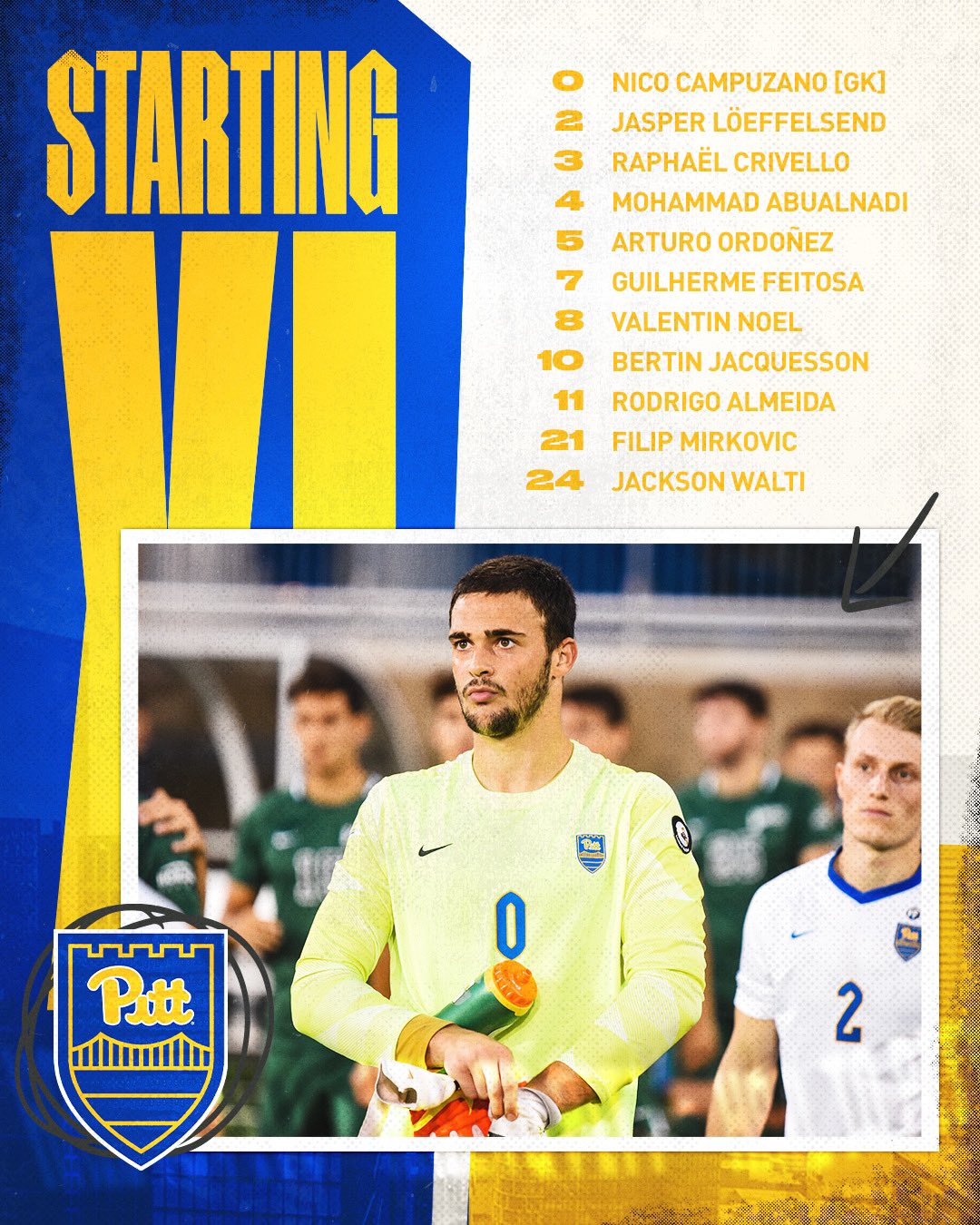 Sounding Off on Soccer: Hounds’ 2nd Half Collapses, plus more on Pitt men and women

–        Saturday’s match holds ACC Coastal first-place implications. Duke enters with 12 points to Pitt’s nine. A Pitt win will tie Duke at 12, but head-to-head record will give Pitt the lead in the division.

–        Senior goalkeeper Eliot Hamill enters with the best save percentage in the country, posting a .912 stoppage mark. His .367 goals against average is also third in the nation.

–        Sophomore Thorleifur Ulfarsson leads the conference – and is sixth in the country – in goals with eight. He’s also third in the ACC and 19th nationally in total points (16).

–        Duke’s goal differential is fifth-best in the nation, scoring 23 goals to allowing only three.

–        The Panthers enter Saturday with the longest home-winning streak in the ACC.

–        Pitt’s 15-straight matches won at Ambrose Urbanic Field is currently the most at any home venue in the conference. Clemson previously held that title with 31-straight wins at Historic Riggs Field before Pitt defeated them 2-0 Sept. 25.

–        Graduate student Jasper Löeffelsend (yas-pur Law-full-zend) finished the 2020-21 season as one of the best passers in the country and is keeping that status this season.

–        The defender recorded his first assist of the year at West Virginia and followed that match up with two at home vs. Lehigh.

–        Löeffelsend registered an assist against both North Carolina and Penn State before tallying two at home vs. Cleveland State.

PITT RANKED NO. 13 IN UPDATED POLL

–        Pitt tallied a season-high eight assists as a team and totaled 20 shots for the first time this year.