It all started when Hounds coach Bob Lilley almost had an assist retrieving ball that went out — helps get it back to one of his players for quick throw. After Hounds get ball into the box, forward Romeo Parkes goes down in pain– and then Richmond quickly counters — and Fernando is there to finish it off.

After Hounds knock it around a bit, Kenardo Forbes unleashes an absolute stinger right to center of goal but right at keeper in 60th minute.

Richmond with another counter chance on big field. This time Heviel Cordoves settles for shot from 22 yards — and misses to the left.

GOAL — Riverhounds. Neco Brett finishes with a header after nice cut-back pass from the end line from Kevin Kerr — who gets to long cross and redirects it back to center of the box.

Haven’t we seen this same thing before this year?

Moments after the goal, Kerr with a fantastic shot but Spengelberg with a diving save.

Parkes gets past the back line, overpowers Richmond’s Mikiel Willams to get to ball and toe-tap it after a terrific feed from Brett.

Three header attempts in the box in the first 12 minutes — and each one can’t connect.

Dan Lynd comes up big after Richmond gets close after three corner kicks in a two minute span.

Hounds with more crosses into the box in late stages of second half. This time it was Hugh Roberts missing his chance from Kevin Kerr corner.

Parkes on the end of a Jordan Dover cross — and guess what — his header misses the frame. 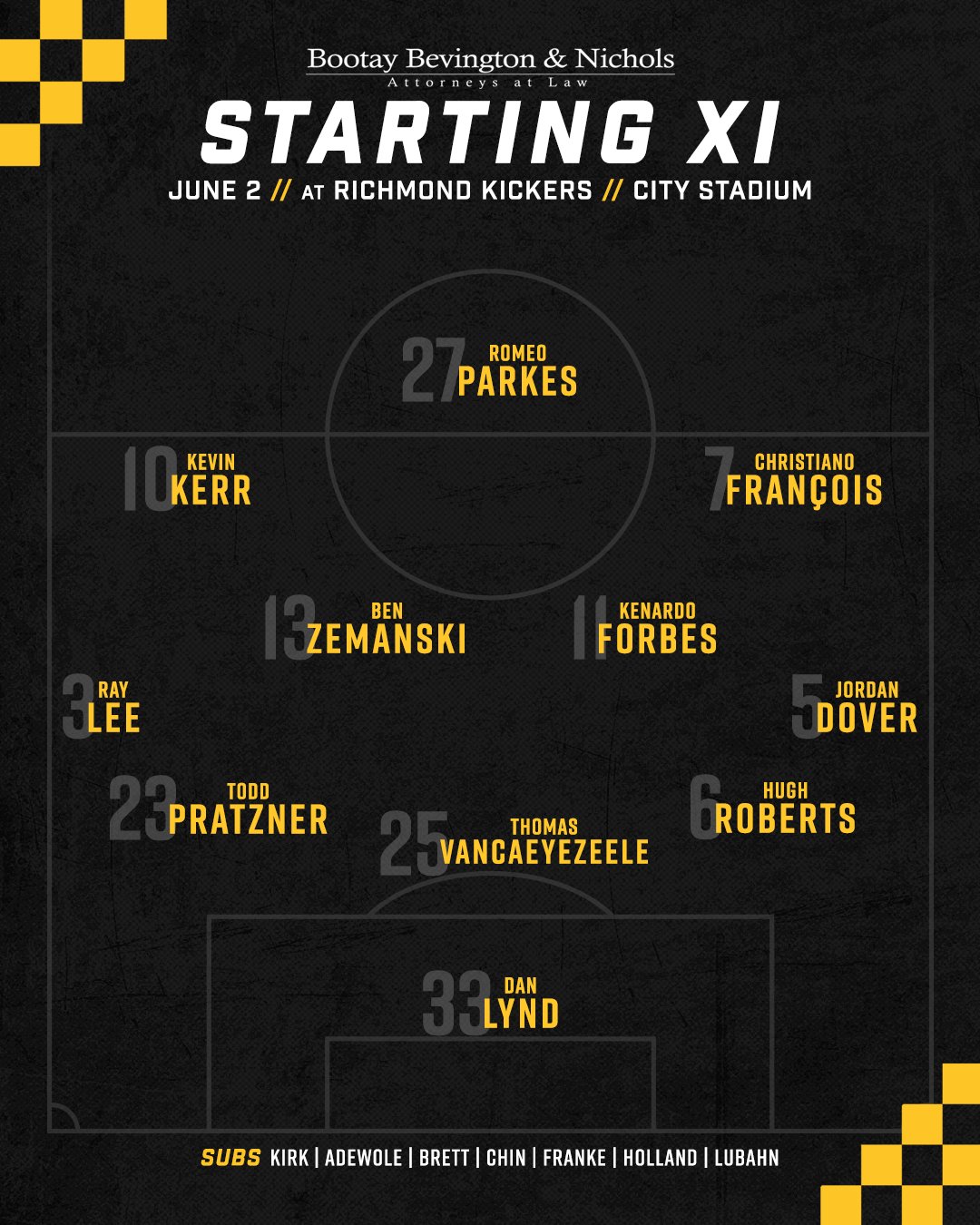 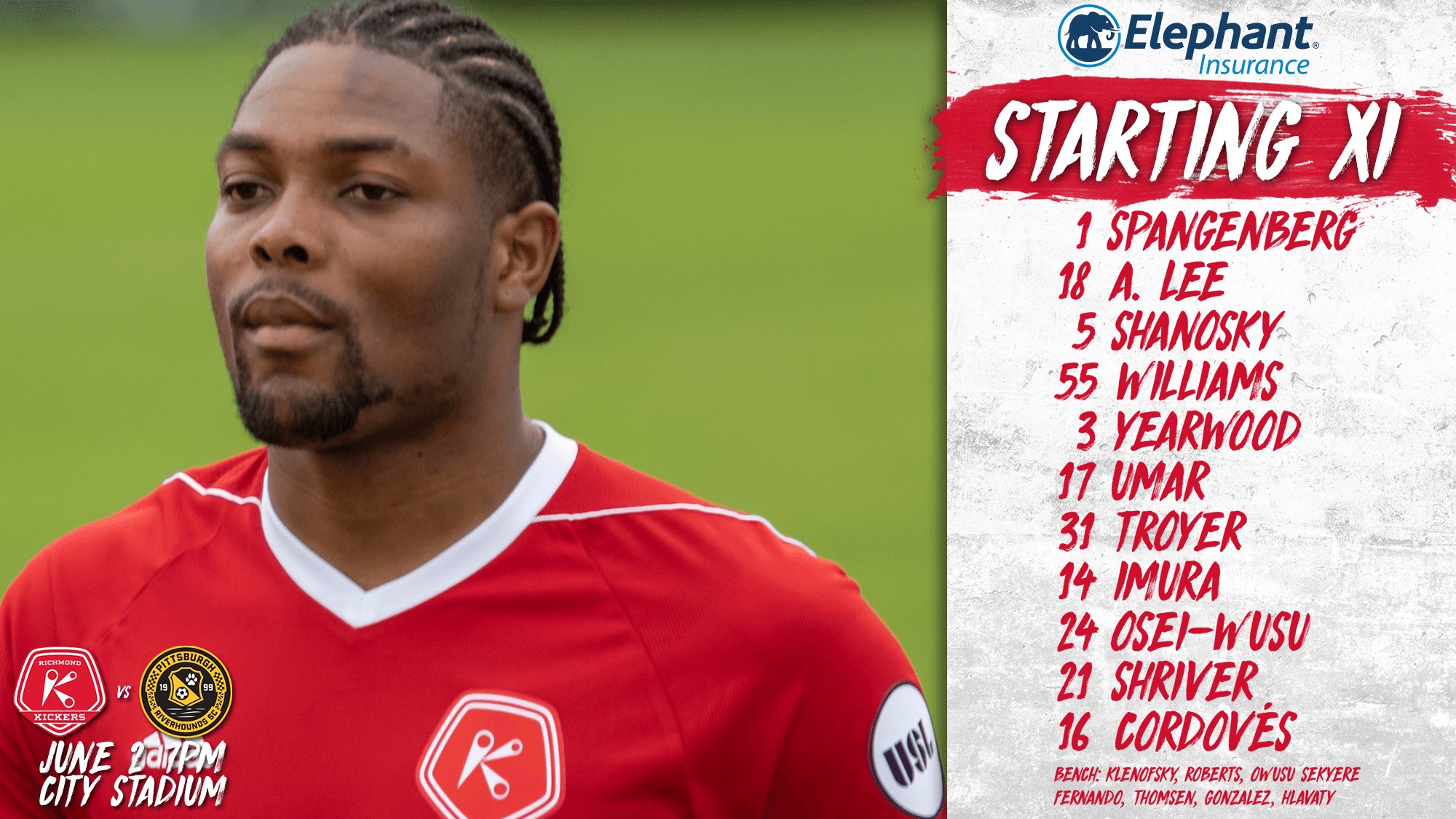 • This match will mark the end of a busy stretch of six games in 18 days for the Hounds as they will also be looking to bounce back from a loss in league play for the first time this season. Falling 1-0 to Nashville this past Wednesday, the defeat snapped the club’s best start in franchise history at 10 games unbeaten, as the Hounds were the last remaining team in the league without a loss in 2018.

• Although they only have one loss, the Hounds have struggled to score goals — and at home they’ve been shut out in each of its last three league games (two 0-0 draws and Wednesday’s loss). On the road, they’ve had success in generating chances as a counter-attacking team (last three road games in all competitions they’ve scored six goals) and will likely look to do the same thing on a much wider field at City Stadium.

• This is the first meeting between the two “Old Guard” USL rivals this season and the 39th all-time in head-to-head history. Richmond has the upper hand in the 19-year series – and recently as well – with the last time the Hounds won came on May 16, 2015. Richmond leads the all-time series 20-8-10, including a 14-3-3 at City Stadium.

• Hounds coach Bob Lilley who has faced off many times over the years against Richmond’s coach Leigh Cowlishaw, hinted after the match on Wednesday that we might see some returnees to the Hounds lineup selections for this match. Both Kay Banjo and Ben Fitzpatrick have been training this week and are no longer listed on the team’s injury report.

MORE ON THE KICKERS

Riverhounds Rabbi put together this in-depth scouting report on the Kickers — citing that while they are not near the top of the USL’s Eastern Conference standings, they won’t be a pushover.

RIVERHOUNDS RABBI SCOUTING REPORT: Richmond have holes, but no pushovers While all three of Richmond’s wins have come at home so far this year, the club has proven vulnerable on the defensive end. The Kickers are one of the seven teams in the East to have allowed two or more goals on at least four separate occasions despite playing one less game than everyone else in the conference. Additionally, they have allowed three or more goals three different times to date.

Both teams are coming off losses. In fact, the Kickers may be the more desperate team after dropping to 14th in the USL standings after last week’s 3-1 loss to Charlotte.

“Last weekend’s game was a tough one because I don’t think the score truly reflected the game,” Ben Shriver, Richmond forward, said. “They were the best team overall, but I think for us to come out on Saturday and put in a good performance is key going forward. We need three points this weekend.”

“Would I like to have seven wins right now instead of four, absolutely,” Lilley said. “We’ll now try to go ten games unbeaten again. The important thing is, when we go to Richmond, is we have the shots, and we have the better chances.”

We don't care if it's Richmond or on Riverside.
We don't have any reasons.
We left them all behind.
We're in a Gameday state of mind.#UNLEASH #Joel

Riverhounds Rabbi Scouting Report: Richmond have holes, but they won’t be pushovers
The Full 90: Richmond vs Riverhounds SC
Loading Comments...