One Annual Pittsburgh Soccer tradition has been nixed, in light of a pandemic. That’s right, for the first time in seven years — there will be no Fourth of July soccer match at Highmark Stadium.

When the Pittsburgh Riverhounds SC’s original 2020 schedule was revealed, they were set to host North Carolina FC for its annual Fourth of July match. For the past two years, this tradition has also included multiple rain delays. Ironically, there is no rain in the forecast in Pittsburgh on July 4 this year.

While there won’t be a game this year, we provide you with this look back at the previous seven editions of the Fourth of July match, where the Hounds have no problem packing the Highmark Stadium stands. For the record, the Hounds hold a 4-2-1 record in these Fourth of July encounters.

Editor’s Note – portions of this article below are republished & updated from previous editions.

For the Riverhounds – the Fourth of July represents a great opportunity to get a big win before a sellout crowd. The Hounds are building a Fourth of July pro soccer tradition, hosting a home league match for the fifth consecutive year.

Since Highmark Stadium opened along the Mon River with a terrific view of Downtown Pittsburgh across the way, the Hounds franchise has made an annual request to the league office to make sure have a game on July 4 as a staple on their schedule.

Attendance for the Fourth of July matches are usually among the best of each season for Pittsburgh’s professional soccer club.

Here’s a look back at the previous memorable Fourth of July tilts at Highmark Stadium along with the “Firecracker Man of the Match” from each previous game:

No doubt about it here — Kenardo Forbes was our Firecracker Man of the Match in 2019.  Here’s what I wrote in my player grades under Forbes:

“Like a boss, he delivered and led his team when they needed him most in executing free kick to give team the lead.”

The Riverhounds SC did what they had to do under the circumstances to pull off yet another win as, 2-0 over North Carolina FC to extend its unbeaten string to five games (4-0-1) and edge closer to USL’s Eastern Conference front running FC Cincinnati in the standings.

Firecracker Man of the Match: Christiano François – scored a net-ripping goal in the 45th minute that gave the Hounds the lead.  Though he didn’t have the assist, contributed to the build up of the second goal, saving the ball from going out past the end line — then getting it to Forbes who served up the assist to Kevin Kerr.

“All I can say is that it was very, very frustrating night for us,” Corey Hertzog, Hounds leading scorer in 2017 who was mired in a scoring drought at that point of the season.

Filmmaker Nick Milliron captured it all here as part of the Pittsburgh Soccer Film series we produced in 2017. Two struggling rivals renewed acquaintances for the first time since a riveting series in 2015 that saw 28 goals in four games.   The first match between the Hounds and Harrisburg City Islanders in 2016 didn’t provide any fireworks.

On a rainy night at Highmark Stadium the teams battled to a hard-fought scoreless tie.

Despite a decent showing on the defensive side, the Riverhounds failed to get a leg up on their in-state rivals City Islanders, who would wrestle the Keystone Cup away from Pittsburgh by earning a 1-0 win later that month, then held on with 1-1 draw in Harrisburg in August.
It was the first professional career clean sheet for goalkeeper Maurcio Vargas, who made four saves.

Murphy ruled that Foster had kicked Vargas’ arm and the Hounds avoided a first half deficit.

Then, central defender Karsten Smith came to the rescue with this clearance… 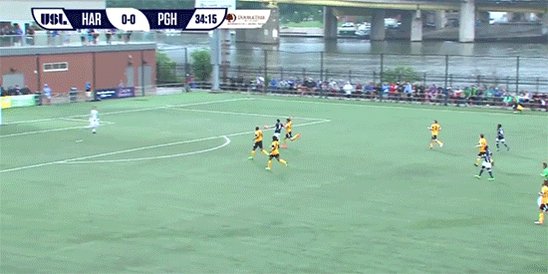 “Our defense played well in front of me, and that was a big play,” added Vargas.

In the second half — Vargas made a pair of diving saves to deny Jose Barill — and came out strongly on a number of other dangerous crosses to help preserve the shutout.

“I don’t know if we’ve been getting a lot of that from either keeper this year. It was great to see tonight.” Before a sellout Fourth of July crowd at Highmark Stadium, the Pittsburgh Riverhounds won their first home game of the year, defeating the Rochester Rhinos 2-0.

That 2014 team used the 4th of July win to spark a streak that included winning eight of 11 games. It was kind of retribution game for Marshall, as the previous 4th of July his own goal was the difference (see below), as he scored and helped anchor a defense that shut out Rochester.

The Riverhounds used the same formula in beating the Rhinos for the second time that season – by scoring second half goals from set pieces.

The goals came from two unlikely heroes, Marshall and Alfonso Motagalvan, who tallied their first goals of the season.
Goalkeeper Hunter Gilstrap recorded his second shutout of the season to lead the Hounds to their second consecutive win for the first time in USL PRO league play in 2014. In a back-and-forth affair against the Mark Steffens’ led Charlotte Eagles, the Riverhounds took the lead twice in the first half with goals from Darren Amoo and Marshall, but the Eagles Jorge Herrara and Nate Thorton would answer just minutes later.
Dallman earns the Firecracker MOM award here as he showed why he was the USL PRO’s league leader in assists that season — setting up both Amoo and Marshall’s goals with pinpoint deliveries.

In the second half, a future Riverhound, Stephen Okai delivered a free kick into the crowded box, and it caught Marshall’s head — and deflected past Hounds keeper Gilstrap to give the Eagles a 3-2 lead that would hold up.

The Eagles win snapped the Riverhounds 10-game undefeated streak in league play — which had stretched since May.  The Hounds reached the playoffs in 2013, their inaugural season playing in Highmark Stadium.

We’ll have to wait and see until next year for another 4th of July Pittsburgh soccer memory.