With its backs against the wall, on the road against No. 2 Clemson, the Pitt Panthers responded after a lackluster, scoreless first half to surge past the defending ACC Champions, 2-0, at Historic Riggs Field on Saturday night.

The Panthers found a pair of second half goals from senior Matt Bailey and sophomore Bertin Jacquesson, while goalkeeper Nico Campuzano made one save with a solid defense in front of him contributing to the clean sheet.

The Tigers controlled play for much of the first half, with the edge in shots (9-3), but only one shot on frame, as Pitt defended well in and around the box.

The Panthers flipped the switch in the second half, stunning the Tigers on the counter in the 58th minute when Veljko Petkovic charged forward into the middle of the final third, then laid off a pass on the left edge of the box for Bailey, who earned his first start of the season.

Bailey sent a ball toward the far post side, which tricked up Clemson goalkeeper George Marks — and the ball slipped inside the post as Valentin Noel crashed the back area.

It was the first career goal for Bailey, who transferred to Pitt from UMBC in 2019.

While Bailey got the start, Jacquesson made an immediate impact and used his fresh legs coming off the bench to explode forward in the 68th minute after a terrific pass from fellow Frenchman Noel.

The French Connection 🇫🇷@Vlnt_Noel finds Jacquesson for the second goal of the match.

Holding the two-goal lead, Pitt controlled enough possession and masterfully navigated through some Clemson attacking moments by evading a few free kick and shot attempts from distance, as the Pitt defensive shape denied the Tigers any clear-cut opportunities inside the box.

With the win, Pitt improves its overall record to 5-3 and are now 2-1 in ACC.

Look for lineups and key game highlights and updates to be posted here.

FINAL:  PITT 2, CLEMSON 0
The Pitt Panthers make a big statement with a shutout win at Historic Riggs Field on Saturday.  They close out the win withstanding some late Clemson pressure on the edge of the box, but they had flipped the script in the second half with sharper passing and making the most of its chances.
80′ — after weathing a bit of first half storm, been in complete control, Pitt is now making Clemson chase the game in the second half with plenty of possession and solid defending deep in final third.
68′ — GOAL — PITT  Bertin Jacquesson
Comes off bench and uses those fresh legs to explode past stretched out Clemson defenders on counter — receiving great ball from Valentin Noel
58′ – GOAL – PITT – Matt Bailey

Petkovic feeds ball to left side — Bailey then sends a ball thru to far post area and it goes in!  Valentin Noel was coming in but didn’t touch it.

Shots: 9-3 Clemson with the edge at half. Thought Pitt played better in final 10 minutes.

Since two early shots, the Panthers need to build out of the back better as they’ve been under constant pressure from Clemson. Tigers with 8-2 edge in shots now.

20′ |  Pitt leaving a lot of room on the counter, as Clemson working their left channel to create four shots in the past five minutes. Pitt’s been fortunate not to be down a goal (or two) in the first 20 minutes. 20′

13′ | Clemson with its first shot of the day high. No score early at Historic Riggs Field.
5′– Guilherme Fietosa getting his first start for Pitt — almost scores a wonder goal after snatching ball away on high press then nearly chips it over Clemson keeper George Marks! Pitt already with two shots (Noel with the other) 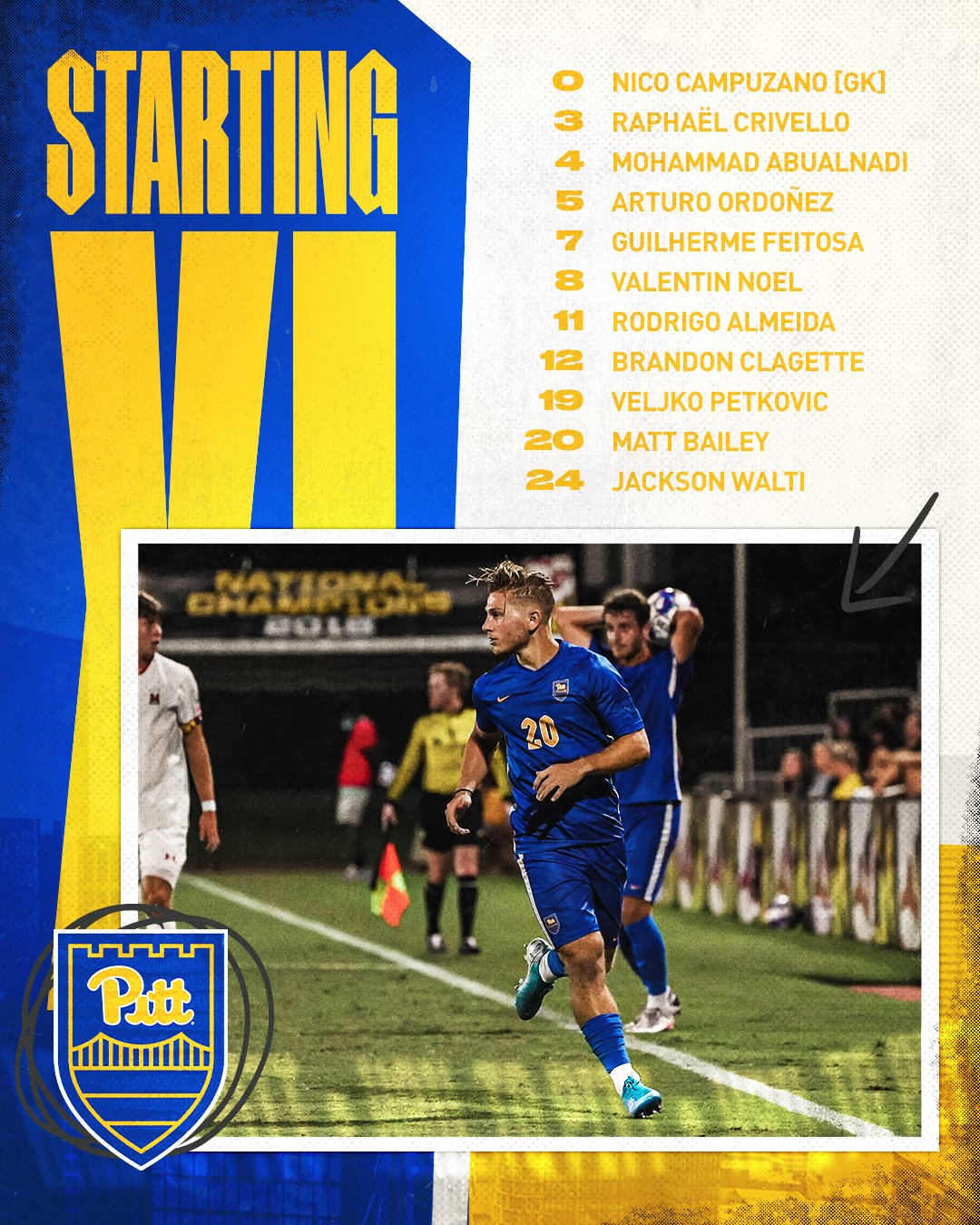 Kickoff for Clemson vs. Pitt is in ✌️ hours. pic.twitter.com/JUcvJdk5ZD

–        The Tigers are winners of three-straight in the series, most recently the ACC Automatic Qualifier match last April.

–        Last season, Clemson and Pitt earned the first and second overall seeds in the NCAA Tournament, respectively. The Tigers fell to eventual National Champion Marshall in PK’s in the Third Round, while Pitt earned its first trip to the College Cup in program history, falling to National Runner-Up Indiana 1-0.

–        The Tigers dropped their first contest of the season Tuesday, Sept. 21 at UNC-Greensboro 3-1. Prior to that, Clemson won seven-straight with six-straight shutouts.

–        Isaiah Reid leads the team with six goals and 16 points, both of which are second and third in the conference, respectively.

–        Callum Johnson and Enrique Montana each have five assists. Both are tied with Panther Jasper Löeffelsend for most in the ACC.

–        Almeida tallied his first assist of the season at Wake Forest.

–        Junior Veljko Petkovic has flashed his offensive abilities early this season, totaling four goals and four assists, both of which lead the team.

–        He recorded his third goal of the season against Lehigh, aiding the Panthers to a 2-1 victory over the Mountain Hawks.

–        Petkovic tallied his second multi-assist game of the season with two assists at home vs. No. 4 North Carolina while also scoring his fourth goal of the season and first game-winner of the year.

–        Petkovic scored his fifth goal of the season at Wake Forest.

–        The midfielder currently ranks tied for seventh in school history for career points with 57 (20 goals, 17 assists).

–        He was named ACC Offensive Player of the Week Aug. 31 and earned College Soccer News and TopDrawerSoccer Team of the Week honors.

PITT RANKED NO. 15 IN UPDATED POLL